When I first looked into longtime independent developer Jeff Vogel’s upcoming Queen’s Wish: The Conqueror, I found a number of things I expected: turn-based combat, a role-playing game with choices, and Spiderweb Software’s classic art style. What I didn’t expect to find was a game that involved managing shops and building forts.

Or a parable about how it’s time for the Baby Boomers to step aside in the United States and for the younger people to take over.

“Nobody from my generation has ever run this country, and I’m old! I’m an old guy! I’m well into middle age,” Vogel said in a video call. “Part of it is my fantasy that at some point, I want every Baby Boomer to say, look, we’re tired. We want to retire to Boca. We want to catch up on 30 years of episodes of Wheel of Fortune. You guys run the country now. You’re going to screw up a lot, but it’s your time. That’s your job. And so I have my own frustrations about that.”

Queen’s Wish is coming out later this year for PC, Mac, and iPad. Like all of Vogel’s earlier games, it’s a turn-based RPG. But this one has more crafting than he’s tinkered with in the past. Your family has had enough of your lazy ways and has decided it’s time for you to join the family business — ruling an empire. You do have a party, but instead of friends helping one another face danger, it consists of underlings assisting your rule of Haven, an empire that’s in shambles after facing a calamity.

We also discuss how Vogel has created a new engine for Queen’s Wish and Apple’s Arcade service — something he thinks he’s too small for but is keen to discuss with Apple. This in itself is remarkable to me, as Vogel once decided to stop publishing on iOS. 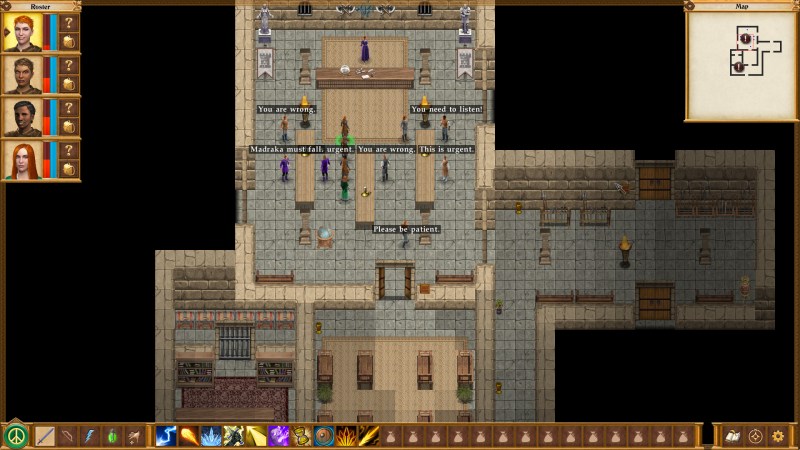 Above: Your family tries to provide wise council. Sometimes.

GamesBeat: How is this world for Queen’s Wish different than what you’ve done with Avadon, Avernum, and some of the other games you’ve made?

Jeff Vogel: There’s a lot of differences, both in the game setting and the game system. For this, I really have been pushing hard to try to do a lot of new stuff and innovative stuff.

It started with the idea that I’m always a sucker for games where it lets you build up your town, and you can build shops and sell things and make money. I always just got a big kick out of that. But I wanted a game where that was a major part of it, where you’re trying to build an empire and build industry and have all of these miners and craftsmen and artisans or whatever working to serve you, and that’s where you get your power from. If you’re a person wandering around in the wilderness, you’re sort of powerful. If you have this gigantic industry behind you, then you become way more powerful. That was the core idea for it. And then I thought, well, where does that setting come from? Why do you have that much authority?

The other thing about it is, I wanted it to be in part about a family story. I have a family now. I have kids, teenagers. I don’t think computer games deal with that very much, in a funny, interesting way. In the game you’re the youngest prince or princess, the youngest child of the family business, and you’ve always been a layabout, a ne’er-do-well. At a certain point your family says, OK, you need to join the business. You need to do your job. You need to earn all of this wealth you’ve been given. They kick you into a magical portal and you fall out in this wilderness, and you can’t come back until you’ve proven that you can join the family business.

Of course, our games always have tons of choice and options. Once you get there, you find you don’t have to do it. You’re free now, and you can start exploring and doing your own thing and making your own choices. But there will always be people in the world who have their own agendas and uses for you, and they have their own ways to bribe you. Everyone’s going to be bugging you and trying to get you to help them in their own way. When I started this game I wanted to do a bit less dialogue, because I find writing dialogue really exhausting. For the last year I’ve been doing nothing but writing dialogue.

I’m really happy with how this game turned out. I think it’s a cool story, cool characters. The way your character advances and the way he gains power really feels innovative. I’m excited about this series. That was a long monologue, but that’s a lot of what’s on my mind about it.

GamesBeat: There seems to be a humor about it that I haven’t seen in your other games.

Vogel: My games always have a bit of humor. I can be really funny, but I’m also a gigantic civics nerd and politics nerd and history nerd. I’ve been saying for decades that–this game has a lot of funny bits in it, a lot of funny lines, a lot of humorous situations. But in the end it always gets–whenever I write a game, it always ends up being overwhelmed by my fascination with humanity and governments and history and systems. Just why things work the way they do. Like how people can start out with a great idea and a great goal and all the ways that can go wrong. What’s the quote? From the crooked timber of humanity no straight thing was ever built. It’s one of my favorite quotes. I love writing games where everyone starts out with a bunch of great ideas and it all falls apart.

GamesBeat: What is the family business? Is it more than just ruling an empire?

Vogel: No, that’s it. A queen is a provider of services. A queen provides the service of governance and is paid in return with all of the authority and wealth of being the queen. Now, if you stop providing the governance service, then you are fired. And the way you are fired is you wake up in the middle of the night and there’s a bunch of peasants there and they cut your head off. When the queen comes to you and says, you have to join the family business, what she’s saying is — this is explicit in the game from the beginning — look, we get to live in this castle, but all of our peasants want food and they want to feel safe. The moment they stop getting those things they’re going to kill us. You have to get out there and help us keep control or the bad things happen. That’s always a thing running through the story. If you do things too slowly or don’t do enough, your siblings and your mother are always ready to guilt trip you.

GamesBeat: Are your siblings your rivals, or just making you feel guilty?

Vogel: They’re your rivals. They’re your advisers. They love you, but they may be a bit frustrated with you. I tried to give the player the ability to really build a character, to make someone who’s really industrious or really lazy or really mean and cruel or really nice. The game starts with two things. You’re a prince, and up to now you always take your time lying in bed or going on vacation. You’re the goof-off. From the start of the game, you can be whoever you’re worth, but your siblings and your mother, they love you dearly in their own ways. But it starts with the fact that they’re so frustrated with you that they say: This is it, you get authority now, whether you like it or not. We’re old. We’re tired. Maybe we didn’t do enough to prepare you to run the world. But we don’t have a choice anymore. Now you have to go run the world. Which is — in a sense, sometimes that’s how I think that our kids and our kids’ friends are.

My kids have had a very comfortable life in a lot of ways. But at some point those kids, and everyone else in their generation, are going to have to run the world. I don’t think we’ve done a very good—the older people haven’t done a very good job, or for that matter my parents haven’t done a very good job with my generation of saying to us, OK, it’s time for your apprenticeship in running this country, in running the world. Part of this is—it’s a fantasy. Part of it is my power fantasy, that right now, all of the people—there’s a presidential election coming up. All of the front-runners are, what, in their mid-70s? Nobody from my generation has ever run this country, and I’m old! I’m an old guy! I’m well into middle age. Part of it is my fantasy that at some point, I want every Baby Boomer to say, look, we’re tired. We want to retire to Boca. We want to catch up 30 years of episodes of Wheel of Fortune. You guys run the country now. You’re going to screw up a lot, but it’s your time. That’s your job. And so I have my own frustrations about that. A lot of that is in this game. Writing a game, for me–from the outside, from the beginning, from the descriptions, they all kind of sound like the same game. I entirely realize that. But they all end up very different, at least to me.

GamesBeat: They do. There’s no denying that. 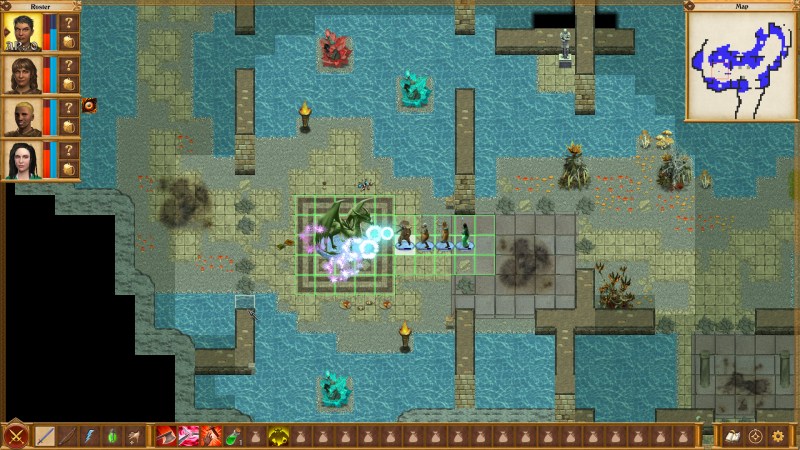 Above: Dragons. It had to be dragons.

GamesBeat: Getting back to that, I was reading through some of the materials. It says it’s up to you if you want to reclaim or liberate colonies. Has your empire fallen apart? Is it in decline, and you’re trying to bring it back? Or are you trying to be an expansionist here?

Vogel: I hope it’s going to be a trilogy of games. In this game, the empire of Haven is very strong and stable and wealthy and prosperous. Except for this one land, which was taken over and everything was running tickety-boo, and then there was a sudden calamity. For the people of Haven, the crops started failing and the wolves started coming out of the forest. They were afflicted by storms all the time. They were driven out. They don’t know, nobody knows, at the start of the game, where this came from. It is a fantasy game. There’s dragons. But nobody knows where this calamity came from, and this is the one land that Haven lost. It happened under your mother’s reign. Any sort of failure on her part galls her greatly. She’s quite a perfectionist. She’s determined, no matter what, that this blot on her record is going to be corrected, and you’re the person who’s going to correct it.

GamesBeat: So you have a mess to clean up.

Vogel: Yes. You show up on—the continent is called Sacramentum, and when you show up everything is a gigantic mess. There’s monsters everywhere. Buildings are being torn down for their copper. You’re immediately given a long list of fires to put out. It’s an RPG. There have to be missions.

GamesBeat: The world usually isn’t in such disarray?

Vogel: It is an empire that’s normally very organized. Everything is kept very quiet and very tidy by whatever means are felt necessary at the time.