Journey to the Savage Planet is a zany and upbeat game from developer Typhoon Studios and publisher 505 Games. You explore an alien planet. The game is coming in early 2020 for the Epic Games Store, Xbox One, and PlayStation 4. But we got to see it at a recent 505 Games preview event.

You’re an employee of Kindred Aerospace, which proudly touts its rating as the fourth-best interstellar exploration company. The rah-rah spokesman for Kindred Aerospace, Martin Tweet, welcomes you to the cause, and he’s very hopeful and ambitious and not really worried about your welfare.

The company sends you to an uncharted planet deep in a far away corner of the universe with high hopes but little equipment and no real plan. Your job is to explore, catalog the alien flora and fauna, and determine if this planet is fit for human habitation. 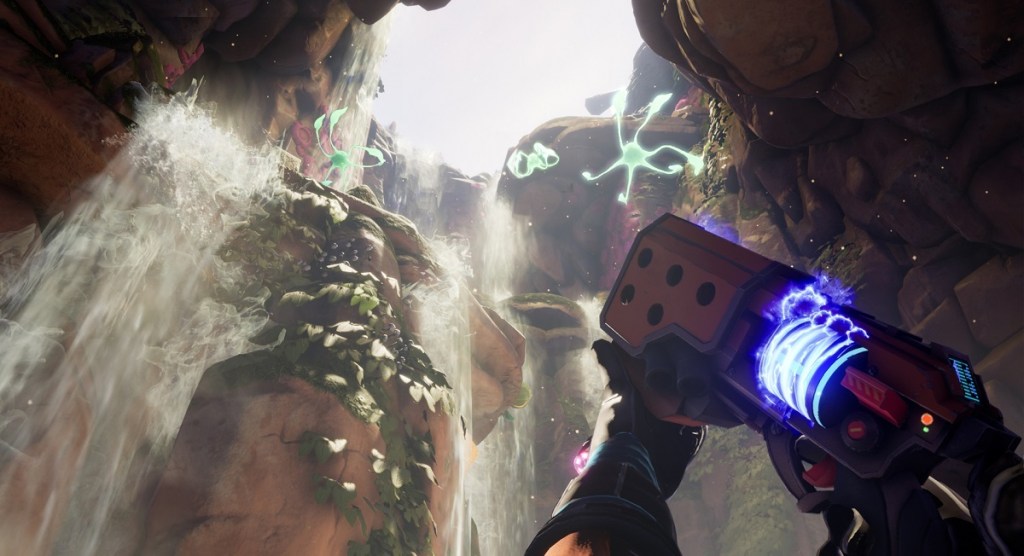 Nothing is business as usual in this sci-fi comedy first-person action adventure title. You start out in the landing capsule of a spaceship. You have to suit up and hit the ground.

You can walk or run around the environment and hold your ray gun. Immediately, you can see lots of colors and pretty fauna and nice landscapes. You also encounter cute monsters, like the wrinkly valley pufferbird. You can shoot it with your ray gun, and I saw no evident consequence for doing so. The creature turns into a pile of green goo. 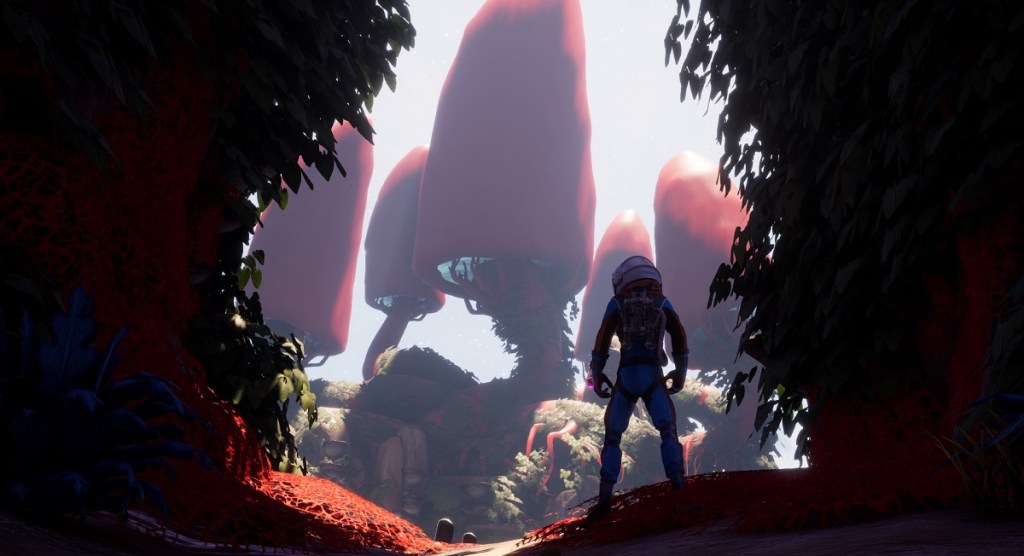 Above: Journey to the Savage Planet’s towering mushroom-ish trees.

In the short demo, I was assigned three tasks. I had to craft a grapple from the junk I collected on the planet. I was also supposed to scan an alien teleporter and then find and kill Craglaw. I’m not sure what the latter was, as I didn’t have time to do it. But I enjoyed wandering around the planet.

You can go up to just about any creature, rock, or plant and scan it. You can also attack creatures in the world, but you have to be careful about the ones that fight back. I went over to an ice-covered lake and initiated a fight with some tough creatures, and they took me down. This happened a couple of more times, so I just decided to explore. I could cross over ravines using my hover-jump ability. And I tried to solve various puzzles to make my way through the natural barriers of the landscape.

I found the alien teleporter after going through a series of underground caverns, but I got lost after that. I also got stuck trying to get over a mountain range, and then I ran out of time. So, in conclusion, it’s cute, it’s funny, and it will have a lot of gamers intrigued about exploring a brave new world.