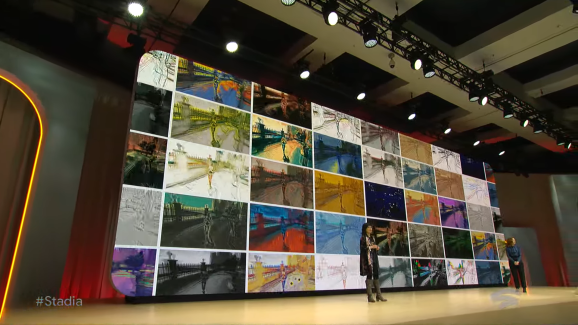 Google is about to launch its Stadia game streaming service in November. The company is promising to end the console cycle for good. For now, however, Stadia’s lineup of games is definitely reminiscent of fledgling consoles from the past.

The company revealed today that it will has prepped 31 games so far. Those come from 21 developers and publishers. Highlights include the just-announced Baldur’s Gate III from developer Larian Studios, which is not exclusive to Stadia. You can also get Destiny 2 at no additional cost if you subscribe to Stadia Pro for $10 per month. Stadia Pro is also how you get 4K HDR streaming quality instead of merely 1080p.

Google’s Stadia Games and Entertainment studio, however, is still spooling up for its first projects. That means Google is relying on third-parties and potential first-party partnerships with external studios. To that end, Google is publishing Get Packed from Coatsink and Gylt from Tequila Works. Coatsink previously worked on Kingdom: Two Crowns, and Tequila Works is known for the excellent murder mystery The Sexy Brutale.

Every publisher, developer, and game announced so far

So do you buy games or what?

Google Stadia isn’t exactly a Netflix for games. Sure, it is streaming content from the cloud, but you are going to have to buy most of what you play — at least at this point. You do get all of Destiny 2 and other, unannounced games in the future with Stadia Pro. But you should probably expect that you’ll have to pay about the same for most games as you would on Steam or the PlayStation Store.

That could change over time. Stadia Pro could turn into something to match Xbox Game Pass. For now, this opens up the door for Microsoft to swoop in at E3 and blow everyone away with its streaming service, Project XCloud.

If Microsoft finds a way to combine Game Pass and cloud streaming into a one affordable monthly price, it’s going to make Stadia look like a bad deal. That’s maybe a bit unfair to Google because games will look much better on its hardware due to XCloud running on Xbox One S hardware. But people who don’t already own a PC, Xbox One X, or PlayStation 4 Pro may not care as much about graphics as they do about having a massive library.

But Google has deep pockets, and it could continue to improve Stadia Pro over time. And if the technology works well, it may attract an audience willing to wait.