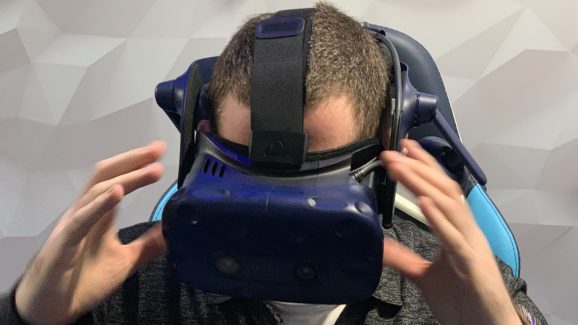 Having already released Vive Pro Eye in China and Europe, HTC today began selling the enterprise-class virtual reality headset in North America, and there’s one surprise: It starts at $1,599 (U.S.), rather than its roughly $2,000 price elsewhere. But there may be other costs for U.S. and Canadian customers to consider.

Featuring OLED screen technology running at a 2,880 x 1,600 pixel resolution, Vive Pro Eye is an upgrade to HTC’s standard Vive Pro, differentiated largely by Tobii eye-tracking hardware and support for foveated rendering. The headset is bundled with two of HTC’s 2018 hand controllers and two tracking base stations, but developers can create apps that you substantially control with your eyes, moving cursors and selecting items just by gazing.

The new headset’s base $1,599 price includes everything mentioned above, plus a link box, DisplayPort cable, USB 3 cable, and necessary power adapters, as well as cleaning and earphone adjustment parts. Tax isn’t included, which will drive the price up somewhat, but shipping is free. If that sounds too expensive to purchase in one shot, HTC has teamed up with PayPal to offer Vive Pro Eye on a 24-month installment plan for around $73 per month, or $1,746 over 2 years.

Another semi-optional expense is the Vive Pro Eye Advantage services package for enterprises, which costs £198 ($252) in Europe and $200 in North America. It adds a two-year warranty, 24-hour email response guarantee, and expedited repairs to the hardware bundle; HTC recommends it to enterprise customers but doesn’t emphasize it as much as it did during the European and Chinese launches.

The Vive Pro Eye is in stock now for immediate shipping and can be ordered here. Users who don’t need the eye-tracking hardware will get an otherwise identical experience from the less expensive standard Vive Pro, which sells for $1,399 — or $200 less.