Game Changers: Inside the Video Game Wars is a documentary airing soon on the History Channel (now known as History) that captures the great moments of the dawn of the video game industry.

Like the book Console Wars (but unrelated to it), Game Changers tells the story of the personal battles that gave rise to the multibillion-dollar video game industry.

Brought to life by Academy Award-winning director Daniel Junge, this documentary is a tale of brilliant innovations, colossal failures, and ego-driven rivalries on a massive scale. I laughed as I watched fresh interviews with the likes of Howard Lincoln, former head of Nintendo of America, and Tom Kalinske, former head of Sega of America, and their competition during the Sega Genesis era. It was like hearing a couple of gamers trash talk each other, though perhaps more politely.

It is a 50-year-long, multi-generation epic featuring corporate coups, industrial espionage, and the promise of unimaginable riches being just one cartridge away. Told in chronological order and featuring the sons of the brilliant inventor of the first video game console, Ralph Baer, the co-founder of Atari, Nolan Bushnell, Trip Hawkins, Manny Gerard, Shinobu Toyoda, and many more experts in the gaming industry, this documentary highlights the programmers, engineers, management, and business practices they followed to compete against each other.

I talked with Megan Harding, the executive producer of the show for History, about the making of the film. Here’s an edited transcript of our interview. 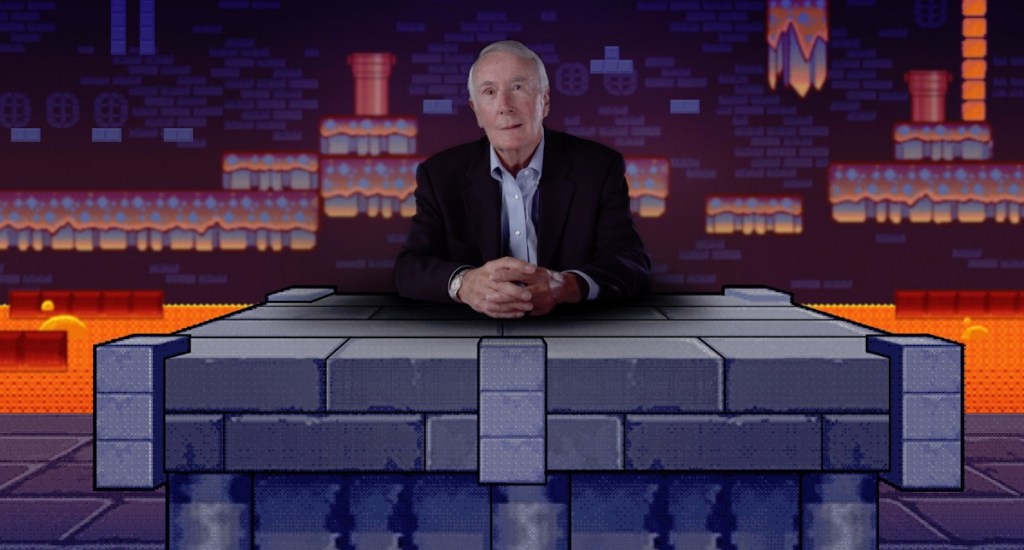 Above: Howard Lincoln is the former chairman of Nintendo of America.

GamesBeat: Can we hear more about Game Changers and why you decided to do it? What was it like to make it?

Megan Harding: The idea to do it actually came from Mark Baer, Ralph Baer’s son. He had actually approached one of our executive producers with Ralph’s story. We said, “Wow, we didn’t know about this.” We thought it was incredible. Then, when we did some more research, we realized that he was pretty much the kickoff point for the whole video game industry. This little guy puttering away in a basement in New Hampshire had unwittingly spawned this billion-dollar industry. We thought that maybe he would be a good starting point to tell a very limited part of that history, those early days.

We were fascinated by what we considered the wild west, where it just seemed that there were no rules. People could do whatever they wanted. Nobody knew what it was, so they could behave as they saw fit, which obviously resulted in some pretty crazy times. But at the same time it was this hotbed of creativity too. They created these games that we all love from our past. It’s really interesting, because of course now my kids love to play all those classic games that I grew up with. I thought that there must be something in that, what was happening in those times, if those games still resonate with young players who have all sorts of games and technology at their fingertips.

Daniel, our director, he grew up with Atari. He thought it was important to include Nolan Bushnell and the story of Atari in that, which is a great story. What came out of that, of course, is because there were no rules — people were stealing things. People were, shall we say, borrowing ideas.

GamesBeat: Lots of lawsuits, lots of success having many fathers.

Harding: Correct. It’s all part of it. And then we started looking at — there were all these great archetypes as well. Nolan Bushnell is one archetype. Ralph is another totally different being. The industry would have happened without them, I would say, in my opinion, but that particular combination probably made things happen faster than they perhaps would have. If it was just Ralph in his basement, he couldn’t market and sell and create a company like Nolan could. You needed both, even though I’m sure they were not particularly good friends at the time.

GamesBeat: That was the interesting thing about the documentary. A lot of them were at odds with each other, but you guys were able to get to most of the living people here and get their different points of view. They were all directly fighting with each other. It’s very interesting. Was it hard to get everybody on camera?

I know that other people have covered the story in different ways, but I don’t think it’s been truly captured, the spirit of that era. They were pretty fearless. They knew that they were pitted against each other. They certainly didn’t hold back in our interviews. There was nothing that anybody ever told us that was off the record. 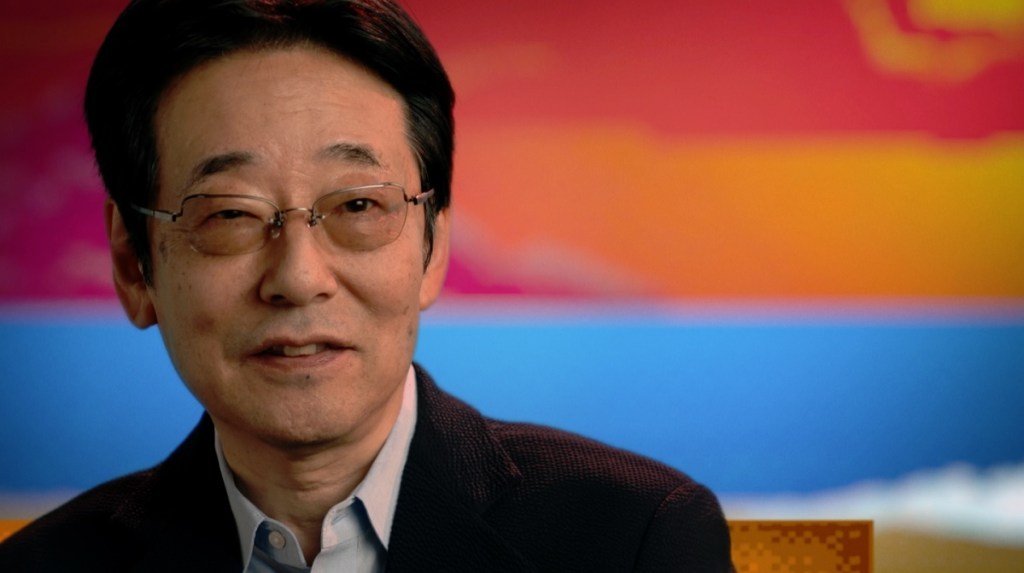 Above: Shinobu Toyoda is former COO of Sega.

GamesBeat: I thought that you captured that well with the letter that Howard Lincoln wrote to the Sega guy. That was very sportsmanlike.

Harding: I guess so! I think that’s what it was. From his perspective, he loved — Howard Lincoln really loved to fight. He’s a lawyer. He really thrived on that. Tom Kalinske gave a good fight, and so there was a lot of respect between them. He said it’s not personal. I don’t know whether I entirely agree with that, because I think it was pretty personal at the time. But there was still a lot of respect between them.

GamesBeat: I cover the game industry now, and it’s hard for me to imagine that Sony, Microsoft, and Nintendo would get together and chat about the competition these days. There are so many billions of dollars at stake that they just don’t want to have anything to do with each other.

Harding: I know. They don’t need to now. It’s an interesting time. In fact, one of the things that we thought about — we didn’t know where to end the documentary. There’s a couple of ways you could do it. You could easily just do it to the crash of ’83-’84, just focus on Atari, and expand out to some of the other companies that were around at the time. But we decided to take it up to the launch of the Sony PlayStation, because we considered that the real start of the new industry. It’s the moment when everything changed, and innocence was lost, if you like. Not that they were particularly innocent, but you know what I mean. I feel like that was the defining moment.

GamesBeat: It’s interesting that their memories are so sharp, even though so much time has past. Maybe that makes it easier for them to talk about it, because it’s so long ago.

Harding: That’s partly it. They’ve got nothing to lose. In many ways, I think it’s looking back at a time when they had a lot of fun. I think they enjoyed reliving it with us. 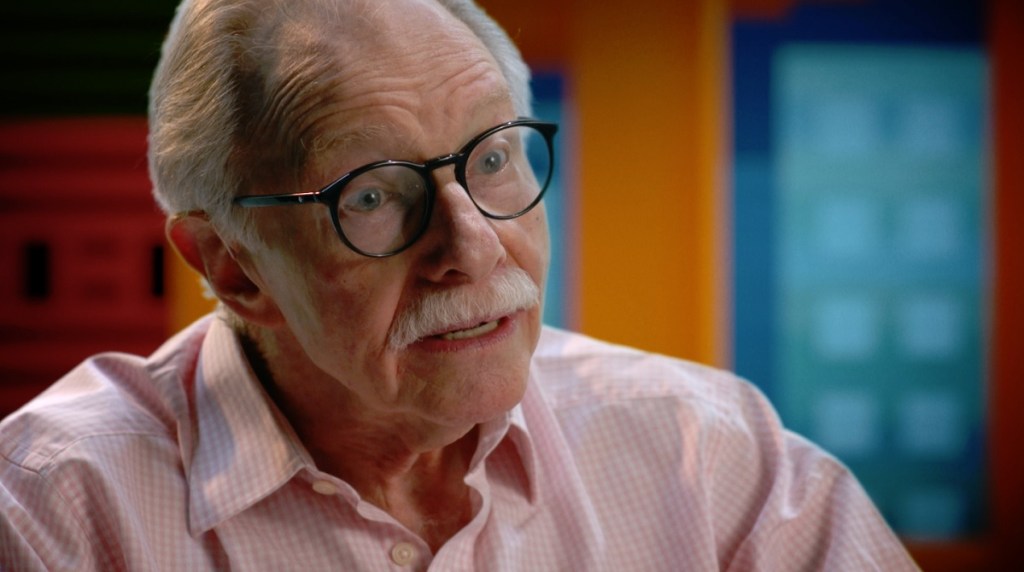 Above: Manny Gerard was an officer at Warner Communications.

GamesBeat: I liked watching it because it reminds me of a lot of the history in Silicon Valley. The people who lived it are still alive. You can still talk to them.

Harding: Which is awesome! And we should be documenting it all now, because that might not always be the case. The stories are pretty remarkable. It’s much the same. It’s really intermingled. Those early days in Silicon Valley were the wild west as well, with a lot of the same stuff going on. There were no rules, because nobody really knew what it was that they were creating yet.

GamesBeat: I was curious about Nolan Bushnell. He spoke at our conference recently. I know that last year, all of the hot tub controversy came up again and cost him that lifetime achievement award. I assume he has no regrets about those days.

Harding: I don’t think so. We didn’t cover a lot of that. That wasn’t our intention. But I do think it was important to us to include Nancy, his wife. She makes a salient point, that it really was a different time. Certainly the women that we spoke to — there are others who think differently, but of the women we spoke to, nobody ever thought that there was anything inappropriate going on. I feel like they thought they were just very much living in the times. They didn’t feel pressured or threatened into anything in any negative way. Obviously we spoke to only a very small number of women. 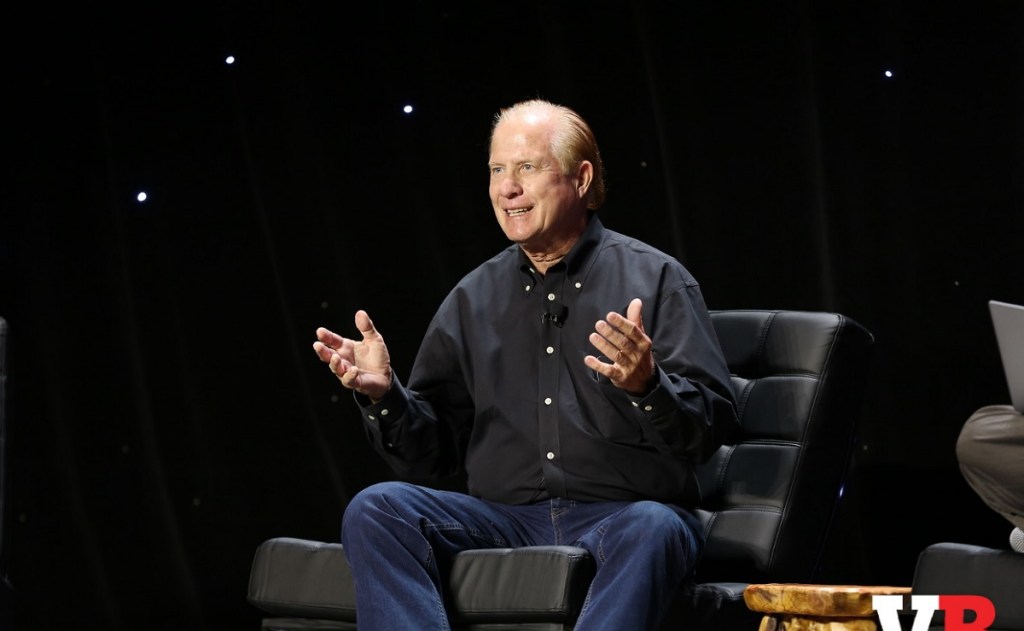 Above: Tom Kalinske, former head of Sega of America.

GamesBeat: That’s what I’ve found as well. It was good that you had them in the documentary. Having his wife in there also includes people who are normally kind of left out of these stories.

Harding: That’s true. That was one of the things that came out of our early conversations with History Channel. They were very insistent, and we were totally in agreement, that it’s not just about the heads of the companies, although they’re obviously very compelling. It’s also about the lesser-known voices and hearing about what it was like for them. That was an important part of our booking process. And in many cases that’s where the really fun stories come out.

GamesBeat: It’s interesting that people consider this to be important history these days. Something that was once written off as silly is now important.

Harding: It’s true. And obviously, when you look back at what they were creating then, it’s totally different to what the big game companies create now. It all has to come from somewhere. It’s incredibly relevant history, cultural history, because it came out of a time that allowed that to happen. I don’t think there’s any mistake that Atari was in Silicon Valley, which was close to San Francisco, which was the heart of the hippie movement. It’s all related. That’s why this history is important. It speaks to the culture of the day. It was a lot of fun to make. It was great to just meet these people and hear their stories.