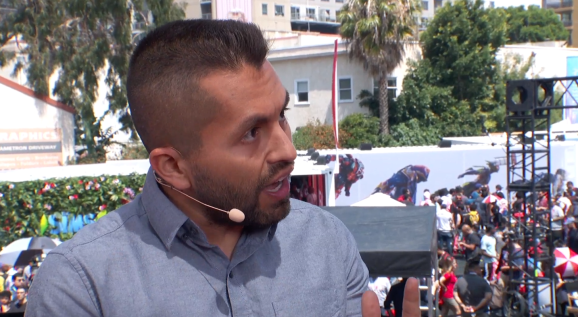 FIFA Soccer 20 is dribbling down the pitch on September 27, EA announced today at EA Play at the Hollywood Palladium ahead of the Electronic Entertainment Expo 2019 next week in Los Angeles (and September 19 for EA Access fans). It’s coming in a big year for the beautiful game — 2019 is the Women’s World Cup, which is underway in France.

Lead gameplay producer Sam Rivera said after talking to 3,000 players, EA developed a new system — football intelligence — that works on on-the-ball, off-the-ball, and the ball (physics in this case). It works on the AI. Gameflow will give more time and space to the dribbler, and Rivera said more 1-on-1s will help player skill stand out. It’ll also give you more AI team support for when you’re controlling the ball.

The ball’s physics received a revamp as well, giving you better bounces and realistic reactions from when you kick it. Rivera said it makes the entire FIFA experience feel “fresh.”

Pace is getting tweaked as well. Player physical attribute will be more important. Skill moves are getting tuned, and the team is adding new ones — with the goal of giving a more realistic outcome after you combo these.

Earlier today, EA released a trailer for Volta, an NBA Street-like mode for FIFA 20. In the trailer, we see people in plain clothes playing footy on concrete and smaller arenas. The idea behind Volta is to bring a more “street” take on the beautiful game. One of the things that makes soccer so attractive worldwide is that all you really need is a ball and people to play the game — a parking lot, an abandoned field, and even a tiny arena can be a soccer pitch when needed. And Volta captures this spirit. It’ll have a story mode and a way to build a player character, as other EA Sports games have these days.

FIFA is a cornerstone franchise for EA. It was in the top-10 best-selling games of 2018. In addition to strong annual sales — it drew 45 million unique players on PC, PlayStation 4, Switch, and Xbox One during fiscal year 2019 — the publisher also makes money off in-game transactions as players purchase loot boxes for Ultimate Team (think fantasy football, but for soccer, where you assemble a squad of players). In September, EA announced that it had sold 260 million copies of FIFA since the franchise’s launch in 1993, along with 193 million downloads for FIFA Mobile.