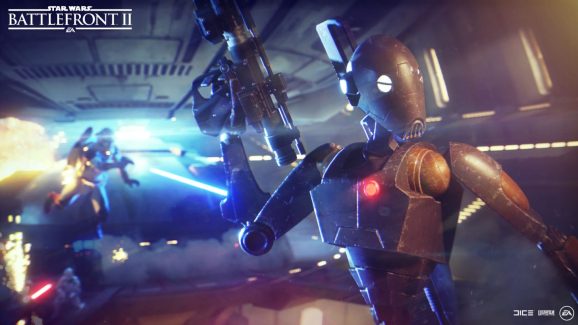 Star Wars: Battlefront II has continued to chug along, and at EA Play today in Los Angeles, the publisher announced a series of small updates coming to the game. And it all focuses on The Clone Wars. It’s all part of EA’s news for the Electronic Entertainment Expo (E3) 2019 next week in Los Angeles. The popular Capital Supremacy mode is coming to Naboo on June 26, bringing urban combat between the droid armies and the clones of The Old Republic.

The June 26 update is also bringing a new unit for the Separatists — the deadly Droideka (those rolling balls of death with shields that the Jedi hate) and the TX-30 tank for The Old Republic.

Capital Supremacy rolled out on March 26, and it’s a surprisingly engaging mode. You fight either as the Republic or the Separatists, and the goal is to force your foe off planet and then storm onto their capital ship … and then blow it up. Matches can be see-saw affairs that see one side or the other repulse their foes off the ship and back to the planetary battlefield. After not touching Battlefront for nearly a year, I gave this a go and have been playing several times a week. It’s a fun mode, with some battles running more than an hour.