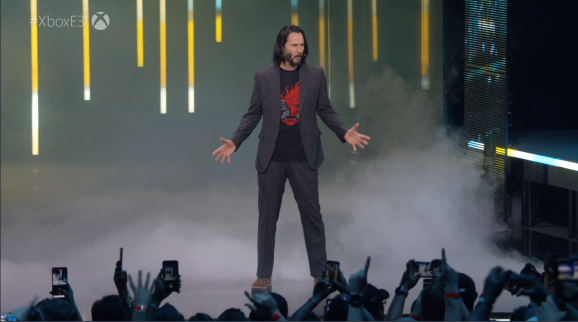 CD Projekt Red showed off a new demo of Cyberpunk 2077 at Microsoft’s Xbox press event at the Electronic Entertainment Expo (E3), the big game trade show in Los Angeles. And actor Keanu Reeves surprised everyone by coming out onstage to say that he would be in it.

The game debuts on April 16, 2020. You can preorder it today in the link above, and the fare includes a Collector’s Edition.

“I’m always drawn to fascinating stories,” Reeves said, noting how the game is set in the future where body modification is the norm.

The trailer reveals one of the key characters of Cyberpunk 2077, Johnny Silverhand. The legendary rockerboy is played by Reeves (The Matrix trilogy, John Wick series, Johnny Mnemonic). In addition to his appearance and voice, Reeves is also providing full-body motion capture for the character.

The video started out with a thug collecting a payment and then getting in a car. But they are ambushed on the way out and the character’s friend is killed. As the character washes himself off, the guy who received the payment in the form of a chip attacks again, saying the theft was going to bring down a bunch of heat on everyone.

Then Reeves came onscreen and then walked out on stage, getting a roar of applause.

We all know that CD Projekt Red has a hell of a game in Cyberpunk 2077, which the company revealed in a 48-minute gameplay video last year.

The video showed an amazingly detailed open world, as the narrator said the ambition was to create “the most believable city in any open world to date.”

The original demo showed how everything in the game revolved around your decisions. If you wanted to go in guns blazing into a gang’s fortress, it probably wasn’t going to end so well. But if you took a less violent path, you could find stealthier ways to get into the gang’s compound and snatch the goods that you needed.

Last year’s demo of the upcoming game promised deeper the details of the open world, with fascinating futuristic touches such as cranial chip implants, robotic body modifications, hyperfast video communications, and surveillance drones. The dystopic city seemed like a living thing, and the choices for getting things done seemed like they had no limits. You could be as peaceful or violent as you wished.

It also had a hyper-sexualized environment, with lots of streetwalkers, sexy ads, and naked animated women who looked real. This hyper-sexualized part of the game is likely a small part, but it will no doubt prove to be controversial when the game comes out (CD Projekt Red has not set a launch date yet).

It’s a mature game, aimed at adults who can deal with subjects like nudity, drugs, and murder. For this game, it doesn’t feel gratuitous. It is the world this team is trying to create.