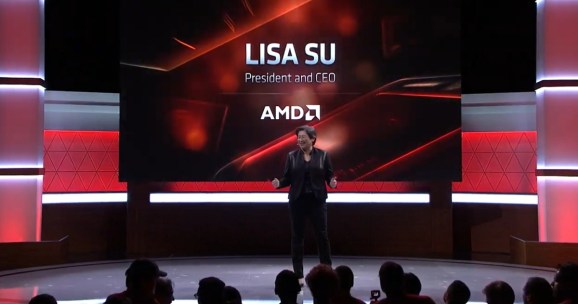 CEO Lisa Su said in a speech at the Electronic Entertainment Expo (E3) that AMD is unveiling the Ryzen 3000 Series processors and the Radeon 5700 Series graphics cards. The Ryzen 3900 X has 12 cores and runs at 105 watts and costs less than half the price of Intel’s competing chip, Su said.

The chips are based on the new Zen 2 microprocessor cores and the RDNA graphics architecture. Variants of those technologies will go into both the PlayStation 5 from Sony and Microsoft’s Project Scarlett. Those are new consoles coming in 2020. AMD chips are also being used in the Google Stadia data centers for the cloud gaming service coming in November.

Zen 2 has double the floating point and 15% better instructions per clock cycle than Zen from 2017, Su said.

“What you see is incredible performance for these titles,” Su said. “You see maximum gaming performance.”

Su showed the 3900 X processor running PC games such as The Division 2 from Ubisoft.