Mobile market research firm App Annie knows our phones are practically game consoles, and it’s sharing some stats to show just how many of us play games, how long we do so, and what genres are on the rise.

And just how many games come out in one year on Apple’s App Store and Google Play.

App Annie released its “State of Mobile: 2019 and beyond” report this week, sharing data on what it’s gathered and analyzed about the worldwide mobile market in 2018. It found that one-third of all global downloads in 2018 were for games … and that developers and publishers released over 2.7 million games on Apple’s App Store and Google Play. This, of course, doesn’t count games on other app stores or ecosystems.

And this report from App Annie reinforces what another market analyst, Newzoo, forecast earlier this year — that more than 2.4 billion people will play games in 2019 and that the mobile gaming market is pushing nearly $70 billion. App Annie finds that 74 cents of every dollar spent in the app stores are for games, and 95% of these are from in-app purchases versus paid games. Games run the mobile app economy.

One stat that I didn’t find surprising: the majority of time spent in games is from people 25 and over. After all, most teens and children can’t afford phones, even if it feels like every kid you see out-and-about these days has a smartphone.

Here are some highlights from App Annie’s report. 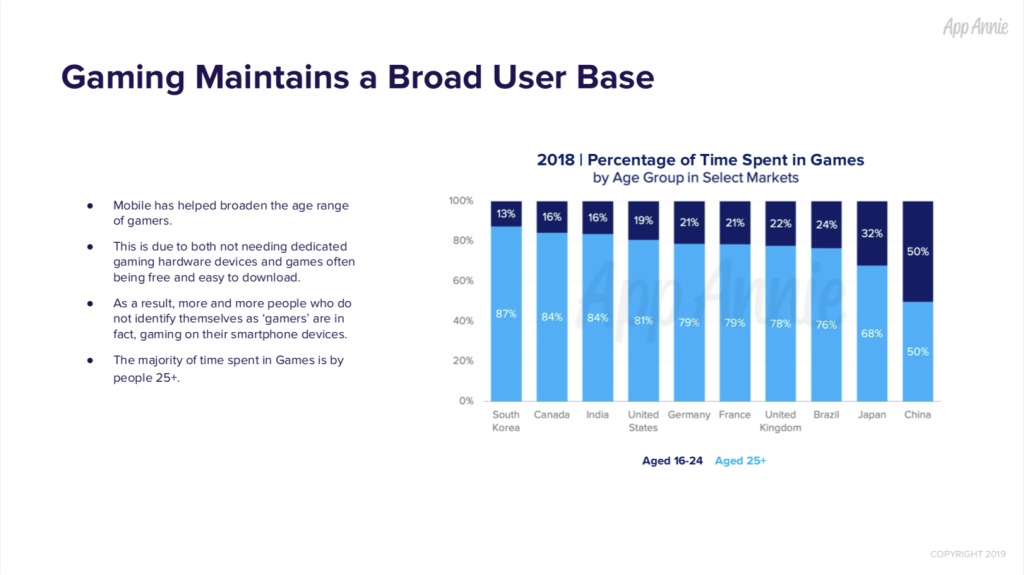 Games account for 10% of the time spent in apps. I thought this would be more, but then I thought about my own use of email, work communication apps like Slack, and media apps such as Reddit, Twitter, and The Athletic, and it made sense. Many of us spend a few minutes flingin’ cards or matching gems on our phone each day, but I’ll spend an hour or more reading sports articles on The Athletic. For others, mobile is their primary viewing platform for TV and videos.

And don’t get me started on checking work email. …

Other interesting engagement stats include:

As I look at my aging iPhone, I see I have 14 games on my phone. Now, I cover the game industry, so this is no surprise. App Annie finds most people play two-to-five games a month. The mobile games in my regular rotation are Hearthstone, Talisman, The Elder Scrolls: Blades and Warriors of Waterdeep, and a Pinochle app (two of these are paid apps), so I fit that profile. 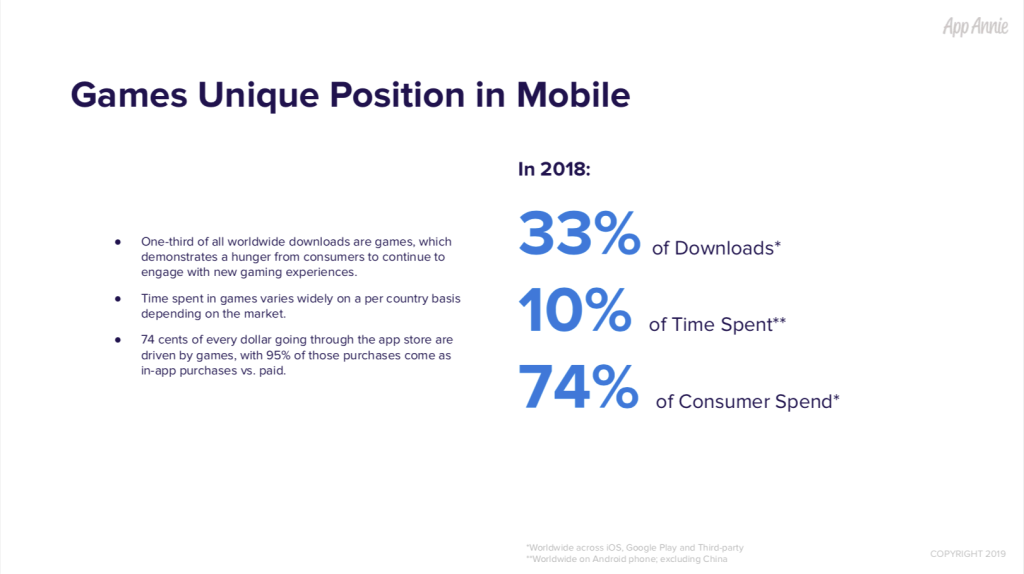 “Discovery” — people being able to find your games — is one of the biggest problems in the mobile sector (and it’s bad on the PC side of things, too, with Steam being swamped with new game releases as well). App Annie found that in 2018 alone, more than 2.7 million games — a staggering number! — appeared on Apple’s and Google’s app stores. Continuing established trends, Android is where games find a broader reach, and iOS brings in bigger bucks.

Here how the firm breaks it down:

App Annie is also finding that gamers have a need for speed, spending 7.9 times more in racing games (not battle royale) than another other genre on the market, even as people are opening their wallets more for all types of games.

Mobile spending is also 1.2 times what PC, console, and handheld output is combined. Again, this is no surprise — mobile has a bigger reach, and while folks can spend $60 on console games, some whales spend more than that in mobile games … on a regular basis. And free-to-play’s reach on mobile expands its earning power. 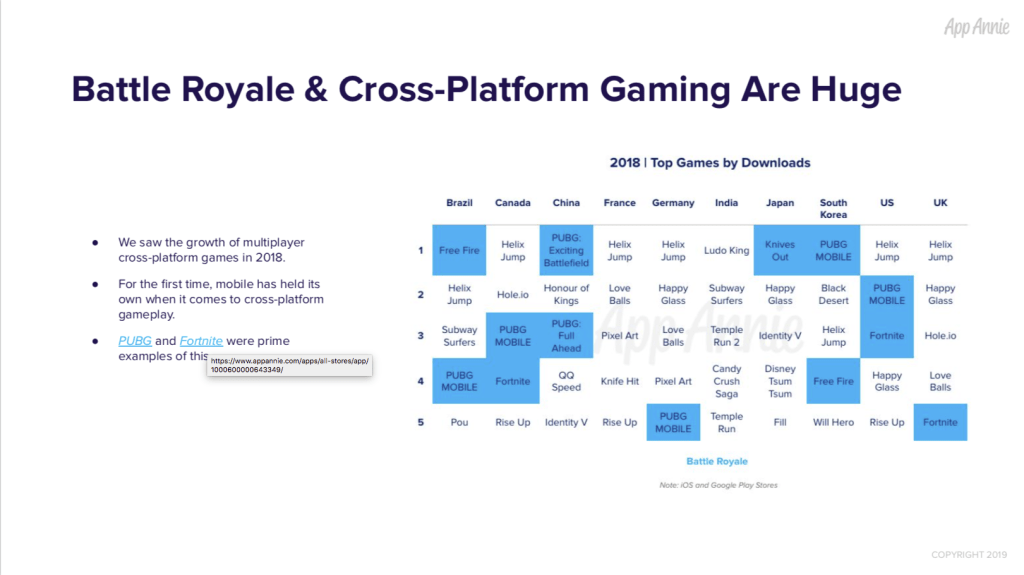 The biggest speed bump in mobile path in 2018 was China due to its issues with game licensing. It established new rules in 2019, and that should help the market. But this situation has had one positive effect — more Chinese publishers and studios are looking to expand outside their home territory.

You can check out App Annie’s full report for more details.