Supermarket Shriek is a ridiculously amusing two-player co-op game where you maneuver a shopping cart through treacherous supermarket tracks by using your voice.

I’m pretty sure you won’t see any other game like it at the Electronic Entertainment Expo (E3), the big game trade show in Los Angeles this week. I saw the title at a preview event and had a chance to play it. On paper, I’m sure that no one would ever greenlight this game. But it’s actually a hoot to play.

I played the party game with a game controller. But you can play it with a couple of microphones. It can get very loud. You have to scream loud into the microphone to make the shopping cart turn in one direction. The other player has to scream at the same time that you do in order to make the shopping car drive straight. If you stop shrieking, the cart will turn in the other direction if the other player keeps shrieking. 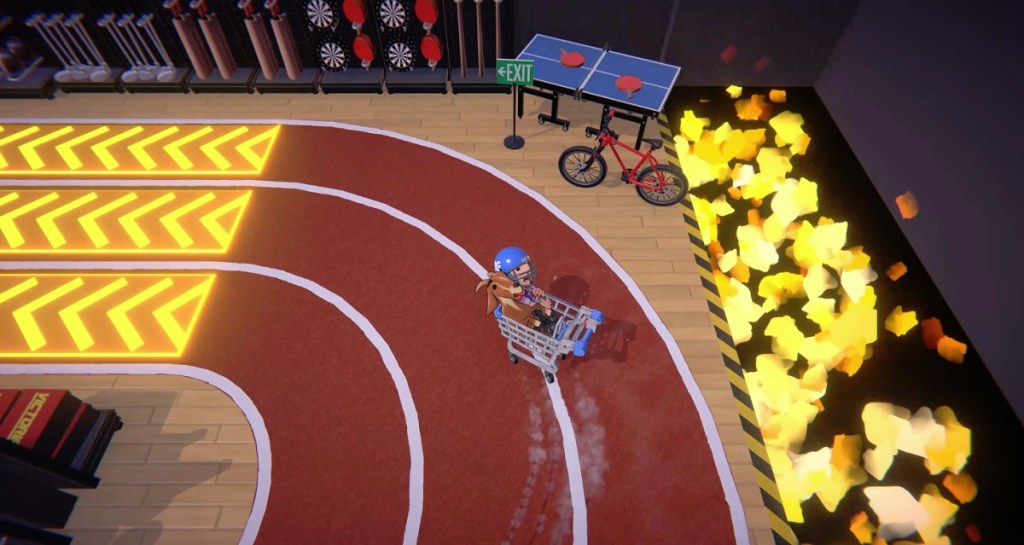 Above: I managed to shriek my way through with a goat in my cart in Supermarket Shriek.

With this style, you can maneuver the shopping cart through the crooked and crowded aisle of the supermarkets. If you can race through quickly, you get up to three stars and have a chance to beat others on the leaderboard.

Belfast, Ireland-based Billy Goat Entertainment is making the game. It started a couple of years ago as a game jam idea that Will Barr and one of his friends, Paul Kelly. They were big fans of the game show Supermarket Sweep, and they happened to be watching some funny videos about shrieking sheep. So they got working on the title.

The game has 32 levels, starting at the rough end of town. The buildings are falling apart. You gradually unlock more shops. By the end of the game, you’re walking among ice sculptures in the streets and glamorous luxury stores. Barr said in an interview with GamesBeat that there aren’t many game studios in Belfast. Barr himself was a TV show animator. But he made a lot of mods for titles like Ghost Recon and Rainbow Six and eventually taught himself how to make a game.

Now the company has five people. The team is self-publishing the title on Steam and the Xbox One before the end of the summer.