Microsoft took the wraps off its Project xCloud cloud gaming service this week without a lot of fanfare. At the company’s Electronic Entertainment Expo (E3) gaming event Sunday in Los Angeles, the company devoted a couple of minutes to the cloud within a 90-minute broadcast on the future of gaming.

But Kevin LaChapelle was excited to show off the technology after the event in the Microsoft Theater. The general manager of Project xCloud at Microsoft showed cloud gaming working at 1080p resolution and 60 frames per second on mobile devices such as Android smartphones and tablets.

LaChapelle said Microsoft will test the technology in the coming months as part of a beta program for consumers. And if it goes well, then xCloud will be the primary way that Microsoft will fend off the competitive threat from Google’s Stadia cloud gaming service. I talked with LaChapelle about cloud gaming. 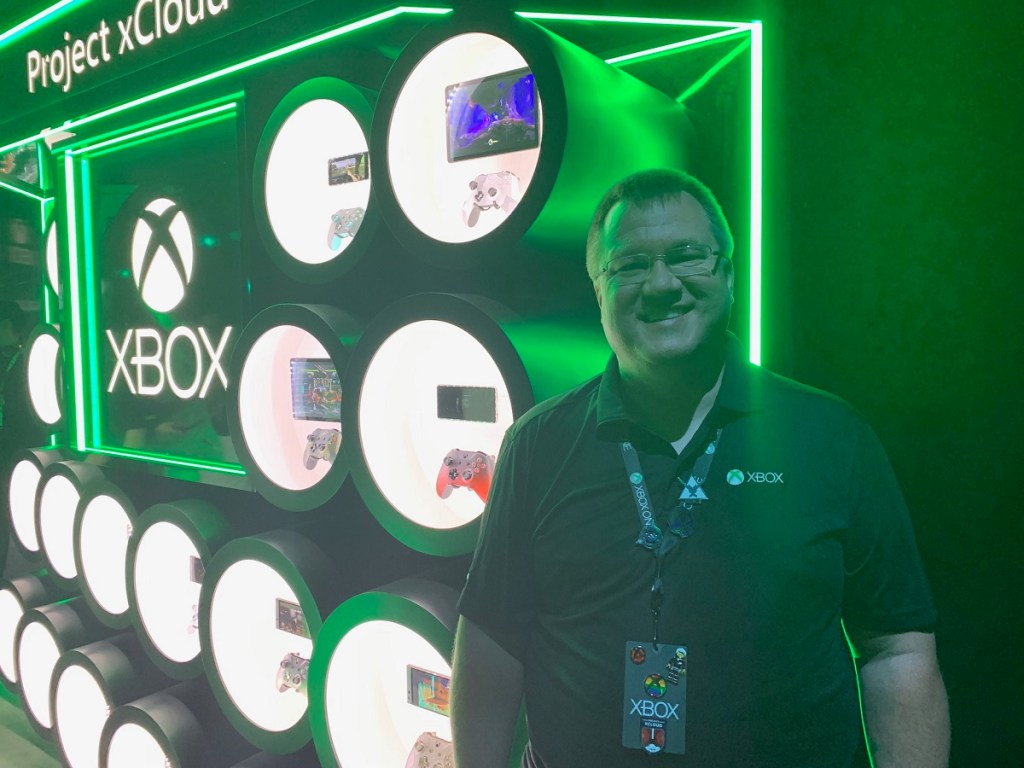 Above: Kevin LaChapelle is general manager of Project xCloud.

GamesBeat: How long has this been in the works?

Kevin LaChapelle: We’ve been working on xCloud for quite a while now, a couple of years.

GamesBeat: Which devices is xCloud working on here at E3?

LaChapelle: Those are Android smartphones. The ones on the table are Samsung S10s. Right now we’re focused on Android, but this is one of those things where we’re working on it over time, and we’ll be adding–the vision is basically any device, any screen that has an internet connection is where we’re aiming.

GamesBeat: How is it working? Is it just a Bluetooth connection?

LaChapelle: Right now what we have is, the games are physically running on our Xbox server hardware in a data center about 400 miles from here. The video is being streamed to the phone. Because we’re on the show floor the controllers are hardwired to the phone, but I always play via Bluetooth. 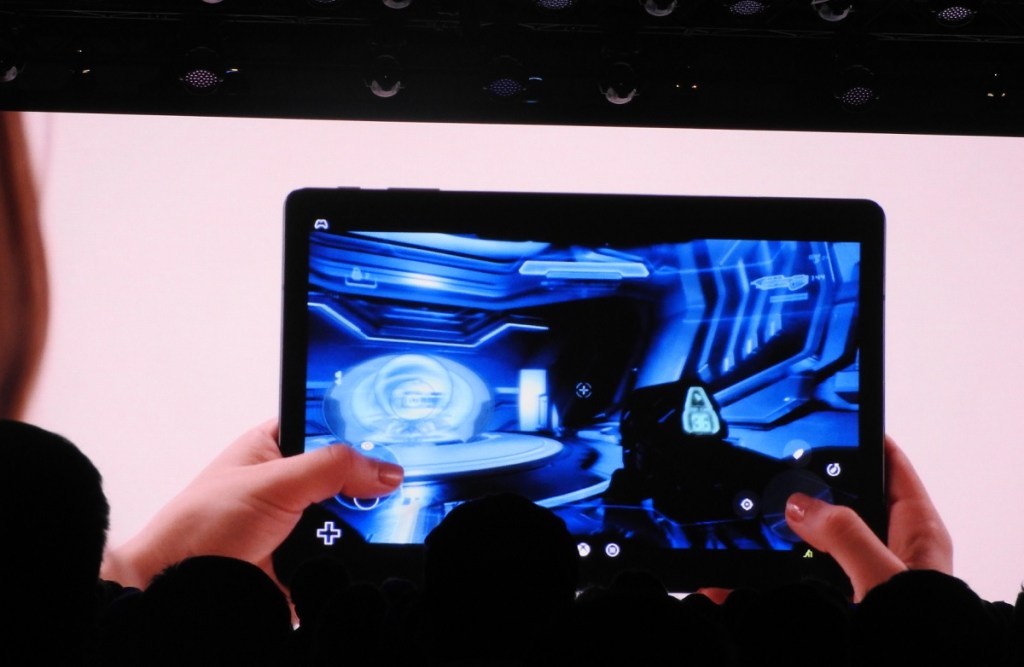 Above: Project xCloud is a cloud-based gaming service that runs on mobile devices like tablets.

GamesBeat: What kind of speeds are you running at?

LaChapelle: We’re running roughly 10 megabits. The video stream generally is around 7.5 megabits, and then we have a small uplink channel for processing input.

GamesBeat: What is the phone connecting to?

LaChapelle: Right here it’s to the internet connection the show provides. But if you’re on a phone and you’re not in a show setting, the bit weights are such that we can play on LTE, 4G, Wi-Fi, wired–as long as you can get roughly 10 megabits, you’re fine.

GamesBeat: Some people were worried that this would consume more of your data, for people on data plans.

Above: Xbox Live is coming to iOS and Android.

GamesBeat: Is there a ping time that you could say is the average, the speed of interaction?

LaChapelle: Latency is an interesting thing. There’s latency in every component, even if you’re sitting on your couch playing on your console. You misconfigure your TV and you have 80 to 200 milliseconds that you add right there. The way I always talk about it is, the speed of light is the speed of light. Where we’re playing here, the ping to our data center is less than three milliseconds.

GamesBeat: Are you going to go beyond mobile devices?

LaChapelle: Yeah, yeah. This is a multi-year journey we’re on. It’s about getting the service right, and then frankly once we’ve got that all dialed in, each additional device or endpoint is not much. It’s really easy to do.

GamesBeat: Is there a way that some things seem obviously different compared to what Stadia is doing right now?

LaChapelle: I’m not going to talk about the competition. For us, what we like is that we offer the consumers choice. If you want to game on a console, game on a console. If you want to game on your mobile device, you can do that as well. We announced here that in October, if you’re an Xbox customer and you already have a console, we’ll enable you to stream from that out of your home to your mobile phone for free. We’ll also be piloting Project xCloud. You can try that as well if you’d like.

For us, because we’re Xbox-based, we’ve been in the gaming business for almost 20 or 30 years, depending on whether you talk about Microsoft or Xbox. Because this is an Xbox in the data center, you have access to all these games. If it runs on Xbox it runs on xCloud.

GamesBeat: Will this be worldwide in the fall?

LaChapelle: We haven’t announced the regions we’re launching in, but our aspirations are to scale this out to a global service. It’s really about nailing the customer experience and getting that perfect. We’ll grow as we have everything dialed in for each market, because each market is different, especially when you think about cellular networks. 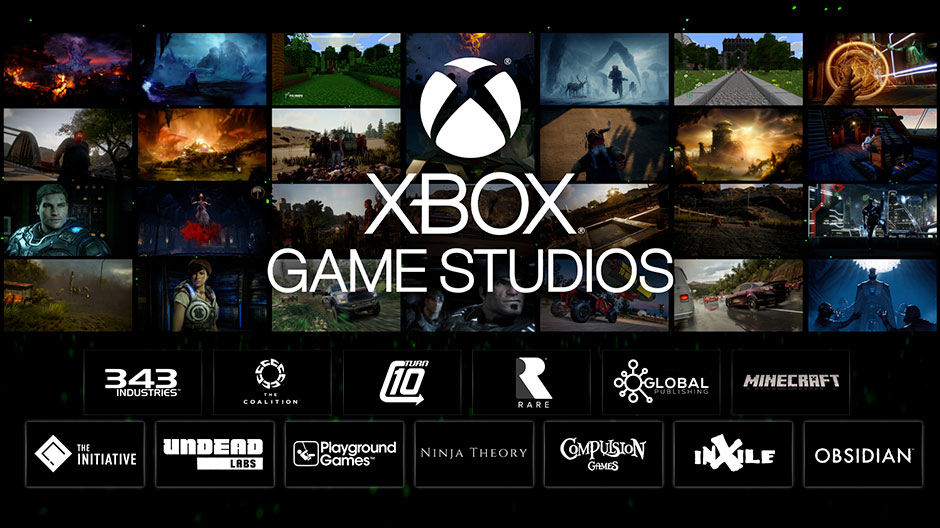 Above: Xbox Game Studios is the new name for Microsoft Studios.

GamesBeat: Are there going to be tiers of quality — HD and 60 frames per second, HDR 4K, that kind of thing?

LaChapelle: Right now we’re not talking about specifics on that. What you see here is we’re streaming up to 1080p, 60 frames per second. You can think about it–over time, we’ll continue to evolve the service. But as far as what the business models are like around that, that’s something that we’re not ready to talk about yet.

GamesBeat: When you’re streaming from home to mobile, is that something like Steam Link?

LaChapelle: We’re sharing the technology we’ve been building for xCloud. We’re just going to release that on the console. Fundamentally, the experience you have here — as long as your home network is good enough, because you need an uplink speed, you’ll experience something similar to that.

GamesBeat: Where is the beta at right now? People can play it here, but —

LaChapelle: We can play it here. We have what we call our internal take-home at Microsoft. Microsoft employees, everyone in the gaming organization, have access to play this. We’re expanding that out to more employees. Then, in October, we’ll invite members of the public to play.

Above: Gameloft is bringing Xbox Live to games like Asphalt 9: Legends.

GamesBeat: A lot of this is about making gaming more accessible, then?

LaChapelle: Exactly. When you think about the transformation that music and video went through, where you stopped thinking about how you consumed — you just did it. You want to watch a movie, you have a number of ways to do that. This is the same thing for gaming. If I want to play on my console, I can. If I want to play on my phone while I’m on the go, I can. It’s about making it easy for you to play games wherever might happen to be.

GamesBeat: Is this viewed as perhaps the low-end SKU in a way? There’s going to be a console next year that’s on the high end, competing with the PlayStation 5. Where does this fit in a spectrum of products?

LaChapelle: I hesitate to talk about SKUs. What it is, we have a capability that we’re offering. We’ll be sharing it with people. That offering will continue to evolve as the whole gaming ecosystem evolves. What business models are tied to that, those are things we’ll have to share later.

GamesBeat: At home, do you need something like a Chromecast-like device for your TV? Any kind of wireless networking for the controller?

LaChapelle: Right now we’re focused on mobile devices. But when you think about–when I travel I take my phone, and I have one of those sticks that has an HDMI port on it. I plug it into the TV and I play that way. It’s really up to you, how you want to experience it. You could think of, in the multi-year journey — when you enable a smart TV, whether it’s built in or it’s a stick of some form, those are all possibilities that could come in the future. But right now we’re on mobile.

GamesBeat: Is there cross-progression?

LaChapelle: Yes, this is exactly an Xbox. You’re playing on Xbox. Your saved games, party chat, achievements, everything is all the same. Just think of it like we put the console in the cloud for you. You don’t have to worry about that.

GamesBeat: Looking at mobile, do you think there’s any point in 4K on such a small screen?

LaChapelle: There are physical limits to what the eye can perceive. The smaller the screen, as you’ve seen when you play — what we’re showing there is perfectly fine. As you scale up to a big-screen TV you’ll want higher resolutions. But this is perfect.