There was a huge decrease in gaming industry TV ad spend from April to May, down to an estimated $9.3 million from the previous $29.4 million. Nintendo led with 45.6% of spend, while previous chart-topper PlayStation had 26.8%. In total, nine brands aired 27 spots over 2,700 times, generating 655.9 million TV ad impressions. 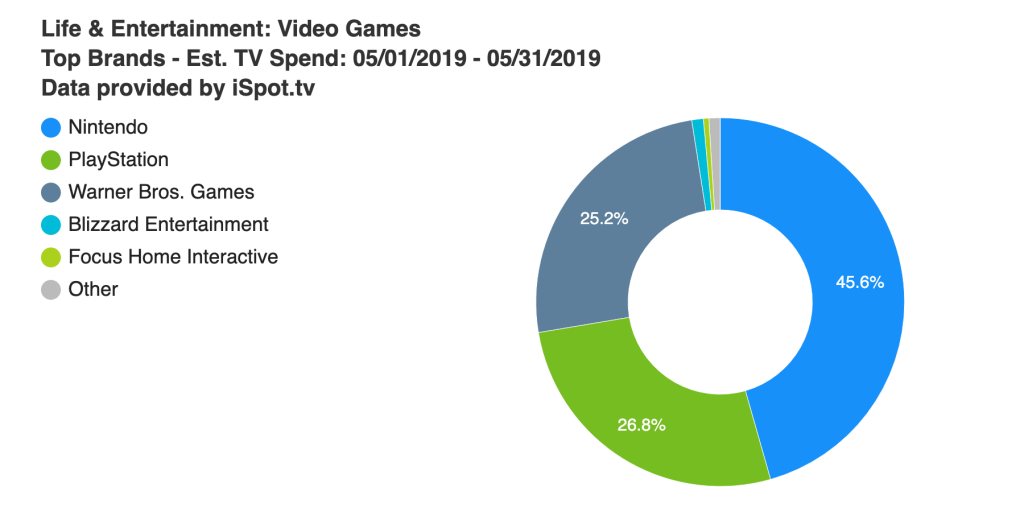 GamesBeat has partnered with iSpot.tv, the TV ad measurement and attribution company, to bring you a monthly report on how gaming brands are spending. The results below are for the top five gaming-industry brands in May, ranked by estimated national TV ad spend.

Nintendo’s estimated spend of $4.2 million puts it squarely in first place for the month. It aired 13 commercials over 1,500 times, which resulted in 230.3 million impressions. “My Way: Pokémon: Let’s Go, Eevee” was the ad with the most spend, an estimated $1 million. Nick, Cartoon Network, and Adult Swim were three of the networks with the highest spend, while programs that Nintendo prioritized included SpongeBob SquarePants, The Loud House, and Bob’s Burgers.

At No. 2: PlayStation, which only spent at the very beginning and very end of May. Its total estimated budget was $2.5 million for three spots that aired 378 times, generating 149.2 million impressions. “This World Comes for You” had the bulk of the spend, about $2.1 million. The company focused on reaching sports-loving fans through programming such as the 2019 NBA Finals and playoffs and SportsCenter. Top networks included ESPN, ABC, and Fox.

Warner Bros. Games takes third place with an estimated spend of $2.3 million on three ads that ran 759 times, resulting in 257.9 million impressions. The company continued to push “Mortal Kombat 11: Old Skool vs. New Skool,” which had a budget of about $1 million. The NBA, the NHL, and South Park were three of the top programs, while TNT, ESPN, and Comedy Central were three networks that had high spend.

Finally, in fifth place: Focus Home Interactive, with an estimated spend of $44,882 on a single ad, “Take Them Down,” which aired 36 times. The bulk of the spend was on Comedy Central, followed by MTV2 and Adult Swim. Programs that attracted the most spend included The Daily Show With Trevor Noah, Tosh.0, and Bob’s Burgers.