The Mona Lisa is unquestionably Leonardo da Vinci’s most recognizable painting, but if you’ve ever tried to see it in person at the Musée du Louvre in Paris, you know that between the throngs of people snapping photos and the glass cage that protects it from vandals, you’re not going to get too close. So the Louvre has teamed up with HTC Vive Arts to create Mona Lisa: Beyond the Glass, an up-close experience using virtual reality to bring you right next to the canvas, enabling you to examine its oily pores like never before.

Beyond the Glass will be the Louvre’s first VR experience, and there’s plenty to cover, given how much interest the Mona Lisa has continued to generate while on permanent exhibit at the museum. Part of the app will enable you to interact with the painting as it floats within a virtual space, revealing details that would not normally be visible to the naked eye. Another section will provide all sorts of background for both the piece of art and its mysterious subject.

That said, only part of the Beyond the Glass app will be available at the Louvre when it debuts on October 24, 2019 as part of a Da Vinci retrospective, celebrating the visionary designer and artist on the 500th anniversary of his death. Moreover, to keep lines for the Vive-powered app from themselves becoming too long, reservations will be required to access the area in Hall Napoléon, under the museum’s famous glass pyramid, with ticket requests beginning tomorrow, June 18 through the Louvre website. The exhibit will run through February 24, 2020. 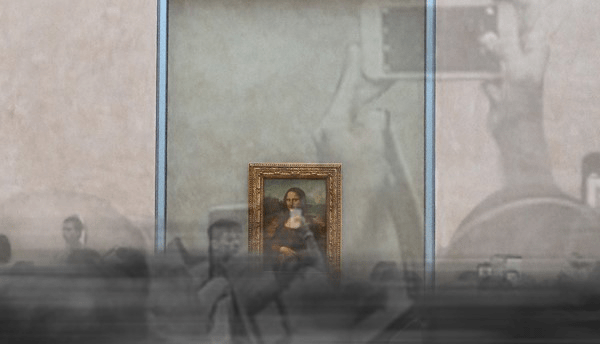 Above: This is what the actual Mona Lisa viewing area at the Louvre looks like on a busy day.

If you want the full experience, an “extended version” of the app will become available on HTC’s VR subscription service Viveport for at-home viewing, and then will come to other platforms. HTC says that the downloadable app will transport users to the Louvre, “entering the museum through its famous Pyramid before traveling through the Grand Gallery” and will include additional works by the artist.

The Louvre is the world’s most-frequented art museum, with over 10 million visitors in 2018, but it wasn’t long ago that it announced huge budget deficits that a greater embrace of AR and VR could address. Mona Lisa is already seen in person by over 20,000 people each day, in addition to viewings in books, reproductions, online, and elsewhere. Beyond the Glass is likely to make the already-famous painting even more iconic as it demonstrates the power of VR to transport users to a distance place and provide better-than-reality looks at the objects inside.