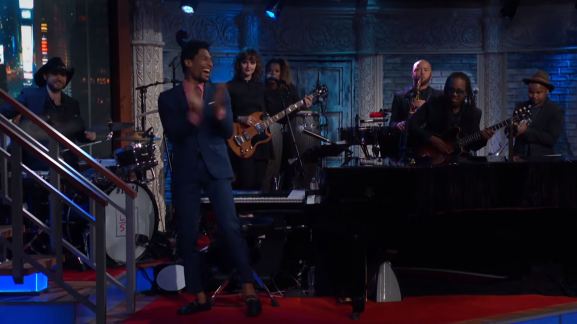 I love two things in this world: covers of video game music, and a network television show that validates my tastes. That’s why it’s wonderful that Jon Batiste exists. Batiste is the band leader on The Late Show with Stephen Colbert, and last night his band, Stay Human, covered the “Lost Woods Theme” from The Legend of Zelda series.

The “Lost Woods Theme” is from The Legend of Zelda: Ocarina of Time. Long-time in-house Nintendo composer Koji Kondo wrote the jaunty tune. And like most of Kondo’s music, it is the kind of track you can hear on repeat because it has to fit onto the tiny memory of a cartridge but somehow that repetition only makes it better. Kondo also used the limited note range of the Ocarina for this song. But again, he turns that limitation into an asset, and Batiste’s new arrangement plays on that.

As for why Batiste covered a video game song on CBS’s big late-night talk show — well, it’s something of a signature move for him. He’s a hypertalented musician who has played with some of the biggest acts in the world. You can hear his piano on recordings with Prince, Willie Nelson, and Stevie Wonder. But Batiste’s tastes come from growing up with video games.

In an interview with Rolling Stone, Batiste said that he learned to play piano by taking lessons but also by transcribing the music he heard in his favorite games. He especially loved the tunes from Street Fighter Alpha, Final Fantasy, and Sonic the Hedgehog.

Batiste has even released a single for his Green Hill Zone cover, which is just astounding.

Now, if you’ll excuse me, I’m going to listen to this on repeat for the rest of the day.