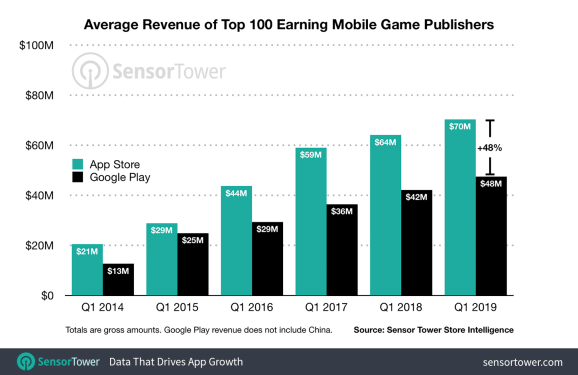 Mobile market analyst Sensor Tower looked at the 100 top app publishers on Apple and Google and found that those on the iOS side made 64% percent more compared to Android during the first quarter of 2019.

Both of those numbers are up from the previous quarter, where the top 100 iOS game developers made $64 million and the Android ones made $42 million. As you can see in the chart above, both have been growing steadily over the past few years.

The gap between the two is smaller when just talking about games, with iOS outperforming Android by 48%. When only looking at non-gaming app revenues, that gap balloons to a 232% difference in favor of the app store.

“An average of $114.5 million was spent between the combined top games publishers on both stores last quarter, nearly four times more than the $29 million average revenue of the top non-gaming publishers,” Sensor Tower notes in its report.