The number of Connected Play companies has grown 150% in the past year to 262 companies, according to an industry landscape document that Collabsco created.

Collabsco is a strategy and innovation firm based in Austin, Texas, and it has been tracking Connected Play, or products that allow people to interact, play, or learn in the physical and digital world. Valerie Vacante, founder of Collabsco, said in an email to GamesBeat that Connected Play is more than toys that are connected via Bluetooth. She created the landscape at the top of this story.

Rather, they include products in categories such as the internet of things (IoT), artificial intelligence (AI), robots, augmented reality (AR), virtual reality (VR), wearables, near field communication (NFC), radio frequency identification (RFID), voice assistants, and data over sound as well as additional areas centered around how various technologies are implemented: EdTech, Makers, Social, Location Based Entertainment (LBE), and “Let’s Play,” a video documenting the playthrough experience, usually of a video game. 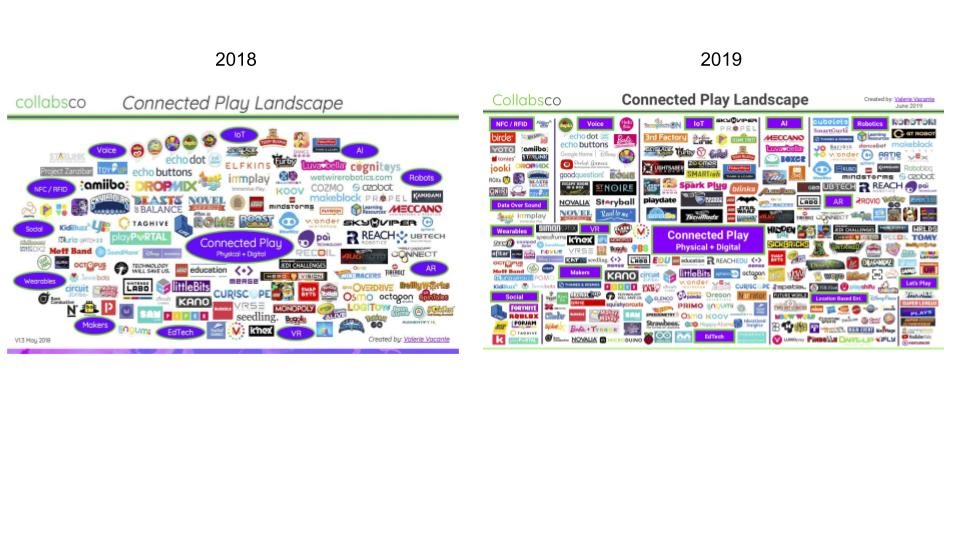 Above: The change in Connected Play

“Our goal is to educate, collaborate, and inspire the industry and future leaders by uncovering emerging technologies, real-world consumer insights, business growth opportunities and collaborative partnerships to create experiences that ignite imagination, create a sense of wonderment and shape the future of play,” said Vacante, managing partner of Collabsco. “The connected play landscape was designed to provide a single, consolidated view of the companies and collaborators breaking barriers through the emerging technologies and the power of play. 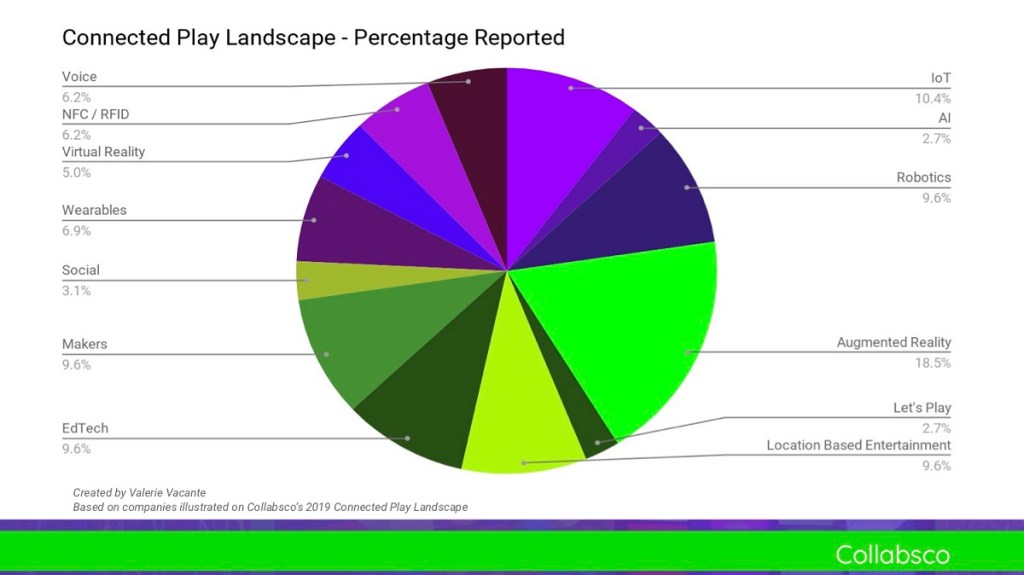 Above: Connected Play companies by category

Connected Play is big business: Smart Toy revenue is estimated to grow by almost 200% to $18 Billion by 2023 (Juniper Research). Robotics are rising: Consumer robotics will reach almost $23 billion per annum by 2022, up from an estimated $6.4 billion in 2018 (Juniper Research).

Voice assistants are getting vocal: There will be 8 billion digital voice assistants in use by 2023, up from an estimated 2.5 billion at the end of 2018 – that’s 1000% growth (Juniper Research)

NFC is even nearer: The NFC market is estimated to grow 17.9 percent over the next decade, reaching nearly $50 billion by 2025 (Research and Markets).

Power up play: Juniper forecasts that unique viewers of eSports (competitive playing of video games) and Let’s Play content (tutorials and talk-throughs of game content) will reach 858 million by 2022, up from 630 million in 2018.

Get out and get immersive: By 2023, LBE (Location Based Entertainment) will also make up about 11% of the VR industry and this is one of the reasons behind its recent success: while VR was launched to huge fanfare nearly two years ago, headsets are still expensive and content scarce, so the in-home VR market has remained relatively small (Licensing Source). 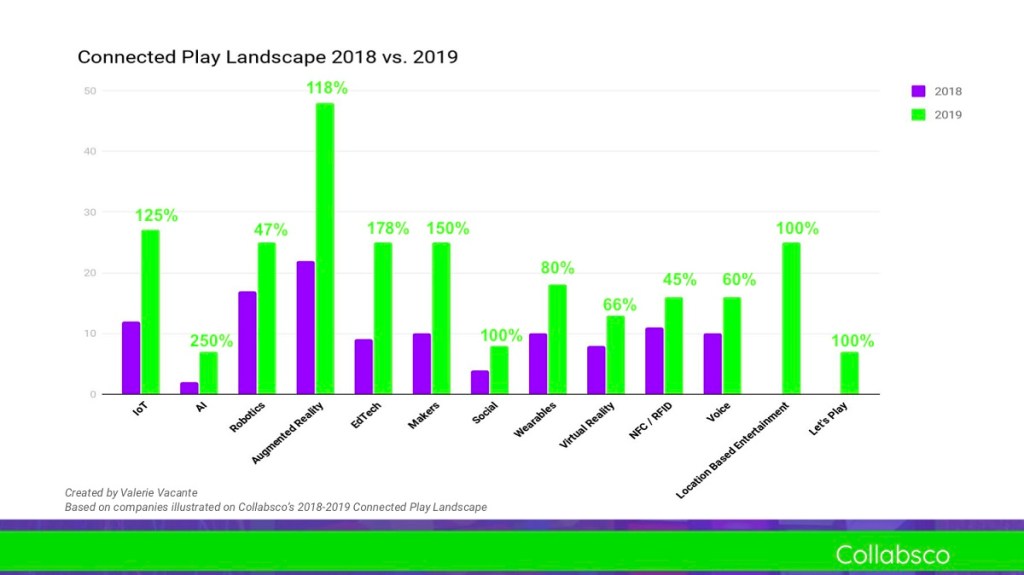 “At Hasbro, we’re committed to reinventing invention. As we look into the future, we’re interested in new ideas from new voices; Collabsco’s Connected Play Landscape provides us with an expansive view of the industry and potential collaborators to evolve our portfolio and bring the world’s best play experiences to life,” said Rich Mazel, senior director of global product acquisition at Hasbro, in a statement.

Vacante said that Connected Play goes beyond toys or a single technology. The company scours the globe looking for these companies.

She said there are collaborations across the industry including Hasbro and Kilburn Live, Mattel in partnership with iP2Entertainment, Disney recently opened Star Wars: Galaxy’s Edge described by Disney as “a new land coming to Walt Disney World Resort and the Disneyland Resort, where you can live out your own Star Wars story, fly the Millennium Falcon and explore a remote outpost where adventure awaits.”

And Vacante noted that arcades and independent fun centers such as Pinballz are meshing retrogaming with new tech such as VR Arcades, XR immersive experiences with both laser tag and laser mazes, Dart’em Up, an independent indoor NERF battleground while Urban Air Adventure Park meshes VR gaming, arcades, trampolines, zip lines and more.

She also noted that Two Bit Circus experiments with immersive experiences from Storyrooms, an enhanced take on escape rooms, Virtual Battle zones and Beta nights to unveil, test and learn new experiences. Game XP is the world’s first game park, the largest gaming, and innovation event in Latin Amerca packed with physical and digital experiences bringing your favorite video games to life, this year a full-on Fortnite experience will be included along with the world’s largest E-sports screen and tournaments and innovation arena packed with speakers and stories behind the games, global innovators, business innovation, gadgets of the future and more.