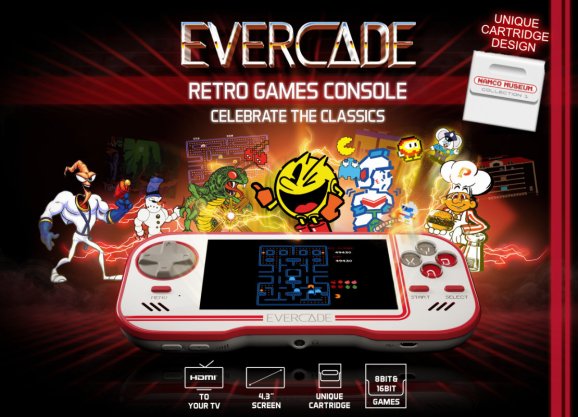 Evercade is a new portable gaming machine partnering with publishers of classic games Namco, Atari, Interplay, and Data East to make it easier to play retro hits like Bad Dudes, Earthworm Jim, and Yars’ Revenge on the go.

The handheld is coming out during Q4 2019. A base version will come with one cartridge (Evercade has not specified which it will be) and cost $80. A premium edition will come with three cartridges and cost $100. Other companies have made portables designed for playing old games, but these are often cheap and depend on built-in or downloaded game ROMs. Evercade’s use of officially licensed cartridges makes it stand out.

Confirmed cartridges so far include collections of classic games. Interplay Collection 1, for example, will include BattleChess, Boogerman, Clayfighter, Earthworm Jim, Incantation, and Titan. Evercade is promising that over 100 titles will be available through these collections at launch. Evercade is also talking with indie publishers to bring newer retro-inspired games to the platform.

The machine is a portable, but it can also connect to a TV via HDMI. The screen on the handheld will be roughly the same size as the one on the PSP.

Retro gaming is becoming a bigger, if still niche, business. Companies like Nintendo and Sega have capitalized by creating mini-consoles with built-in games. Evercade is using a different approach. Since it supports cartridges, it could have support from new games well past its launch. The NES Classic Edition, meanwhile, has 30 built-in games, and that’s all it will ever have.