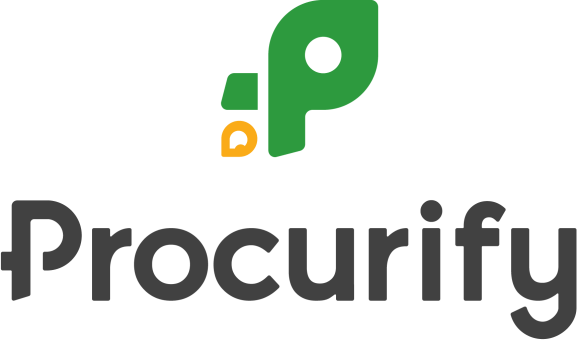 The vote of venture confidence comes after Procurify shored up its C-Suite with the hiring of Eric Bin, previously director of product at Clio, and former Hootsuite CTO Simon Stanlake. Bin and Stanlake stepped into the roles of VP of product and SVP of engineering, respectively.

“The way organizations are managing their spend has evolved and changed throughout the years, and the landscape of business tools need to keep up with that evolution,” said cofounder and CEO Aman Mann. “We are so grateful to embrace the next stage of Procurify, and to have some of the top investors and leaders in U.S & Canada believe and support our mission of reinventing the way organizations spend, to transform the Spend Cultures of businesses around the world for the better.” 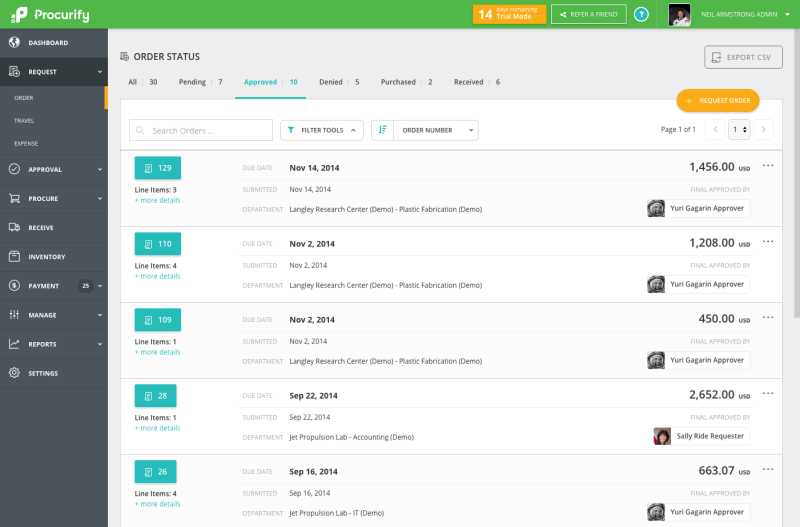 Procurify joined Vancouver-based tech accelerator GrowLab’s boot camp in 2012, a few months after Mann and fellow BCIT School of Business alumni Eugene Dong and Kenneth Loi drafted the business plan for a class project. In 2012, the company graduated from GrowLab and went on to raise $4.2 million in seed capital and close a $7 million series A, and to expand the core team from five people to over 90.

That’s the tip of the proverbial iceberg. Procurify’s purchasing workflows enable managers to address item requests and purchasing and receiving, and to match invoices to orders for payments as they come due. Meanwhile, the spend-tracking graphing tool plots actual spending against committed spending, and the expenses management feature consolidates and controls purchases made with credit cards in part to facilitate team expense claim requests.

From within Procurify’s cloud dashboard and mobile app, admins can limit the visibility of budgets and set approval thresholds on a per-project and per-person basis, and they can manage and pay vendors and track those vendors’ performance to see if items were received when and in the condition promised. On desktop, they’re able to review user roles and design roles with permissions suited to particular departmental needs. And from the aforementioned app, managers can request, approve, or send actions, as well as capture receipts on the go by snapping and saving pictures of them. 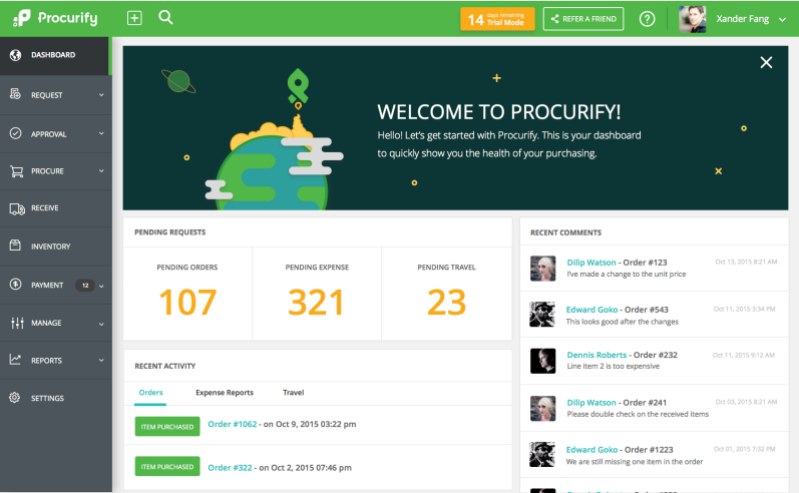 Procurify is far from the only digital-first, cross-platform procurement suite on the block — German startup Scoutbee just last week raised $12 million for its company-to-supplier solution — but it’s clearly doing something right. Its current customers hail from 71 countries and manage over $7.1 billion in combined spending through Procurify, and include heavy hitters like Asana, Goodwill, Samumed, the University of Maryland, Goop, GardaWorld, Planet Fitness, BlackThorn Therapeutics, Premier Biotech, Icagen, and A3 by Airbus.

“There is this massive void within the mid-market for easy-to-use solutions that serve growing organizations when it comes to tracking company spending and purchasing,” said Information Venture Partners general partner and cofounder Robert Antoniades. “Procurify has an immense market opportunity to create a new category around Spend Culture for small to mid-size companies.”