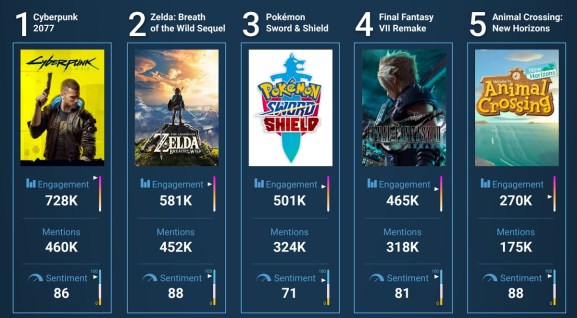 Measurement firm Spiketrap scoured the internet and found that Cypberpunk 2077 was the overwhelming favorite among fans during the Electronic Entertainment Expo (E3), the big game trade show in Los Angeles.

Based on both engagement and mentions, Cyberpunk 2077 came out on top in no small part due to the surprise appearance of actor Keanu Reeves during the Microsoft Xbox E3 event. But the actor’s presence alone wasn’t the reason for the popularity, Spiketrap said.

Nintendo came in second with its mention of the Legend of Zelda: Breath of the Wild sequel, followed by Pokemon Sword & Shield, Final Fantasy VII Remake, and Animal Crossing: New Horizons.

Although show attendance was down at 66,000 compared to 69,000 a year ago, the number of tweets was up 18% at 3.6 million. E3 also generated a million videos and comments, up 1%, and 603,000 Twitch livestream viewers, down 20%. The Twitch viewership was affected by Sony’s absence from the show, Spiketrap said.

With the exception of Xbox, all of the event livestreams saw a drop in Twitch viewership from a year ago. Xbox had the highest viewership on Twitch, while Nintendo had the highest sentiment rating. Cloud gaming and cloud streaming saw rather low engagement during E3, but Microsoft’s lack of details on Project xCloud may explain that.