I love Metroidvanias, and indie developers have taken to the genre to create worthy games like Hollow Knight, Guacamelee, and Axiom Verge. Metroidvanias have two primary influences: Metroid and Castlevania (speficically the nonlinear, role-playing game-infused installments in the series that started with Symphony of the Night).

Many of the indie Metroidvanias lean on the Metroid side, but Timespinner is as close to an indie version of Symphony of the Night that I’ve played.

Timespinner is available on PlayStation 4, Xbox One, Switch, Vita (no kidding), and PC. It is the first game from indie studio Lunar Ray Games, which crowdfunded the project on Kickstarter back in 2014.

Like with Symphony of the Night, you explore a nonlinear world as you search for new areas to discover while fighting monsters, gaining experience points so you can level your character up to become stronger, and finding new equipment. Even many of Symphony of the Night’s smaller mechanics make an appearance in Timespinner, including the back-dash ability bound to the left shoulder button. 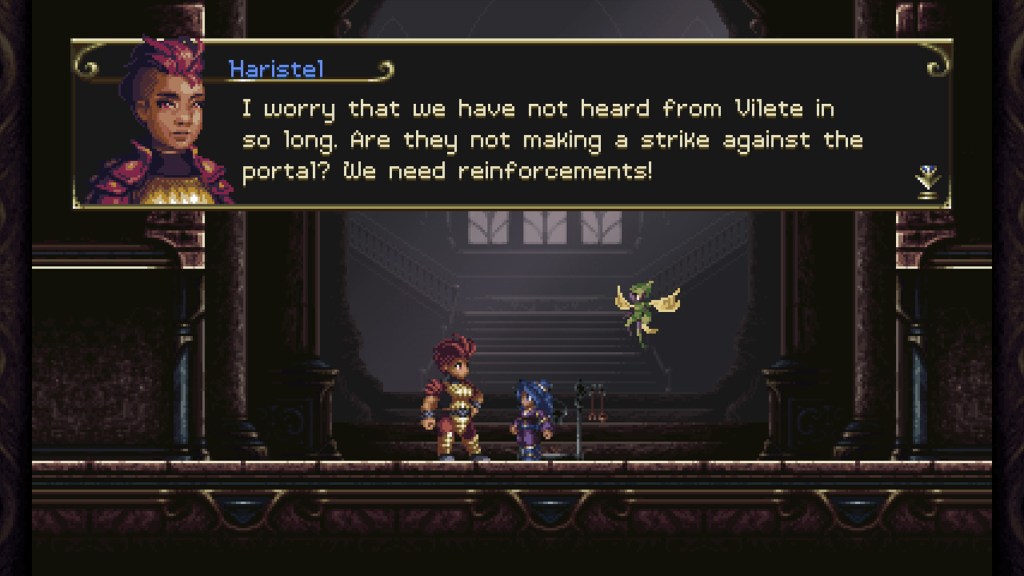 Above: Taking some time to chat.

Graphically, Timespinner also evokes Symphony of the Night. Like its inspiration, Timespinner has gorgeous, detailed pixel art. Much of my enjoyment came from admiring the various monsters and backgrounds. Timespinner isn’t a pure clone, though. Its aesthetic is brighter and less gothic than what you’d likely see in a Castlevania game.

Timespinner stands apart from Symphony of the Night with its greatest emphasis on story and lore. In Castlevania, you don’t have all that much plot. You’re going to stop Dracula. Timespinner not only has more story, but you can also find a lot of supplemental material hidden throughout the map that flesh’s out the world. You can read these documents at your own leisure to learn more about Timespinner’s characters, factions, and history.

To be honest, all that lore  wasn’t anything I was all that interested in. I like Timespinner because it does such a great job of emulation that Symphony of the Night feel. There’s something extra satisfying about the way attacking enemies with swords and more feels in those Castlevania games, and Timespinner is able to capture it. Even the smaller details of the game’s physics, like the floaty weight of your jumps, call Symphony of the Night to mind.

Timespinner does introduce some new ideas, mostly through time-based mechanics. You have access to two maps. One is a present day version of the world, while the other is set in the past. These two areas are more different than alike, kind of like looking at the Dark World and normal versions of the map in The Legend of Zelda: A Link to the Past. 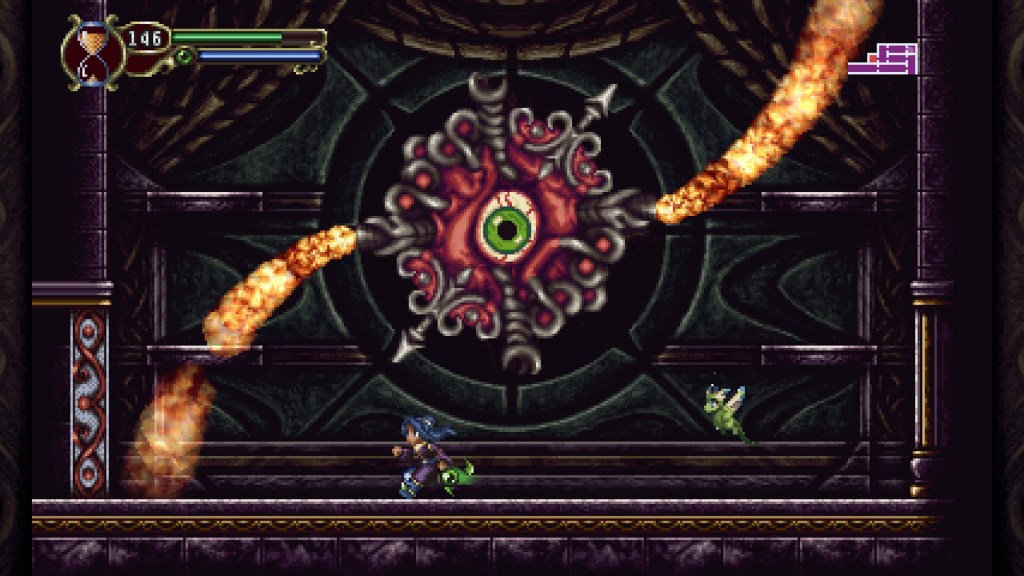 Above: Boss are fun.

Time for a change

You can also press a button to pause the world around you. This is helpful for dodging some of game’s fastest enemy attacks, especially from bosses, but you can also jump on frozen enemies. This can give you access to a lot of hidden areas.

The time stuff is cool, but it’s also underutilized. You don’t need to pause the world all that much outside of when you want to turn an enemy into a platform. And outside of boss fights, you don’t need the help of time magic to dodge enemies.

And while Timespinner carries over a lot of Symphony of the Night’s boons, it also shares its biggest weakness. The game is too easy, especially toward the end. The enemies and bosses can’t keep up with the rate you’re finding powerful equipment and leveling up. The RPG mechanics are cool, but they make you so strong that the tension during the final parts of the experience is lost.

Still, Timespinner is a great experience for anyone who loved Symphony of the Night or similar Castlevania games. I know that Bloodstained: Ritual of the night, a new Metroidvania from the guy who made Symphony of the Night, is out and seems to be enjoying a warm reception so far. But don’t overlook Timespinner, especially if you want a SotN-like experience that also retains the gorgeous, high-detailed pixel art.