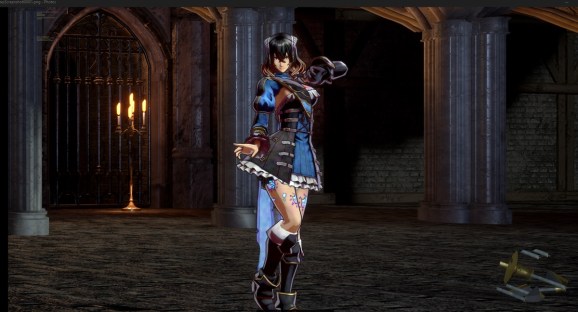 For the purpose of this story, let’s define what I mean by input lag since it can have a couple of different meanings. Input lag means the time between pressing the jump button and when the character onscreen begins her jump animation. I’ve spent the last week playing Bloodstained on PC, and then I restarted it on Switch today. The first thing I noticed was the reduced resolution, but that honestly doesn’t bother me. I’m playing on a 6-inch Switch screen, and 540p is noticeable compared to 720p — but it doesn’t ruin anything.

But the next thing I noticed was the input lag. Bloodstained on Switch has a noticeable delay between button presses and onscreen action. And if I can notice it immediately, it must mean it’s a pretty big difference compared to the PC version.

So I tested it.

I broke out a camera with a high framerate, pointed it at each device, and then started counting frames. The results are not great for Bloodstained on Switch. It’s important to note that I am looking to see when my finger presses the button and when Bloodstained’s hero Miranda starts moving. Because of how difficult it is to get an exact measurement, I’m including a range that I collected across multiple samples.

Bloodstained on Switch has three-to-four times the input lag of the PC version.
PC: 33-to-45ms
Switch: 145-to-158
It's noticeable even when not side-by-side. pic.twitter.com/Ezyc9Wrq6n

The PC version is quite snappy. Thirty-three milliseconds of input lag on a gaming monitor set to gaming mode, is really impressive. That’s well within the acceptable range for an action-adventure game like Bloodstained.

The Switch is much worse. Even if you take the faster side of its range and the slower side for PC, the Switch still has three times the input lag. In reality, it’s probably closer to four or even five times the lag.

This is why you are noticing the latency in the gameplay.

Is the Switch version playable?

Even with the lag, I wouldn’t go so far as to call the Switch version unplayable. You can get 150ms input lag even in competitive first-person shooters. It still stinks, though. And the Switch version is the worst way to play Bloodstained.

I would either get the game somewhere else or hold off on buying the Switch version until developers address the lag. Publisher 505 Games says that the team is working to improve Bloodstained’s performance on Nintendo’s hardware.

Here’s a message from 505 Games community manager Jason Ryan to people who backed Bloodstained on Kickstarter:

“We have been listening to the feedback regarding Switch performance. Our goal is for everyone, regardless of platform, to be able to enjoy the game and have it run smoothly. We want to live up to your, and our, expectations.

Throughout the QA process we have been addressing performance issues in the game. Update 1.01 was published to Switch prior to launch to add content and improve performance. It did not accomplish as much as we had hoped and we need to do more.

To address the concerns brought up by the community we are immediately shifting resources to improve performance and stability for the Switch. You can expect a number of small updates that will improve different areas of the game rather than waiting longer for one big update. We will have more details as we dive into the work.”

Hopefully, the lag is one of those details that the development team prioritizes.