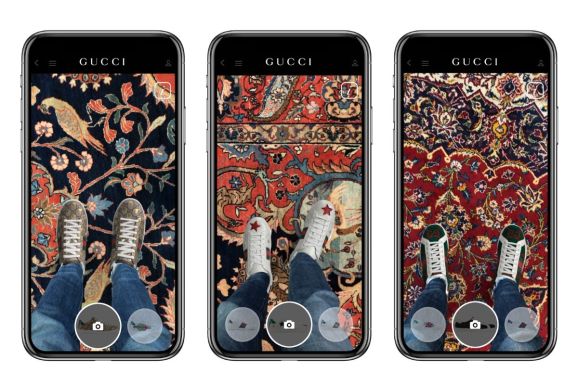 Stopping by outlets and department stores to try on shoes is so passé, if you ask Gucci. The Italian luxury fashion brand today launched a refreshed iOS app that lets customers virtually “try on” its Ace sneakers collection, courtesy of augmented reality (AR).

It’s almost like fitting shoes in person — but not quite. Within the Gucci app, users pick the Ace sneakers of their choice and point their phone’s camera at their feet, after which they’re prompted to try the shoes on virtually. A built-in photo feature lets them capture themselves “wearing” the models that speak to them and share their snaps via text, email, or social media.

Underlying the whole thing is tech supplied by Wannaby, a Belarus-based startup on a mission to build AR commerce experiences. Earlier this year, it launched a beta of its latest app — Wanna Kicks — that similarly lets shoppers try on, fit, size, style, and personalize shoe SKUs from an extensive catalog.

The app is made possible by on-device and real-time machine learning algorithms that suss out the position of the shoes in space while accounting for color, texture, and lighting variations, plus a fully equipped printing studio that Wannaby uses to create 3D sneaker models. The end result is foot-tracking tech that’s robust enough to adapt to different camera angles and follow footsteps as feet move and rotate.

Wannaby won’t stop at shoes — it also plans to tackle other segments, like jewelry and apparel. To this end, it offers Wanna Nails, an app that lets users “try on” nail polish from curated collections with real-time segmentation and recoloring.

“When launching Wanna Kicks we knew shoe AR try-on has great potential in retail, e-commerce and among sneaker fans,” said CEO Sergey Arkhangelskiy. “Just a few months after the technology was released, it found its way straight into the Gucci app. The recent Ace sneakers line has an incredible design, with a variety of distinctive details and textures. We’re happy that our technology allows users to have a closer look at these details and interact with models and the Gucci brand through a new experience.”

Wannaby competes with L’Oréal’s ModiFace, which develops custom AR hair, cosmetics, and jewelry apps for brands like Amazon, Sephora, Estée Lauder, and well over 80 others. And it goes toe to toe with Perfect’s YouCam, which leverages 3D face scanning to enable virtual makeovers of lips, eyes, eyebrows, hairstyles, and cheeks. There’s also ManiMatch, which virtually overlays nail products atop fingernails, and Meitu’s MakeupPlus, in addition to Samsung’s Bixby Vision, which taps ModiFace’s platform to let users try on makeup from Sephora, CoverGirl, and Laneige.