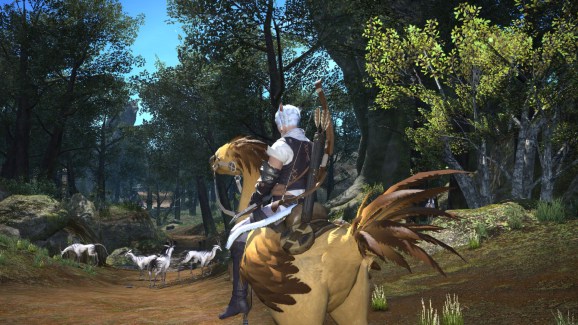 Sony announced today that it is teaming up with Hivemind, the production company behind the sci-fi series The Expanse and the upcoming TV show based on The Witcher franchise, to make a live-action TV series based on Final Fantasy XIV.

Final Fantasy has had such adaptations before — Spirits Within and Advent Children — but they used computer-generated images. Spirits Within was an infamous box office bomb, only making $32 million in the U.S. back in 2001. Advent Children was a direct-to-video sequel to Final Fantasy VII and had a better reception from fans. Seeing a live-action take on the franchise, which has sold over 144 million games since 1987, for the first time will be a fresh experience for fans.

Final Fantasy XIV is an online multiplayer role-playing game. The original version came out in 2010, but it was such a disaster that Square Enix reworked the entire experience. Final Fantasy XIV rebooted in 2013 as A Realm Reborn with a much better reception. Now the game is ramping up for the release of its third expansion, Shadowbringers, which releases on July 2.

The game takes place in a fantasy world called Eorzea filled with magic, political intrigue, and giant monsters called primals. Although FFXIV is an MMO, it’s a heavily story focused one. It should have more than enough material for a TV adaptation. Although Sony notes that it will be working on an original story, so it will not be based on the main plot of FFXIV. We do know that Cid, a mechanic that frequently appears in the game, will show up in the series. Cid is also a name used in most Final Fantasy projects for multiple characters.

“Television is the ideal medium to capture the extraordinary depth, sophisticated themes, and unparalleled imagination of Final Fantasy and its multitude of unique and fully realized characters,” said Jason Brown, Hivemind cofounder and co-president, in a press release sent to GamesBeat. “We are working tirelessly to bring together artists from around the world who are united in honoring the extraordinary legacy of this franchise and its millions of fans around the world.”

We do not know which stations or platforms the show will air on.