In Marvel’s Avengers, the heroes must work together to overcome one of their toughest challenges yet. But in real life, developer Crystal Dynamics had to assemble its own super-team of studios just to make its triple-A action game.

Coming to PlayStation 4, Xbox One, and PC on May 15, Marvel’s Avengers has the team’s core members — Captain America, Iron Man, Hulk, Black Widow, and Thor — dealing with the aftermath of A-Day, an Avengers ceremony-turned-disaster when an explosion decimates San Francisco. You’ll play as all five heroes in the single-player campaign and take them on new adventures in the cooperative multiplayer mode.

It’s the latter that makes Marvel’s Avengers sound so ambitious. During the game’s big reveal at the 2019 Electronic Entertainment Expo (E3) trade show, Crystal Dynamics promised that it’ll continue to add new stories, characters, and levels in the co-op mode after launch — all for free.

While the developer didn’t show any footage of how multiplayer works, the idea is that the Avengers have to tackle threats all around the world, and you’ll be able to go on these missions with up to three other players. They’ll tell new stories as well, ranging from individual arcs (like what the Hulk has been up to since the A-Day tragedy) to larger quests consisting of multiple levels and characters.

Crystal Dynamics views this as a multiyear endeavor, effectively turning Marvel’s Avengers into a live-service game. But the studio knew it couldn’t handle all this work on its own. Above: The story begins on Avengers Day, which commemorates the team’s new San Francisco HQ.

Up until a few years ago, Crystal Dynamics primarily made single-player games like Legacy of Kain and Tomb Raider — it’s never tackled something as big as Marvel’s Avengers. The studio’s proprietary game engine wasn’t built to handle multiple characters and gameplay styles, so it had to make some modifications. And with the help of owner and publisher Square Enix, Crystal expanded its team and recruited several other companies to work on the game.

“We had to actually rebuild part of our structure, both as an organization and as a studio,” said co-head of studio Scot Amos in an interview at E3. “You have Crystal Dynamics and what we’re used to building. We actually added a whole new studio, Crystal Northwest, because there are some skillsets and technologies and techniques we needed. Our Nixxes [Software] partner, we’re expanding them as well. We’ve worked with them for 27 years.

“Then we have Eidos Montreal, who’s owning a huge chunk of this content and partnered with us for years across all the Tomb Raiders. And then Square Enix Japan themselves, their technology.”

Crystal Dynamics added dozens of industry veterans to its Marvel’s Avengers team over the years, including director Shaun Escayg (a former creative director at Naughty Dog) and director of production Stephen Barry (the former director of product development at Visceral). Another key hire was lead combat designer Vince Napoli. 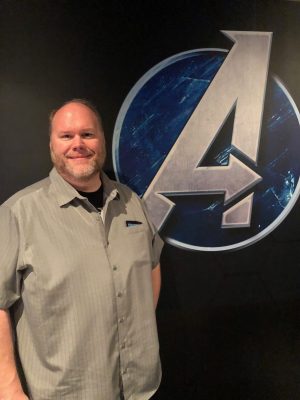 Above: Co-head of Crystal Dynamics Scot Amos at E3.

Napoli has over a decade of experience in combat design, previously working on the 2018 reboot of God of War as the lead systems designer (where his team obsessed over the finer details of Kratos’s magical axe). Given how similar those axe-throwing abilities are to Thor’s hammer Mjolnir, it’s not too surprising to see why Crystal Dynamics wanted him to work on the God of Thunder, too.

“We went and recruited people like Vince Napoli … and said, ‘You’re going to come in here and own these heroes, Vince. You’re going to [make them feel great].’ We actually built a combat team around him,” said Amos.

The combat team worked closely with Marvel Games to come up with each Avenger’s fighting style and to make sure that they reflected their respective power sets and personalities. While all characters share a core set of button combos, they also have more advanced moves that are custom made for each hero. (Read GamesBeat’s interview with Napoli and Escayg to learn more about the combat system).

“For us, that’s been an exhilarating experience, of bringing the heroism, still making them feel human — which is what both Marvel and Crystal want to do — but expanding on that list and saying, ‘We can take each of these heroes and make them awesome,’” said Amos. Above: The Hulk and Black Widow on the Golden Gate Bridge.

We’re in the endgame now

It’s clear that Marvel’s Avengers is a huge investment for Square Enix and Crystal Dynamics, and they’ll certainly need all that manpower to not only finish the game, but to deliver on their lofty post-launch goals. For Amos, that’s the most exciting part: that the game will continue to evolve even after you’re done with the campaign.

The co-op missions actually start opening up as soon as you unlock the other Avengers in the story, with some being critical to the campaign (and thus mandatory) while others are optional. Completing these side missions will provide more experience points for your characters, as well as new gear that you can use to strengthen them.

The other heroes that Crystal Dynamics plans to add as downloadable content will have their own stories, creating new quest lines and objectives. The same goes for the new regions that are also coming as DLC. These co-op missions will serve as endgame content for players, to keep them engaged with new narratives outside of the A-Day storyline.

“Now you have all your heroes unlocked, you have missions around the world, you have this base of operations that will let you choose which missions and threats that you want to go face … . And all of that is where we keep expanding, by adding more heroes and more regions for you to go and fight and face all the threats that are coming,” said Amos.