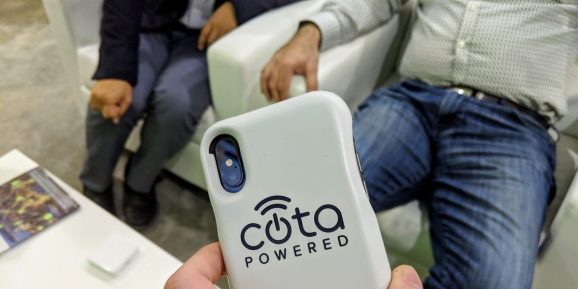 Ossia, the Seattle, Washington-based company developing products capable of transmitting and receiving electric power at a distance, today achieved a small but significant milestone in its years-long journey toward commercialization. The company says the Federal Communications Commission (FCC) has certified its Cota wireless power system for both Parts 15 and 18 of the agency’s rules governing electromagnetic compatibility, clearing the way for Ossia to market and sell its technology in the U.S.

The initial certification covers a 2.4Ghz transmitter for commercial, industrial, and enterprise deployments at a distance of up to one meter. Ossia expects devices based on the equipment authorization to come to market in 2020 through commercial partners.

“This certification is a meaningful step toward achieving our vision of powering the future through Cota Real Wireless Power,” said CEO Mario Obeidat. “Not only does it validate the safety and effectiveness of delivering wireless power at a distance, it paves the way for the enablement of billions of devices and sensors in the future that cannot be wired or supplied by batteries. Importantly, it is the first to do so for real-world environments where people can be present in the charging area.”

Part 15 is the portion of Title 47 within the FCC’s Code of Federal Regulations regarding unlicensed transmissions. It regulates everything from spurious emissions to unlicensed low-power broadcasting, and because practically every electronics device radiates emissions, most have to comply with Part 15 before they can be advertised or put up for purchase. Part 18 concerns industrial, scientific, and medical (ISM) portions of the radio spectrum reserved for the use of radio frequency (RF) energy in applications other than telecommunications, like microwave ovens and medical diathermy machines. Bluetooth devices, garage door openers, and baby monitors are among products tapping ISM frequencies.

Ossia says it worked with the Office of Engineering and Technology, the branch of the FCC that advises the Commission on frequency allocation and spectrum usage, to demonstrate that its system — Cota — met the agency’s Specific Absorption Rate (SAR) safety requirements. (The FCC requires that phones, for instance, have a SAR level at or below 1.6 watts per kilogram taken over a volume containing 1 gram of bodily tissue.) Ossia claims that Cota is the first product of its kind to meet the FCC’s exposure standards in a “dynamic environment,” is the first to not require a motion detector or exclusion zone, and has the highest level of RF power delivered.

“Much [as] Wi-Fi is ubiquitous today, we envision that Cota wireless power will positively impact billions of lives around the world as a critical enabler of existing and emerging technologies, including 5G and the internet of things,” said Obeida. “We are committed to continuing our collaboration with the FCC and the OET to bring the full range of wireless power at a distance to the broader market to enable our 5G economy.”

Cota’s first-generation transmitter could send about one watt to a smartphone sitting three to six feet away, while its Cota Tile product could charge devices up to 30 feet away (or 50 feet, with two transmitters working in tandem). Cota 5.8GHz, which was announced at the 2019 Consumer Electronics Show in January, is vastly improved; it’s able to deliver roughly 4 times greater power with a same-sized transmitter and receiver antenna. And because it operates in the 5.8GHz spectrum, it’s less susceptible to interference from surrounding wireless signals.

Ossia says it will continue to work with the FCC to attain certification for Cota 5.8GHz.

In September 2018, the Bellevue, Washington-based startup said it would team up with Walmart to help the retailer cut costs in its thousands of stores, Ossia’s fourth such partnership that year. Building on this commitment, the company revealed in May that it’s collaborating with T-Mobile to develop a first-of-its-kind, wirelessly powered internet of things (IoT) asset tracking solution that will be piloted in Walmart distribution centers later this year, ahead of a production run in 2020.

It’s a meaningful step toward a mass-market launch for Ossia, which has raised more than $35 million to date and counts smartphone accessory maker Spigen among its growing list of partners. But the company faces competition from Powercast, a startup founded in 2003 that is developing an at-a-distance wireless power system, and Energous, which is licensing transmitters that can send power through the air to devices up to 15 feet away. Like Ossia, Energous and Powercast are developing Part 15- and Part 18-approved products.

Unlike some of its rivals, however, Ossia is no newcomer to at-a-distance charging. Roughly a decade ago, the company developed its first wire-free, over-the-air transceiver that could beam electricity to devices anywhere within range. In the years since, it has released kits that include a wirelessly powered AA battery replacement (the Forever Battery); licensed designs to antenna companies; built out a cloud-hosted management platform; and recruited ecosystem partners like Displaydata, Molex, and Motherson.