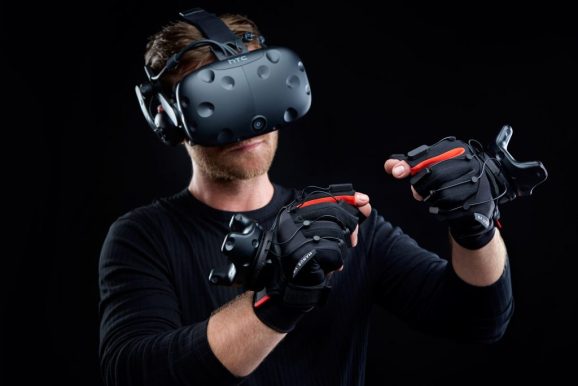 Manus has some new haptic gloves for VR.

I originally tried out the Manus VR gloves almost three years ago. In VR years that’s basically an entire lifetime ago. Back then it was rudimentary at best and we’ve seen several other solutioins from companies like Contact CI, Tactical Haptics, and HaptX. Now it looks like Manus is back with a new evolution of its controller design called the Manus Prime Series.

The Manus Prime Series has three variations: the Prime One, the Haptic Prime (shown in the featured image up above), and the Xsens Prime.

According to a company representative via email, the differences are as follows:

The Prime One is the core of our product line, an all-round wireless data glove that tracks individual fingers on two joints, and that can stream the data directly into Unity, Unreal, Motionbuilder or one of the large enterprise software platforms such as IC.IDO or Vizard.

The Haptic Prime is a Prime One with linear resonant actuators. It provides unique haptic signals depending on the type of material and how much virtual force is applied. Haptic feedback is fully customizable in the user interface, with an integrated material editor and adjustable signal strength, frequency and resonance.

Finally, the Xsens Prime is a glove designed for integration into a Xsens motion capture suit, to complete the hand with finger data on their IMU suits.

We have zero experience with any of these three new products so we can’t comment on their quality or effectiveness, but it’s certainly exciting to see a company continue iterating on and improving their technology. Glove-based interaction has a lot of potential for the future of VR, especially if we’re looking to pop fiction as inspiration. Hopefully we get a chance to try these new versions at SIGGRAPH later this year to provide hands-on accounts.