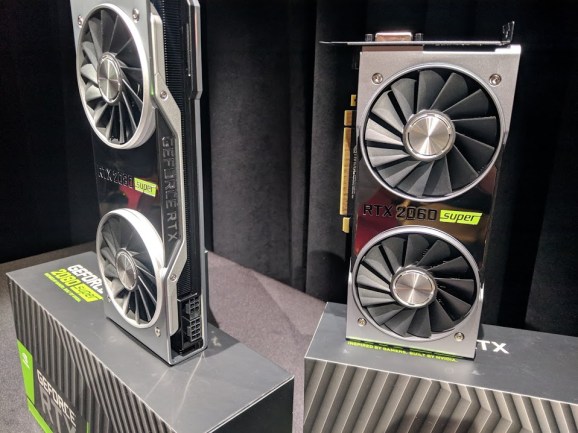 AMD isn’t just putting pressure on Intel. The company has some new graphics cards coming out July 7 that could make Nvidia uncomfortable as well. Except Nvidia has a couple of cards up its sleeves in the form of the new Super RTX cards. And they are so fast that they reset the value proposition for the RTX lineup.

So are these cards really super? Yes. Absolutely. The 2060 Super and 2070 Super are beasts. And if you held off on purchasing an RTX card up to this point, you should feel really good about that decision.

In this review, I’m going to focus on the comparison within the Nvidia lineup. We’re gonna have a chance to compare these cards to AMD’s newest releases at some point in the future. And that just makes a lot more sense.

But let’s put it this way. The RTX 2070 Super is $500, and it’s often faster than a $700 Radeon VII. I really liked the Radeon VII when AMD debuted it, but I bet Nvidia liked it even more because it enables that astonishing comparison.

Here’s what I tested on:

Again, I didn’t test anything from AMD, because the Radeon RX 5700 and 5700 XT are coming soon. Once I get a chance, I’ll do a full comparison.

When Nvidia first launched RTX last year, it definitely felt like the company wanted to hold the status quo on traditional rendering performance to instead focus on marquee features like ray tracing. That technology is slowly coming into its own. Coming out of E3 2019, major games like Cyberpunk 2077, Call of Duty: Modern Warfare, and Watch Dogs: Legion got confirmed support for the tech.

But people don’t want to hear about vague, possible futures when they’re spending $500. And when it came to true, real-world performance, Nvidia’s cards just weren’t much better than the excellent 10-series GTX GPUs.

RTX Super answers all of those issues. The RTX 2060 Super feels like the obvious choice for anyone looking for the best bang for their buck. Sure, it’s $400, but it’s easily worth saving up an extra $50 to get over the OG 2060. The RTX 2070 Super, meanwhile, is a monster that destroys every other card on the high end. It’s by far the best $500 GPU. It brings 1080 Ti-level performance down to the high-end edge of mainstream pricing.

And unless you have a very specific reason to go with AMD, Nvidia just ended the Vega and Radeon VII unless they get some serious price cuts.

They need more power, but of course they do

I kept track of my total system energy use through a Kill A Watt meter, and you can see that the extra performance of the Super cards come from some extra wattage. The 2060 Super doesn’t use as much as an RTX 2070, and a 2070 Super doesn’t quite use as much as an RTX 2080. But yeah, you’re going to need more energy and deal with more heat than their direct predecessors.

And yes, I’m stretching here for something that you won’t like. This is how these upgrades work. Nvidia has years of experience squeezing the most performance out of its platforms, and it is doing that once again.

The RTX Super cards are just what Nvidia needs right now. They trump the Radeon VII, and they put the GeForce products in position to do battle with the upcoming AMD releases.

But more importantly for Nvidia, the 2060 Super, 2070 Super, and (soon) 2080 Super are the elixir for its RTX ails. If you are skeptical of ray tracing, then now you can ignore it without feeling like Nvidia is ignoring you. These GPUs have your traditional rendering performance gains and then some.

If you were waiting for a GPU, well — you should wait at least another couple of days. Let’s see what AMD is doing with the RX 5700 XT and RX 5700. But at that point, I think you are safe to stop hesitating.

The RTX 2060 Super and RTX 2070 Super are available July 9 for $399 and $499, respectively. Nvidia provided GamesBeat with review samples for the purpose of this review.