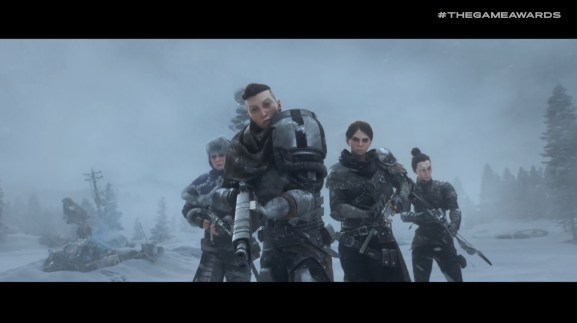 Improbable CEO Herman Narula might be the most enthusiastic person I’ve ever interviews in my 22 years as a journalist.

He smiled throughout our 20-minute interview back in March at the Game Developers Conference 2019 in San Francisco, and he got especially excited about where his company is five years after its founding, big SpatialOS games coming out this year like Scavengers (what its creators call a “co-operation” game), and where streaming fits into the market.

It’s a fun conversation, and it’s one I hope you enjoy as well in this edited transcript.

GamesBeat: When it comes to getting to this stage, how long has it been to get to the point?

Herman Narula: About five years. I remember when we first started the company, we had a game design in mind. It’s still written in permanent ink, accidentally, on a window in my house. We had to abandon that because we quickly realized that the technology to make it real was just too hard. That’s why we built Improbable, to solve those problems and open up the possibilities for innovation in multiplayer games. Now that our community is growing and we have some great partners and we’re mature in our tech, we’re finally able to look at games again, as a way of both supporting our partners and realizing some of those dreams.

GamesBeat: What does this moment mean for you?

Narula: It’s almost full circle. It’s back to the reason we started the company in the beginning, which was to be able to go on that journey with content creators. We’re not making the game. The studio in Edmonton is doing it. But it’s this really passionate feeling of watching them and seeing them discover the technology. Also, it’s amazing because we’re finally at a point where we’re mature enough in our tech to where partners have announced – NetEase and others – that dream is beginning to take shape. It’s a long way to go. It’ll be years before we can realize the industry transformation we’d like to see happen. There’s a lot of people entering the space, a lot of partnerships that are now possible. It’s a big deal for us.

GamesBeat: How has SpatialOS matured?

Narula: Massively, massively. We gave a talk on it just now. We’ve gone from being a very low-level technology that only very large companies could take best advantage of it. We’re now offering an ocean of tools and services that make it possible for any team to build basically any multiplayer game much more efficiently.

Efficiency is important. It’s not just about innovation or scale. It’s about being able to do things quicker and better. It’s taken a year to get to that point. We’re soon going to be at a point where we have other stuff to announce that will really catalyze our ecosystem. 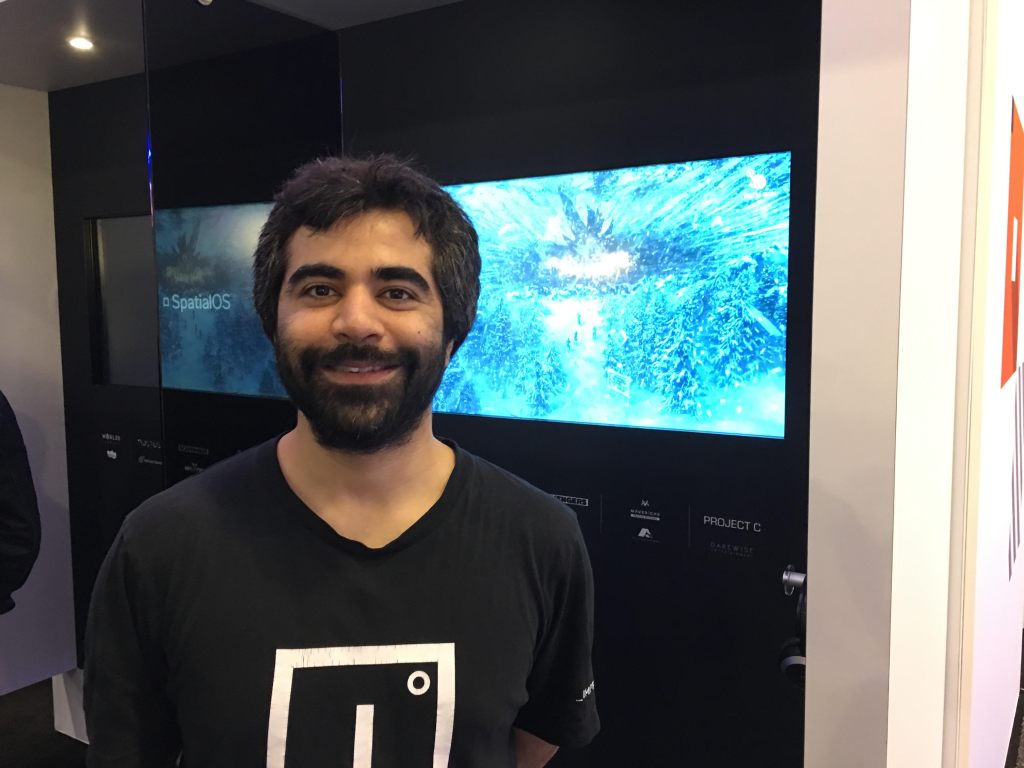 GamesBeat: Quicker and better is a theme I’ve noticed from a lot of companies here this year.

Narula: It should be. As an industry, our number one problem is too little content. It might seem weird to say that, given how many games are out there, but at certain fidelity bars, with certain types of content, we’re incredibly underrepresented. I’ll give you an example. There are no prominent high-fidelity free-to-play realistic military shooters. There are none. That’s really strange, for a world where that is a massive area of demand. There are no more MMORPGs. No one makes them anymore, not at a certain scale. There are no variations on that theme. Where are the Minecraft competitors?

The rate of innovation in other areas is very high, because in those sub-segments of the market—there are certain types of game that have a certain barrier to entry, a level of fidelity, a level of technology, which means that although there are a lot of games in general, there are very few for those particular moments of people’s time. That’s part of why things like Fortnite and Apex Legends have exploded. They’re great games, but there’s also not a lot else to play for people who want similar experiences.

GamesBeat: When it comes to Improbable and SpatialOS, you’re talking about high fidelity.

Narula: Well, when I say “fidelity,” I want to clarify that. I don’t necessarily mean big, flashy games. By fidelity I mean, in very technical terms, the complexity, the update rate of the game. A shooter is more complex than a non-shooter game. Multiplayer in general is just hard for people. So when I say fidelity I mean that quality, more than anything else.

GamesBeat: Is Improbable something that will be effective for mobile development?

Narula: One hundred percent. We showed off a working demo in our talk of Rob putting a mobile client into our 200-player FPS Unity project, while PC clients ran around and interacted. The technology has been designed from the very beginning to be VR compatible, mobile compatible. Even things like streams. Streaming is just another client, like Stadia. You saw we were on the partner slide. We’re going to be supporting all of this stuff, because our technology was designed from the beginning with this future in mind. It’s taken a while for us to get to proper mobile support, but our partnerships in China are accelerating that.

GamesBeat: Is a tech like this key to making streaming work?

Narula: I wouldn’t want to go that far and put words in anyone’s mouth. But I would say that a lot of the promises around streaming, massive destructible worlds and all the rest of it, require something like SpatialOS to happen. You can take the client and put it in the cloud, and that’s great. That will improve many things. But if you don’t do something about distributing the server, you’ll never get to the things that have been talked about. 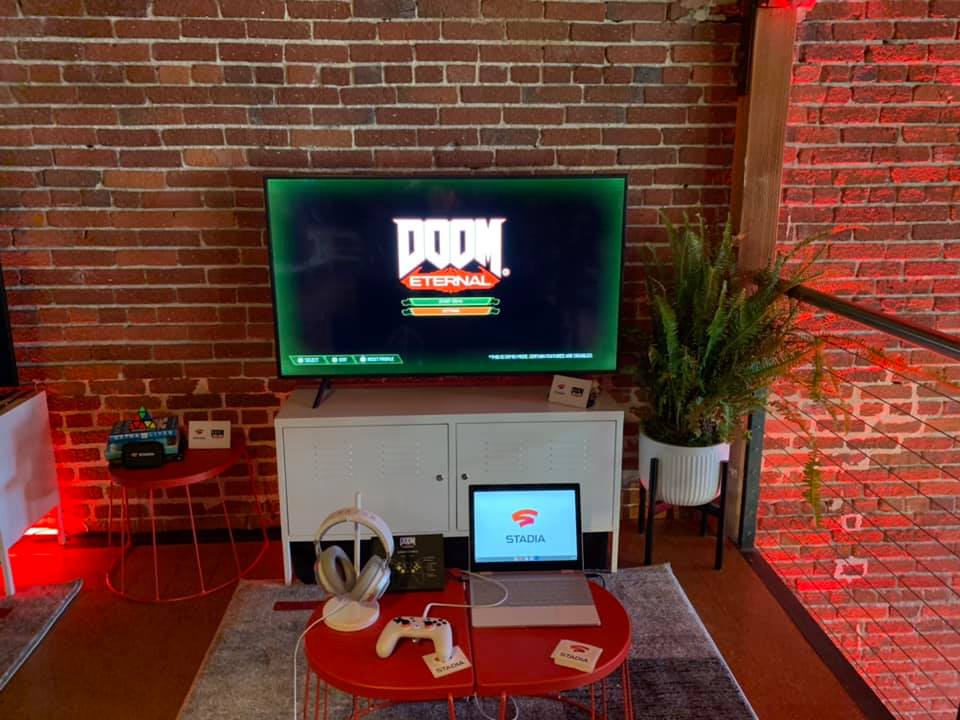 GamesBeat: What do you think about Google Stadia?

Narula: I think brilliant, absolutely brilliant. I love the people involved. I’m a massive fan of Jade Raymond. I’m a massive fan of Phil Harrison’s work in other places. Google has picked good people. They’ve put in a serious amount of money, time, and energy. They’re doing something exciting. The fiber network stuff they’ve got is cool. I don’t know if it’s too early. I don’t know what the right timing will be. If I could predict that I’d be picking stocks. As a gamer, I want to see it succeed, and I think it’s a huge benefit for people doing work like ours.

GamesBeat: Are you working directly with Google?

Narula: We were on the partner slide. That’s all I can really say.

GamesBeat: When it comes to 2019 games that are using SpatialOS, what’s going to be the killer app this year?

Narula: I wouldn’t want to speak for my customers. I think the most prominent game is probably Midwinter’s game Scavengers. I don’t want to talk about release dates or anything like that. People have played it. PC Gamer played it. Also Nostos, by NetEase, is looking bigger and bigger. That’s a very big experimental project inside NetEase.

GamesBeat: Tell me about that game.

Narula: He was inspired by the Halo Warzone mode. He was thinking, what if we could create a multi-team cooperative competition environment that takes advantage of a lot of what we learned there, and took it to a larger scale? He came to us because he needed more in that session to make it work. I think battle royale will give way to multi-team, multi-objective, cooperation environments that are richer, that go beyond just PvP, that have a lot of PvE in them as well. I think there will be a whole family of games like that. I think Scavengers is a real contender in that space.

GamesBeat: The proto form of that is Apex Legends, right?

Narula: I agree. Apex is in many ways a progression of the genre. It’s teaching a generation of people how to play first-person games as well, which is really interesting.

GamesBeat: When you look at 2019, what’s your big hurdle?

Narula: For us it’s this last 10 percent of going from a really cool platform that a lot of larger companies and early adopters are able to use, to that finished market product. What you’re seeing us announce with things like mobile support and Unreal integration and all those pieces, that’s our journey to get to the point where we can really take off.

GamesBeat: How big is your company now?

Narula: We’re about 340 people at the moment. We’re growing, but not gigantically. We’re growing in certain areas, in key places like development studios, engineering, and beyond. But we’re not aiming to become a multi-thousand-person company right now. We’re struggling to deal with the problems of scale and growth as a company. We’re all very young entrepreneurs. We’re new at this. We don’t want to get too big too fast. We want to learn how to do this a piece at a time.

GamesBeat: What’s your big lesson relative to Epic and Unity? What have you learned from this?

Narula: The big thing is, developers deserve to choose where they run their engines, what engines they use, and to make free choices. I’m very glad Unity chose to change their terms of service back again to make it so that everyone can make the choices they want to make. I’m even gladder that they and Epic and Crytek all publicly vowed, all of them, within that week, that they’ll never do this shit again. That’s a wonderful thing for developers. We learned the lesson that the community is everything. We had to talk to the community and tell them what was happening and work with them to figure things out. They’re the heroes of that whole encounter. The community decided what should happen, what we should do, what Unity should do. They spoke and everyone listened. The development community flexed its muscles there. Also, there was a really great Star Wars parody of the licensing dispute. That’s the other thing I like. Star Wars parodies will pop up anywhere about anything. Watching a parody about licensing is the most bizarre experience ever.

GamesBeat: Are you surprised at how quickly that all came about?

Narula: Everything is quicker now. Everyone’s so connected. There’s such a crowd online all the time. I think we should all be less surprised at the exponential rate at which ideas propagate. Look at how fast Apex grew, versus Fortnite, versus the games before. We’re in this hyper-connected world now where an issue can spark and resolve in moments. Quicker and better. That cycle time is really important, because that’s going to explode innovation. We as an industry have to stop thinking we’re in the games business. We’re not. We’re in the everything business as a games industry. We are all of consumer experience. That’s what we’re going to become. The kids who are eight, nine, ten years old now, they see this as more than games. What we’re building for them—there are a billion more gamers now than there were five years ago. It’s a crazy world.

GamesBeat: On a personal level, is it good not to be fighting with other platforms and other engines?

Narula: To be clear, we don’t see that as a fight. We had a problem. We talked about it. They resolved it. That’s a wonderful thing. We’re thankful for what they did. We stick to Unity now. We want to be friends. It doesn’t help anyone for there to be any animosity between any platforms. It hurts everybody. We’re sad that that’s the way it worked out, but we’re glad with this resolution.