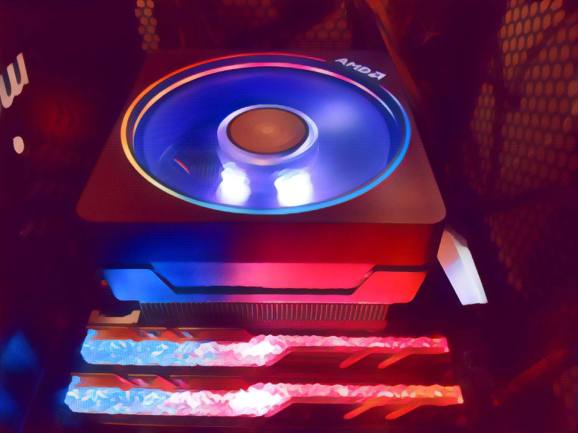 An AMD Ryzen CPU with a cooler.

I’m reluctant to celebrate people lining up to purchase a product. Companies frequently exploit our need to find a good deal to get us to stand outside of stores in the twilight hours of the morning to get Black Friday discounts. But those deals are often illusions — or, at least, they aren’t as great as they seem when you’re looking at the Target ad with a belly full of turkey.

But people lined up at stores around the world this week to get their hands on AMD’s new Ryzen 3000 CPUs. To me, this is a clear indication that AMD’s strategy is working. The company wants to create a sense of value that is equivalent to a Black Friday deal. And with the Ryzen 9 3900X and Ryzen 7 3700X chips, it has done that. You can read all about it in our review.

So how is it creating that value? Well, the new Ryzen chips are actually significantly faster than the competition often at the same price and frequently even lower. But I think AMD’s focus on features like core count is also making a big difference here.

I’m here for the cores

Sure, the Ryzen 3000 CPUs are using the new 7nm architecture. This enables them to hit higher processor frequencies while also doing more instructions for each one of those MHz. They also support new features like PCIe 4.0, which gives the CPUs higher data throughput for communicating with storage devices and more lanes for extra expansion.

But I do not think that people would be lining up in the same way if AMD didn’t have a 12-core and (soon) a 16-core CPU. Even if you don’t want to spend $500 on the excellent 3900X yourself, AMD is grabbing attention of enthusiasts who have likely lived a life of computing on quad-core chips at most.

The biggest reason people are lining up for the Ryzen 3000 chips is because, for the first time since the Athlons of the early 2000s, you aren’t settling by going with AMD. The Ryzen 9 3900X is a better bargain than the i9-9900K — just like AMD has offered up a better deal on its chips for years now. But the 3900X is also just better. It’s faster in virtually every productivity task, and it’s effectively even in gaming.

People love a deal, and people love to buy the best. What AMD is offering is the elusive opportunity to get both in the same products.