One of the sports desks I worked on had a motto: “Busywork is happy work.” This was the mantra of my boss and me whenever we worked on the agate pages (the part of the sports section in a newspaper with all the box scores, standings, betting odds, and so on). You didn’t have to make any decisions about headlines, about catchy ledes, about pictures — you just laid in the copy and made it fit.

It kept you busy throughout a shift, but not too busy that you couldn’t keep an eye on a game on the TV or joke around with your coworkers.

And in a similar manner, so is Dragon Quest Builders 2 (from Koei-Tecmo‘s Omega Force studio and publisher Square Enix for PlayStation 4 and Switch, both platforms reviewed). This world-building spinoff (the first was one of my favorite games in 2016) from the Dragon Quest role-playing game franchise may feel like Minecraft, but it offers a narrative and quest structure that helps direct your building.

It takes place in an alternate reality of Dragon Quest II’s world, one in which the hero fails. The Children of Hargon (he was one of the big bads of that game) have taken over, destroying everything that’s good and green. You’re a builder, the folks the Children of Hargon blame as the world’s biggest threat (and from their point of view, they are), and you’re out to restore the world. As you go, you make friends — convincing some with your actions that builders are indeed good and just, not evil — as you rebuild the world (and add some nice flourishes of your own if you decide to go beyond the assigned quests). Warping around the vast maps is also a welcome improvement.

Join this to the comforting familiar and puntastic Dragon Quest, throw in better construction tools and materials, and multiplayer capability, and you have a sequel that builds on the series in every way possible, as I found with the PS4 version.

The other day, I was exhausted. I was Daddy Taxi, taking not just my kids but my nephew around town to swim lessons, lunch, and summer camp. I also ended up at my in-laws to pick up my wife after her car wouldn’t shift into any gear, and now we face a $1,500 repair on a 13-year-old car. 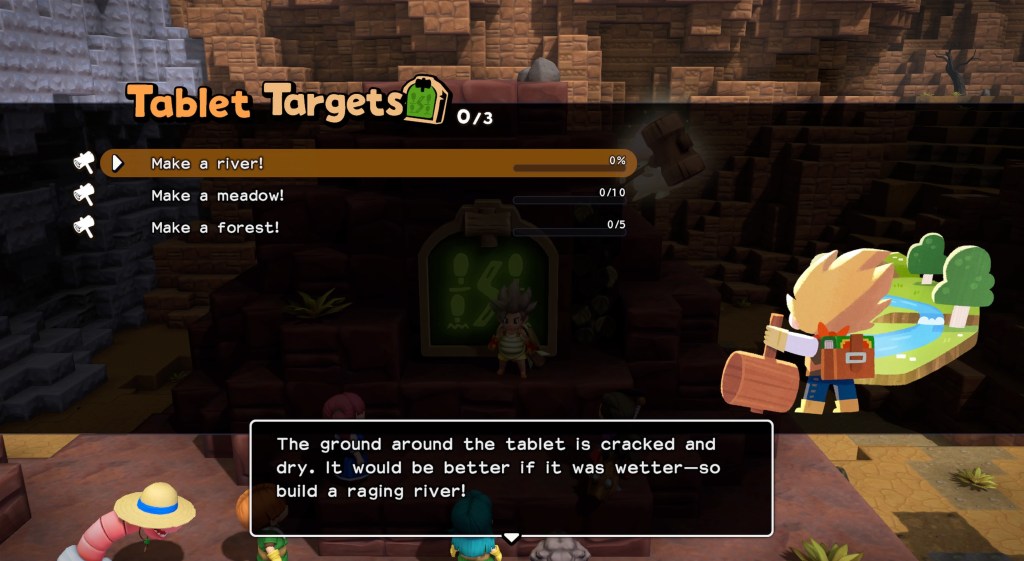 Above: A river runs through your quest to rebuild the world.

Dragon Quest Builders 2 revitalized me. My task was simple: Build a river. It’s like the island’s Mississippi. My friends and I find an empty riverbed, and with our Dragon Quest version of a Decanter of Endless Water (of course I find a way to shoehorn in a Dungeons & Dragons reference), we fill up squares until we have a river. It takes me about 10 minutes to do this, and you know what? I ended up so relaxed and satisfied afterward. And this is how I feel after most of the quests. Most of them aren’t difficult, and while some are time-consuming, I only felt frustration with one (see below).

This is Dragon Quest, so you know it’ll have plenty of puns. I’ve enjoyed most of these over the decades, and Builders has one so delicious that it works two ways. I won’t spoil it for you, but I enjoyed this one far too much.

That it happens with an agent of Hargon who switches sides and becomes a sort of shepherd to your folk makes it even more enjoyable.

The quests provide a fantastic framework for teaching Dragon Quest Builders 2’s mechanics, and none of them have any true urgency. So if you have enough materials and the inclination to do so, you can throw together other buildings and decorations as you see fit.

I did a bit of this, adding small homes, warehouses, and a cooking area to my farm. I added other embellishments as well, such as columns and knick-knacks. Doing so provides a welcome break from the quest, especially if you’re having trouble finding the materials you need for your jobs. 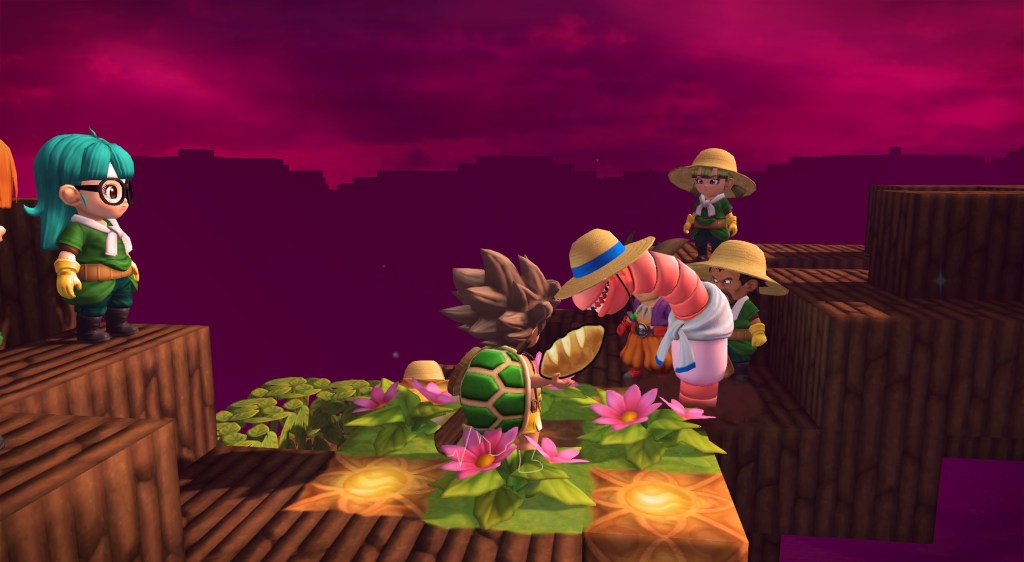 Above: Wrigley the Worm is your best friend.

On Furrowfield Farm, your first set of quests, you gather materials to create the Deitree, a massive life-giving plant essential to the island’s health. However, creating it becomes a royal pain (at least for me).

You receive a blueprint (you get these and recipes to create things in Dragon Quest Builders 2). Now, for a massive structure such as the Deitree, blueprints show you what something looks like and the materials you need to build it. And when you place a block in the right place, it glows with a white light.

My problem came from doing multi-level buildings like the Deitree. It turns out I missed a block or two. You have to check the blueprint, going to another screen, to make sure no red blocks point to things you missed. I wish this was all on one screen — or that I could press a button to place all the needed materials if I have enough in my inventory. I lost a couple of hours to this. Be more careful than I was!

Dragon Quest is one of my favorite RPG series. You do level up a little, but it doesn’t offer anything else. Combat is straight “hit them until they die” — no interactions between weapon types, resistances, magic, and so on. No spellcasting. No choosing abilities. Maybe we’ll see more of this in a third game, but I doubt it. 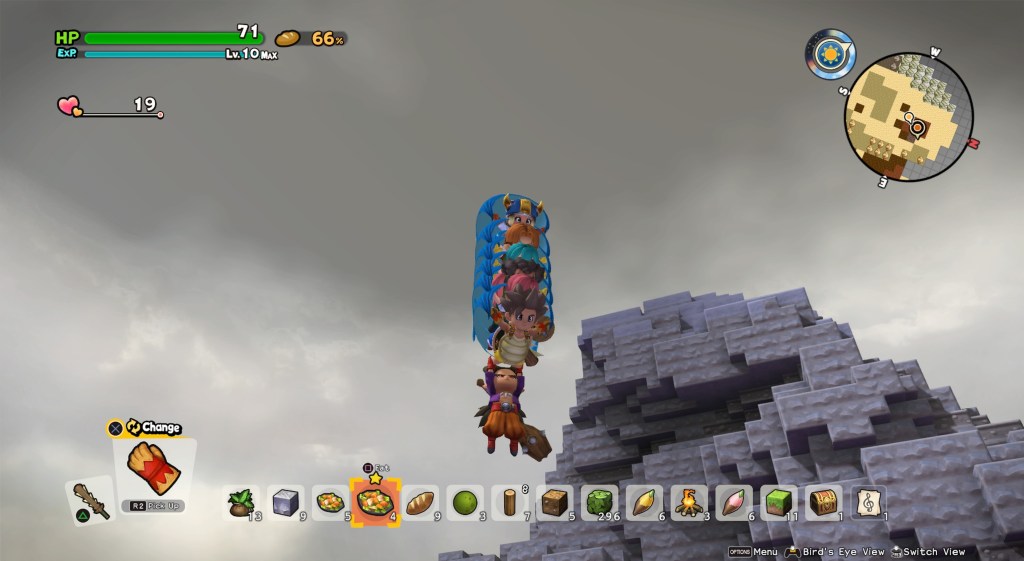 Above: More industrious than a Goomba stack.

Dragon Quest Builders 2 is better than the original in every way, and I enjoyed the more than 25 hours I put into it. It eases you into how to find materials and build structures, and the quests provide a guiding hand for teaching you how it works.

I found just one thing tedious, so that’s a win as well.

Almost all of my time with Dragon Quest Builders 2 has been pleasant, and I look forward to building more, either with my kids playing along or by myself, sipping a beer and relaxing after a long day.

Dragon Quest Builders 2 is out July 12 for the PlayStation 4 and Nintendo Switch. The publisher provided GamesBeat with a digital PS4 code for the purposes of this review.