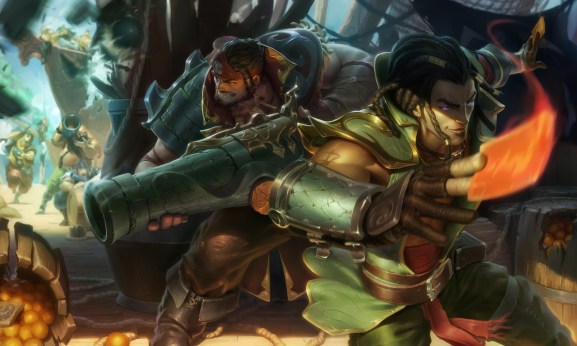 Riot, a developer that has now released two games, is preparing an update for its auto-battler Teamfight Tactics. This is the first “official patch” for Teamfight Tactics, and it includes a number of major changes and new features.

The biggest additions to Teamfight Tactics are the character Twisted Fate and a ranked mode. Twisted Fate is a suave pirate scoundrel, so he’s basically just like me. For the ranked mode, you can now start climbing a ladder against other players. This should give competitive players an outlet for their ambitions.

Riot is also changing the way certain drop conditions work. If you don’t get an item at the end of a round, monsters and minions will now give you gold.

But considering that Riot is still in the early days of Teamfight Tactics’ life, the studio is still hyper-focused on improving the overall experience.

“We made a boatload of balance changes and bugfixes,” Riot developer Blake Edwards wrote in a blog post. “Many tier 3 champions felt underpowered and not worth picking up given their price, so we’re buffing a number of them to make them worth considering even at a single star. Conversely, many tier 4 champions have been nerfed as they were proving to be powerhouses sometimes even without the need for synergies or additional stars.”

The future of Teamfight Tactics updates

Teamfight Tactics debuted in June. But now it is shifting from its launch phase into an ongoing live-service. That means Riot is planning to regularly update it with patches.

“TFT will be patching on a weekly cadence,” reads Edwards’ blog. “[This will be] split between the regularly scheduled League of Legends patch with larger changes and a B-side one on the second week of that patch limited to balance changes and emergent bugfixes.”

You can read through the entire changelog on Riot’s website. It breaks down what is new, system changes, and shifts in character traits. Check it out.