Building any new digital product, service, or feature can be fraught with challenges from the outset — but when it’s ready to go to market, explaining clearly to users how it works and what its benefits are is integral to its chances of success.

And that’s why Alexis Fogel, cofounder and former chief product officer at Dashlane, elected to launch Stonly, a startup that focuses squarely on helping product teams, customer support staff, and even bloggers explain how certain tools and services work.

Stonly was founded in 2018, and for the past seven months it has been in private beta mode with a handful of customers — including its first client Dashlane — ahead of today’s official unveiling. In a nutshell, Stonly is striving to help businesses generate interactive, step-by-step online guides that can be embedded anywhere, such as a blog, a company’s customer support webpage, or directly inside customer support software such as Zendesk.

“Stonly solves two problems that every company has: explaining how their product or service works, and providing accurate and digestible user support information,” Fogel told VentureBeat.

By way of example, a company or publisher could create a guide on how to switch from iPhone to Android, how to manage your Facebook privacy, or how to activate dark mode in iOS 13, and then embed this walkthrough on a website — replete with text, photos, illustrations, videos, and code snippets.

Stonly is a completely different proposition to that of Dashlane — but it was Fogel’s experiences at Dashlane that encouraged him to jump ship for this new venture.

“As Dashlane cofounder and chief product officer, I was focused on the global customer experience and was overseeing the user support team,” Fogel said. “As [the] user base at Dashlane grew, so did the number of issues with the product and the support. I was frustrated that there was no solution that could provide a good troubleshooting experience to the user, nor one that could provide interactive guides to users while getting useful insights on where they got stuck.”

Fogel began building the foundations of Stonly as a side project while still at Dashlane — and when he realized there was a genuine need to join the dots between support content and product at every company, he was convinced this problem needed his full attention. Moreover, he also convinced Krzysztof Dąbrowski, who oversaw UI and UX design at Dashlane, to join him as cofounder.

“I founded Dashlane when I was still in college, and always wanted to apply the knowledge from Dashlane to a new venture,” Fogel added.

A quick peek elsewhere in the product support realm reveals a burgeoning landscape for support tools and product walkthrough guides. San Francisco-based WalkMe, for example, operates a “digital adoption platform” that enables companies to integrate user-centric product walkthroughs into their software — it raised $50 million last year, taking its total funding past the $200 million mark. Then there’s Boston-based Appcues, which raised a $10 million series A round last year for a user experience platform that includes tools for creating product walkthroughs and prompts. Elsewhere, Raleigh’s Pendo closed a $50 million round, and Whatfix nabbed $12.5 million for a digital adoption platform that show users how to use the software.

At its core, Stonly is a similar proposition to all of these, except its guides aren’t strictly part of the specific software product — they can be embedded pretty much anywhere online.

“We allow companies to create comprehensive guides that can answer all the issues from the users, embed them contextually where they are the most relevant, and get data about their usage to improve them and the product they describe overtime,” Fogel said. “We are the first company focused on productizing support.”

Stonly guides can be embedded in a number of ways. A link can be pasted to any website that supports Embed.ly, which includes Medium, Reddit, Kickstarter, Livefyre, and Disqus. Alternatively, iFrame code can be used in content management systems (CMS) such as WordPress. And a special Stonly widget can be added to any website, which allows companies to include contextual support guides to users in situ as they’re using a service.

Stonly is making its business model clear from the get-go, with three core plans. There is a free incarnation that allows users to create up to 20 public “stonlies,” as the company calls them, but they will run ads, and the product also lacks some premium features.

There is a pro version, costing $29 per month, that enables unlimited public and private stonlies and analytics. And the Team offering, which weighs in at $99 per month, includes additional tools such as the ability to manage user access rights, advanced embedding options (such as Zendesk integration), multiple languages, and more.

The analytics, specifically, could be a core selling point for many potential customers — it outlines how people are interacting with a particular guide, how long they’re spending on each step, and where they may be dropping off. 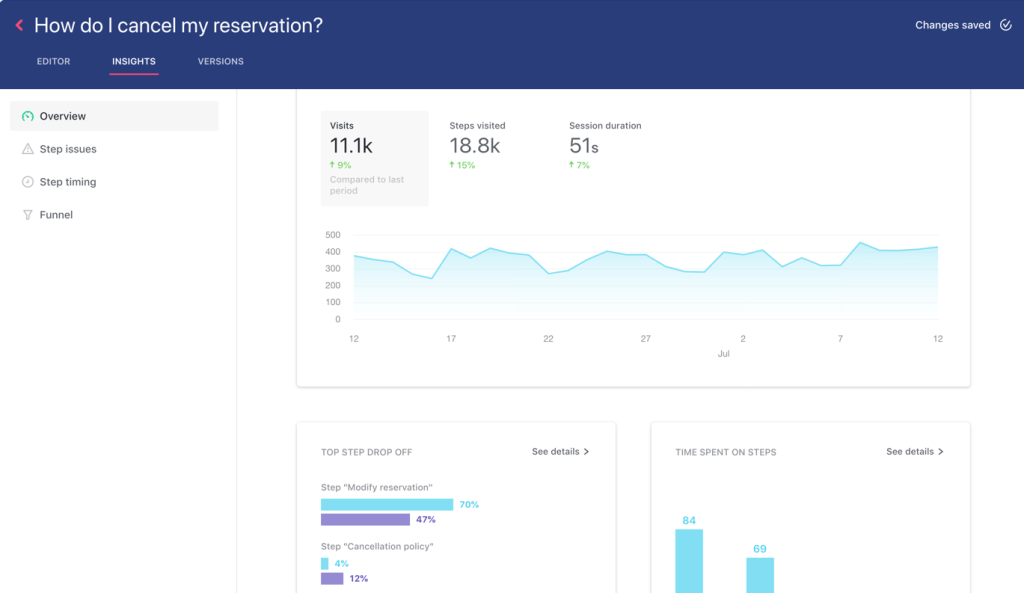 It’s also worth noting here that Stonly has closed a seed round of funding to see it through its development and launch phases — Fogel didn’t divulge a figure, but he did note that Eventbrite CTO Renaud Visage was among the backers.

Stonly is officially open to the public starting today.