Marvel Ultimate Alliance 3 is in this weird place. It’s a throwback to the kind of simple cooperative beat-’em-up games you don’t see a ton of anymore.

Its predecessor, Marvel Ultimate Alliance 2, came out all the way back in 2009. That’s one year after the first Iron Man movie launched the Marvel cinematic universe. Not only have games changed a lot in that time, but Marvel has become a gigantic brand far better known for their films than comics.

And so Marvel Ultimate Alliance 3: The Black Order (which comes out July 19 for the Switch) must dance between its nostalgic gameplay roots and the modern influences of the MCU. And it does this pretty well, but design issues keep the experience from feeling like anything special.

A giant roster of superheroes

Marvel Ultimate Alliance 3 is a action role-playing game. You and up to three friends each control a superhero. They all have some kind of regular attack, heavy attack, and four special moves. You also have a special meter that lets you use a ultimate attack once its charged. It’s pretty basic stuff.

The fun, however, comes from the giant size of the roster. You have a ton of different characters to choose from, each with their own abilities, and you keep unlocking more of them as you play. You have a lot of the heroes you would expect, especially considering their popularity in the Marvel movies. You can pick from the Guardians of the Galaxy, the high-profile Avengers like Captain America, Thor, Iron Man, and The Hulk, and famous X-Men like Wolverine, Beast, and Nightcrawler. 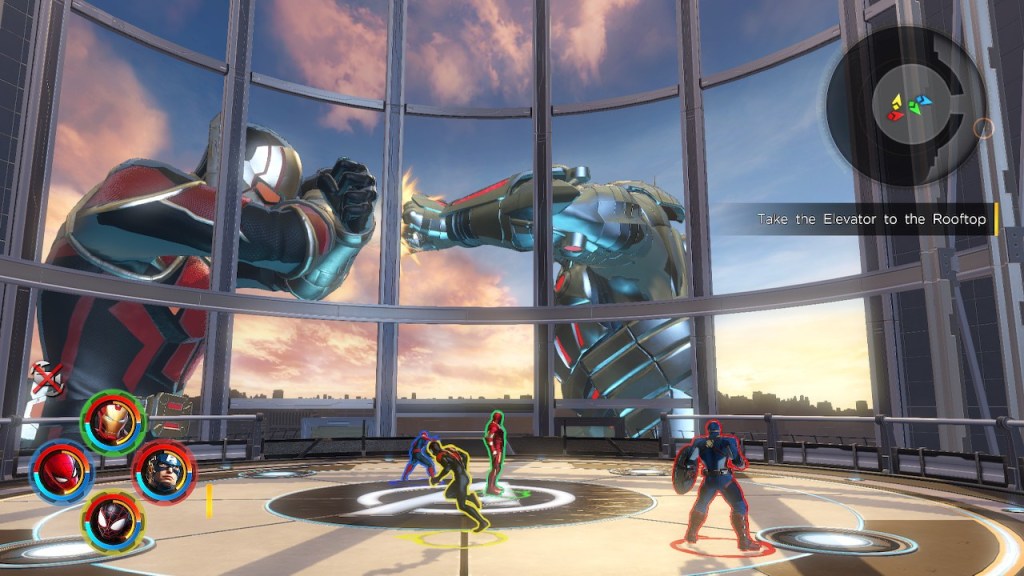 Above: The story does offer some cool moments.

You also have some more obscure characters, like the Inhumans member Crystal. It’s also nice to see Miles Morales and Spider-Gwen in the roster after coming to love those characters in Spider-Man: Into the Spiderverse. A good deal of the fun comes from just unlocking all of these heroes and trying them out.

I spent most of my time playing with my brothers and friends, so I usually had a full party of four heroes. After becoming accustomed to mostly playing multiplayer games online and reserving same-room multiplayer for fighting games like Super Smash Bros., it was nice to have to play a couch co-op game again.

Most things are more fun when you do them with your friends, but there’s something especially satisfying when you’re all playing as one of your favorite super heroes and working together to take down villains and save the world.

Similar to other action role-playing games like Diablo III, Marvel Ultimate Alliance 3 usually has a top-down camera. But while the camera in Diablo is always at the same angle and distance from the characters, the one here will move around, sometimes getting closer to the ground. It can be a mess.

The sudden camera movements can throw you off, and some boss fights have the angle so low to the ground that you can barely see anything. This made for a rough fight with Bullseye. Along with the low, faraway camera, numerous glass cases would block the view of our characters and the boss. The below screenshot from the fight happened right after I tried to defend the camera when my friends were blasting it. I had to concede their point afterward 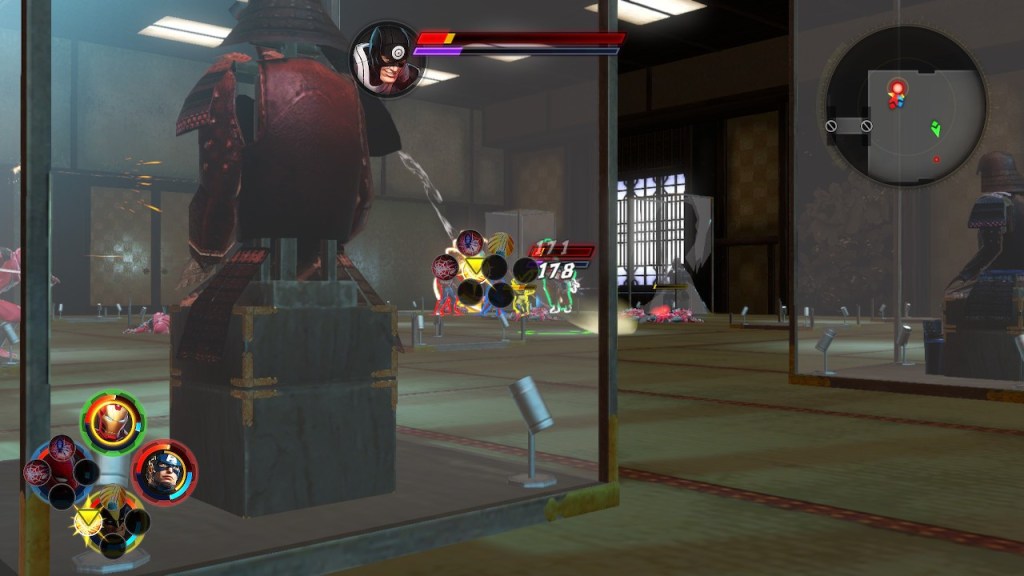 Above: An actual camera angle during a boss fight.

The interface itself is a big problem here. Much of the important information about your character, including your health and energy, is located in the bottom left corner of the screen. I would often try to sneak a peak at this information and end up losing my character in the progress.

It also has a confusing sync attack system. Basically, when you use a special move, there’s a chance that another player can push the A button to also do one of their attacks. But again, the biggest visual indicator for when you’re supposed to push the A button is on the bottom left corner of the screen. If you’re paying attention to your character on the screen, you’d have a hard time noticing the button prompt.

We eventually realized that our controllers would vibrate a bit and small lines would connect characters if a sync attack was possible, but this information would also often be lost among all the other visual clutter and combat mayhem. 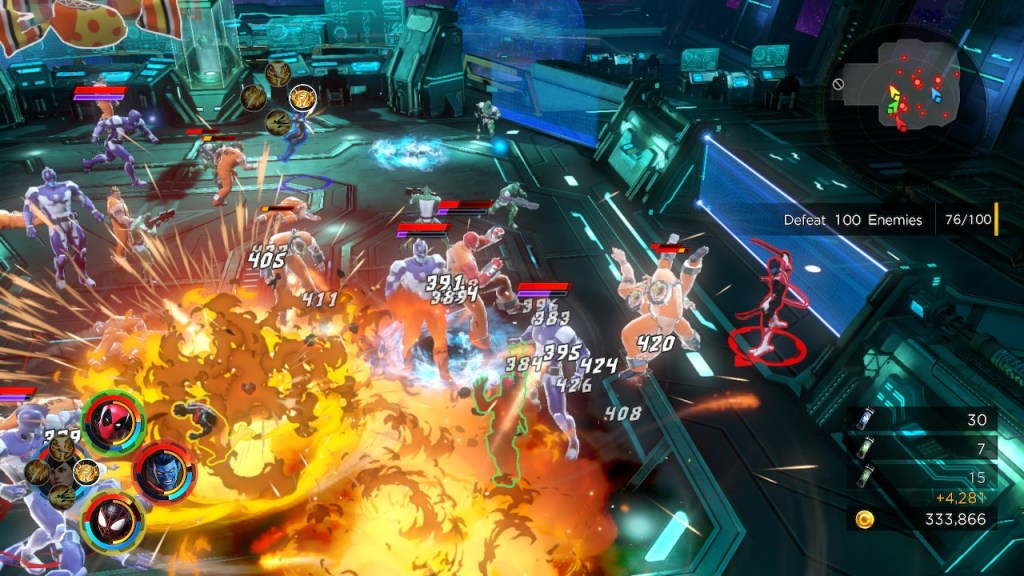 Above: It can be hard to keep track of stuff.

The MCU dictates more than just the roster. If a character in this game has an equivalent from a movie, you can expect this version to take its cues from the silver screen portrayal of the hero — and not just in appearance but tone as well.

This is what hurts the game more its other problems. Like with most Marvel movies, Marvel Ultimate Alliance 3 tries to be funny and full of quips, but the humor never lands. It makes many of the characters feel like dollar-store knockoffs of their movie counterparts. It’s also a bit of a bummer to see the game’s plot revolve around the Infinity Stones, ground that has already been covered plenty by the movies and other games like Marvel vs. Capcom: Infinite.

Marvel Ultimate Alliance 3 is fun, especially with friends. Although it’s also fine if you want to play it alone, and being able to switch between one of the four heroes at will adds another layer of depth to the experience that you’re missing in multiplayer (although that’s not enough of a trade to make the solo experience better).

And Marvel Ultimate Alliance 3 is missing depth. It’s a simple kind of beat-’em-up with only basic role-playing game mechanics. Compared to something like Diablo III, there’s little in the way of character progression or customization. And Ultimate Alliance’s annoying camera and visual clutter can make even the satisfying moments of action a bit frustrating.

It succeeds most as a tribute to Marvel. Its giant roster offers a great variety of heroes. And while the gameplay is simple, it can still be satisfying with some cool cinematic moments and boss fights that I won’t spoil for you here.

I think most people know what they’re going to get with this one: a simple Marvel-themed beat-’em-up game. Just don’t expect anything more than that.

Marvel Ultimate Alliance 3: The Black Order comes out for Switch on July 19. Nintendo sent us a code for this review.