Nintendo blows other companies out of the water when it comes to the gaming industry’s recent TV ad impressions, with 86% of all impressions for the June 16-July 15 measurement period. PlayStation takes second place with 11.1% of industry impressions.

GamesBeat has partnered with iSpot.tv, the always-on TV ad measurement and attribution company, to bring you a monthly report on TV advertising by the gaming industry. These are the ads, and by extension the games, that game makers are putting major muscle behind. Below are the top five most-seen gaming industry TV advertisers from June 16 through July 15. 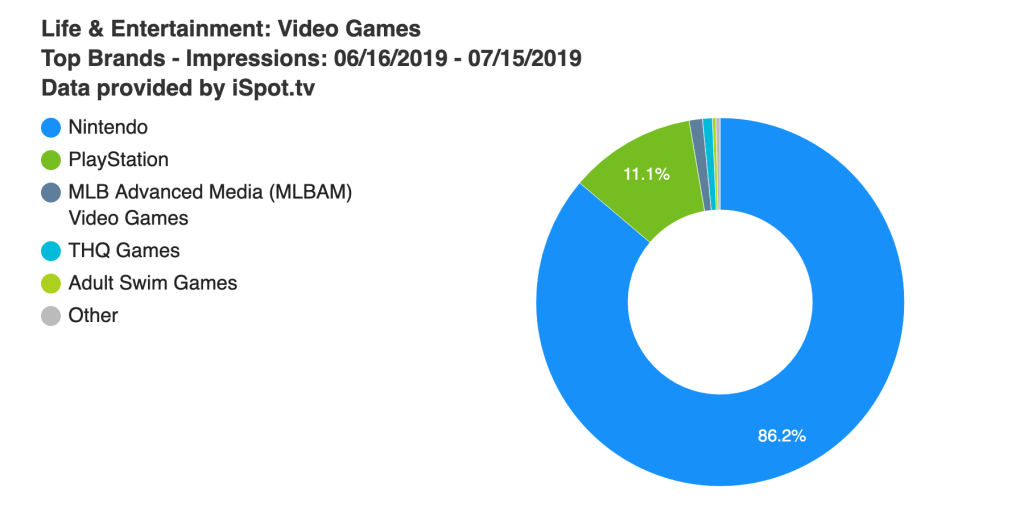 Overall, there were 561.8 million TV ad impressions during the period measured, with eight brands spending an estimated $6.1 million on 19 spots that aired over 2,800 times. Nintendo was the leader, accounting for 86% of the sector’s impressions across 30 days

Nintendo takes first place by a wide margin with 484.2 million TV ad impressions generated by 10 spots that aired 2,700 times. Its most-seen ad was “Level of Your Dreams” with 208.1 million impressions. Disney Channel, Nick, and Nick Toons were three of the top impressions-generating networks for Nintendo, while top shows included SpongeBob SquarePants, The Loud House, and Big City Greens.

No. 2 goes to PlayStation with 62.4 million impressions generated by two commercials that aired 92 times. “Epic” was its most-seen spot with 49.3 million impressions. Top networks for PlayStation included ESPN, truTV, and ESPNEWS, while specific programming that racked up high impression-counts included SportsCenter, the 2019 NBA Draft, and MLB Baseball.

MLB Advanced Media (MLBAM) Video Games takes third place with 6.5 million impressions generated by two spots that ran 19 times. The ad with the most exposure was “Take the Field,” with 5.3 million impressions. MLB Network, Cartoon Network, and Freeform were among the networks that generated high impressions for the company, while top programming included Quick Pitch, MLB Baseball, and Craig of the Creek.

At No. 4: THQ games, which aired a single ad, “All You,” 54 times, resulting in 4.8 million impressions. NBC Sports, NBC, and MavTV were three of the top networks for the campaign, while Motocross Racing, Motorcycle Racing, and Dew Tour were among the programming that generated high impression-counts.

Adult Swim Games rounds out the ranking with 1.7 million impressions generated by one ad, “Pool Panic: Acting Up,” that aired six times, solely on, yes, Adult Swim. The three programs that generated the most impressions for the commercial were Rick and Morty, Bob’s Burgers, and American Dad.