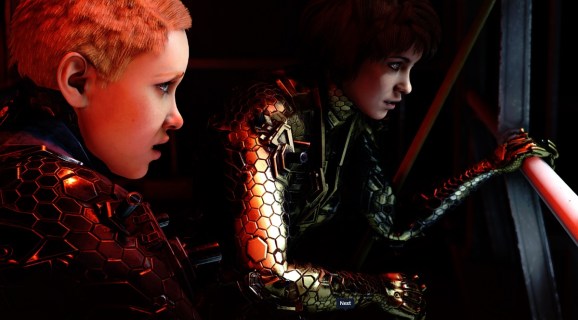 Sophia (left) and Jessica are the daughters of BJ Blazkowicz in Wolfenstein: Youngblood.

During an early scene in Wolfenstein: Youngblood, an elderly Anya scolds her daughter for giving up in the middle of a workout. She explains that some Nazi will push through the pain one second longer, and that’s when they kill you. That is when they win. Overwhelmed, Zofia “Soph” Blazkowicz, asks her mother when the fighting will end. The question lingers, but players will know that the answer is that doesn’t. You fight long enough to teach your kids to fight.

And that is what Youngblood is about. It takes place about 18 years after Wolfenstein: The New Colossus. Players take control of one of the two Blazkowicz kids that fans were promised after spending the entire last game with a pregnant Anya. Now as teenagers, Soph and Jes must follow in their father’s Nazi-killing footsteps.

You get to choose which sister you want to play as, and then you can go online and play the entire game in cooperative online multiplayer. This is a first for the series, and it’s definitely where developer Machine Games put its focus. But does this work? And does the game live up to its recent, excellent predecessors?

The Wolfenstein series is the rare video game franchise where I care about the characters above everything else (Saints Row is the other). But I’ve been with B.J. through two games now, and I adore him and his supporting crew.

Through my time with Youngblood so far, Machine Games retained that key element. Jes and Soph are delightful. The characters have great chemistry where they play off one another and point out each other’s anxieties.

An early scene highlights this when the twins kill their first Nazi. B.J. Blazkowicz is the most famous Nazi-killer of all time, and the girls feel like they have to live up to that legacy. But when it comes time to finally do the deed, they are both scared. But they also encourage one another. The resulting kill is both extremely violent and funny — and it leaves the characters laughing and crying simultaneously.

This moment is endearing, and the credit for that should go both to the writing and the voice acting.

The shooting and traversal is better than ever

If The New Colossus had a weakness, it was the gunplay. Weapons lacked a sense of danger and power. You really were just pointing at enemies and clicking, and it was never really entertaining.

That has changed in Youngblood. Guns feel strong and precise. It’s a combination of the sound design, the animation, and the recoil that make it all come together.

Getting around the world is also the best Wolfenstein has ever felt. You start with a double jump that feels almost like it’s out of Destiny 2, and that’s high praise.

The Wolfensteins from Machine Games have a big focus on upgrading weapons, and this version is greatly expanding that concept. You can improve individual components on each gun to get better characteristics. This should give you reasons to keep returning to the game with friends even if you’ve already played previous levels.

No pausing even when in single-player

I get that this is primarily an online game. When you are playing in single-player, you are actually just hosting a game and waiting for someone to join. You can prevent anyone from joining you, but even if you do, you can’t pause the world.

This means the action continues around you even if you’re digging through the settings menu. As someone with young kids who do not respect the concept of daddy’s Nazi-killing time quite yet, this is very frustrating.

I’m going to spend a lot more time with Youngblood over the next couple of days. I still haven’t played it with another human, and that is the whole point of the game. Once I’ve done that, I’ll return with a finished review.

For now, however, know that this is a worthy entry in the Wolfenstein series. I hope that we get a lot more from these characters because they are so dang cool. And I hope the upgrade path continues to feel rewarding. We’ll see.

Wolfenstein: Youngblood is available now on PC and tomorrow, Friday July 25 on consoles. Bethesda provided us with a review code for the purpose of this review.