With Netflix’s Stranger Things back in the pop culture zeitgeist, 1980s nostalgia is surging again. At first, it seems like Knights and Bikes — where children stumble upon a supernatural phenomenon — is riding that trend as well. But indie developer Foam Sword has a different take on the usual pre-Internet coming-of-age story.

Heading to PlayStation 4 and PC later this summer under the Double Fine Presents publishing label, Knights and Bikes is an action-adventure game about two young girls named Demelza and Nessa. The year is 1987, and Nessa has just arrived in Demelza’s home of Penfurzy, a fictional English island. After becoming fast friends, the children decide to investigate an old Penfurzy legend about finding long lost treasure.

You can play as the girls either by yourself (swapping between them while an AI takes over for the other kid) or with a friend in local and online co-op. Each character has specific abilities that’ll help you fight enemies and solve puzzles, such as Nessa’s disc-throwing attacks and Demelza’s wellies (boots she can use to kick through puddles and stomp on bad guys).

And as implied in the title, both girls find bicycles that help them get around Penfurzy.

“We’re trying to have that sort of adventure you get as a kid, where you go on vacation and you meet a new friend and you instantly go on an adventure together and get up to all kinds of mischief,” said artist and designer Rex Crowle in an interview with GamesBeat.

From a kid’s POV

While you’ll find some references to ’80s pop culture in Knights and Bikes (such as retro gaming consoles, laser tag, and a knock-off version of He-Man), Foam Sword deliberately avoided using well-worn tropes like neon lights or brightly colored spandex. The island is a mostly rural and somewhat rundown place with scrapyards, a mini-golf course, and a sleepy harbor town.

Much of this comes from Crowle’s early childhood experiences in the county of Cornwall, which is on the southern tip of the U.K. Penfurzy is a stylized re-creation of his hometown.

“I felt that because this is a very natural, very rural, slightly cutoff location, it shouldn’t go super strong on the eighties influence,” said Crowle. “So it’s a little bit more nuanced. … If you live somewhere that’s not right in the center of pop culture, it takes like 10 years for things to filter through. I think a lot of my childhood in the ’80s was actually more like the ’70s.” 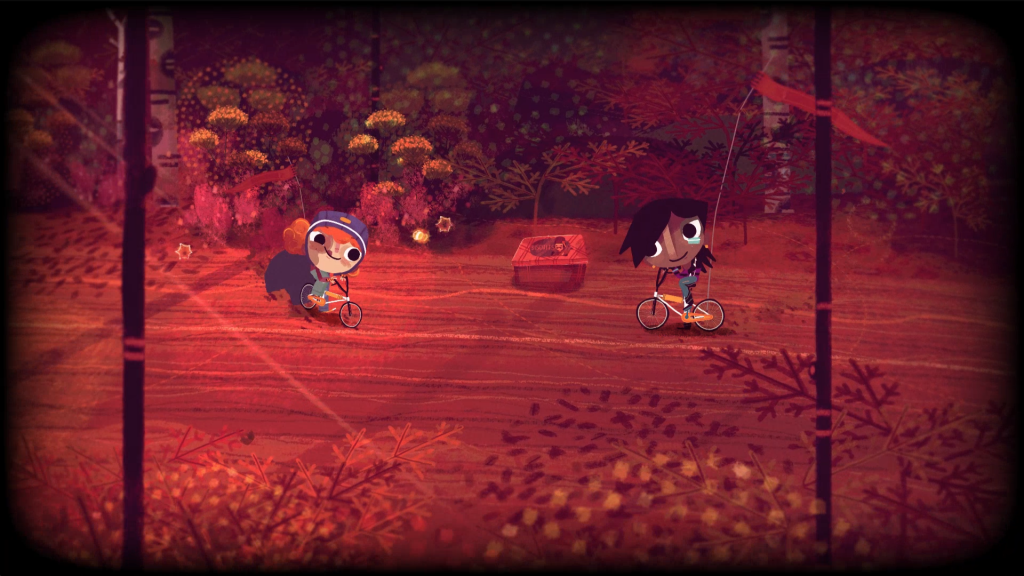 Above: Demelza (left) and Nessa riding on their bikes.

The other half of Foam Sword, programmer Moo Yu, grew up on the other side of the world in Anaheim, California — under “the shadow of Disneyland,” as Crowle put it. That’s why Penfurzy is also the home of what was once a bustling theme park. It’s one of a few small attractions that suffered as tourism on the island declined over the years. The local economy is so dire that some residents (including Demelza and her dad) are being evicted from their homes.

Add to that the recent passing of Demelza’s mother, and it’s quite a dark time for the young orange-haired girl, who turns to games and comic books for comfort. But things start to change when she meets Nessa. The excitement of having a new friend finally pulls Demelza out of her room, giving her a reason to go on a real-life adventure.

Though Penfurzy isn’t as busy as it used to be, the kids find ways to make their own fun. You’ll hear Demelza make cute engine noises whenever she breaks into a run. If one of them is defeated in battle, they just have to high-five each other to get back up. From time to time, they’ll challenge each other to races. And since they’re too young to have cash or credit cards, Demelza and Nessa just collect whatever they find (like shells, stones, and bugs) as currency for upgrading their bikes.

Even the hand-painted art style is a reflection of that childhood curiosity.

“[Knights and Bikes] is drawn with the kind of materials that kids would have, like crayons and chalk. I mean, I don’t want it to just look like they just drew it. But it’s got that kind of atmosphere, that element,” said Crowle. “And that really helps to add things onto the landscape that they’re actually imagining. We can quite easily draw extra details.” 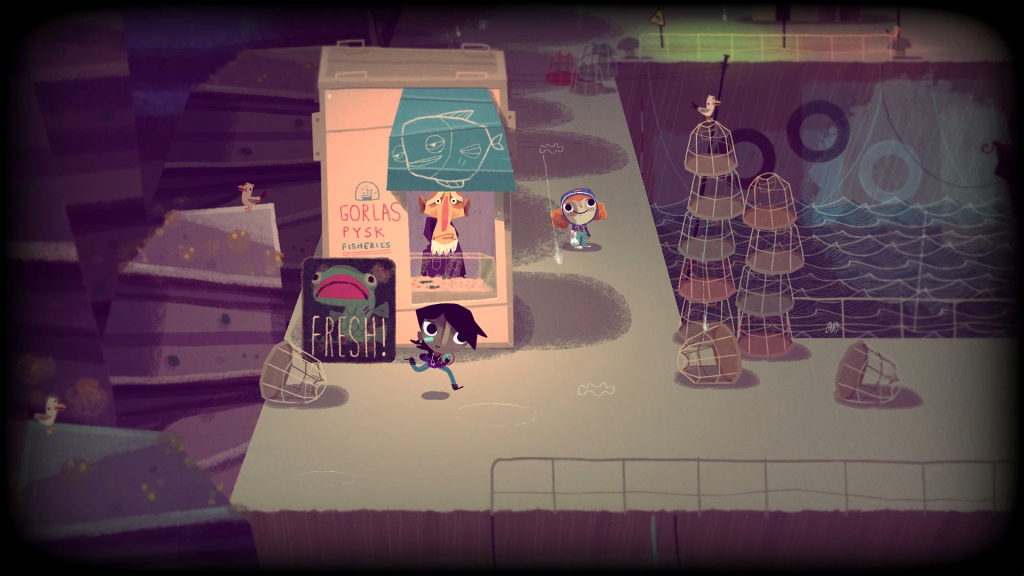 Above: The girls explore the other side of town.

The children’s overactive imaginations play a big part in the story, especially as they dig deeper into the old legend. At one point in the demo, Demelza was bored of knocking over practice targets in the golf course, so naturally, the red targets sprouted hands and legs and started to run away from her. But the most surprising thing for Demelza was that Nessa can see all this happening, too.

Penfurzy only becomes more fanciful when the girls unwittingly trigger an ancient curse that spreads across the island. Suddenly, you’re not fighting ordinary objects anymore. One enemy type that appears later in the game is a possessed metal gauntlet; but when you defeat it, it just turns into a pile of tin cans. Part of the fun of Knights and Bikes is figuring which of these elements are real and come from the curse, and which are just manifestations of the girls’ imaginations.

“We play a lot with what’s actually here in the environment and what’s being augmented and added onto it by the kids’ own imaginations,” said Crowle.

Back to the drawing board

For Crowle, Knights and Bikes came out of a desire to get his hands “really dirty” again. Before co-founding Foam Sword with Yu, he was at the Sony-owned Media Molecule, where he worked on the LittleBigPlanet franchise, Tearaway (as the lead creator), and Dreams. While he enjoyed his time at the studio, he said it’d been too long since he could just sit down and doodle.

“I hadn’t been necessarily drawing that much for the previous five years, and I felt that it would be nice to have a hobby project,” said Crowle. “[Knights and Bikes] was very much about, ‘Can you just hand-paint a whole world? And what would that look like?’ That was the starting point, really.”

With ‘80s classic The Goonies on their minds, Crowle and Yu (also a former Media Molecule employee) initially wanted to create a role-playing game that’d follow a group of kids. But they scrapped that idea because the cast felt too stereotypical. The developers changed the style and genre of the game, choosing to focus on just two characters instead. 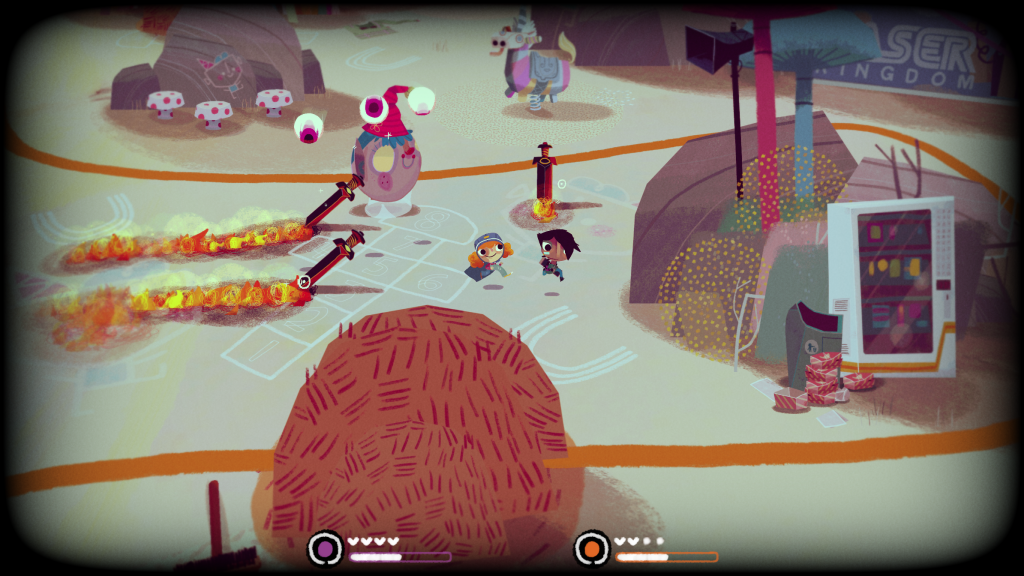 Above: The curse unleashes new types of enemies.

They worked slowly on Knights and Bikes at first, with Crowle chipping away at it while still working a few days a week at Media Molecule. After a successful Kickstarter crowdfunding campaign in 2016, he realized that he needed to turn his hobby project into a full-time gig, so he left the studio later that year.

Yet it’s hard to deny the influence that his time at Media Molecule has had on his work. Both LittleBigPlanet and Tearaway used ordinary items like buttons, fabrics, and slivers of paper to tell extraordinary adventures — much like the everyday objects Demelza and Nessa collect on their journey. Knights and Bikes seems to represent another branch of that imaginative family tree.

But after years of making colorful games that exude positivity and friendship, Crowle is thinking of heading in a different direction with his next project.

“I’m really desperate to make a really gritty, violent game. I feel like I’ve done too much whimsy now,” he said jokingly.