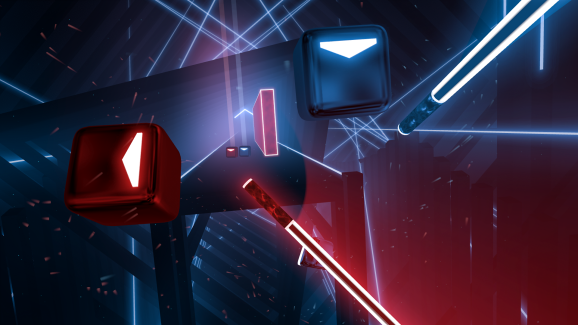 Yes, I did play Beat Saber while singing, "Luke, Be a Jedi Tonight ..."

As promised, three new tracks for Beat Saber have arrived this week, and they look insane.

The free tracks are all from Camellia: “Crystallized,” “Cycle Hit,” and the wonderfully titled “What the Cat!?” You can see a brief clip of the latter song in the tweet below. We like to think of ourselves as pretty capable Beat Saber players but … this might be a bit much. Just take a look for yourself.

A few weeks back, Beat Games teased its hardest song yet, and this might well be it. And it released on the second hottest day ever in the U.K. Thanks, Beat Games! The update should already be available for everyone playing on Quest, PSVR, and PC VR.

That’s far from all that’s on the way for Beat Saber fans, though. We’re still waiting for news on the game’s official third content pack, which should add around 10 new songs for around $9.99. Back at E3 we also got our first taste of 360 degree levels, which are on the way to Oculus Quest. No dates for those just yet, either. Finally, Beat Games CEO Jaroslev Beck recently stepped down from his role to double down on music for the game.

Pair those with more surprise releases and there won’t be any reason to stop slicing beats any time soon.