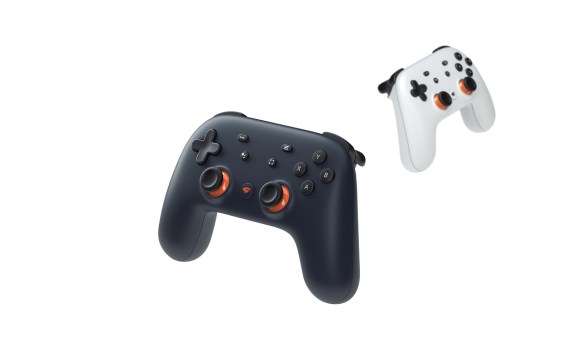 Google has a few colors for its Stadia controllers.

Apple Arcade and Google Stadia are enticing options for developers. Once a game is accepted, they’re off the hook for all those expensive UA campaigns and guaranteed some kind of a fee or revenue source. In other words, they can spend their time doing what they love to do best: create games.

But participation in the subscription services raises many questions for developers and the industry. Let’s look at a few.

Subscription vs. the app stores

It will be interesting to see how Apple positions its App Store via a vis Apple Arcade. For instance, given its emphasis on service-based revenue, will Apple attempt to make Arcade more premium than the App Store? Or will the opposite be true, meaning the better games are reserved for the App Store?

And what will happen if a game developer is wildly successful with the subscription service … will it opt to leave the service and launch its own, as Disney so chose when it opted to leave Netflix? If so it will lead to further fragmentation in the market, and that leads one to ask: how many subscriptions can we reasonably expect consumers to pay? Xbox and Ubisoft already offer a subscription service and one wonders how many the market will support.

To play or not to play in the subscription services

We’ve seen indications that the subscription services may demand exclusivity, meaning if Apple Arcade offers a game, it can’t be available on any other platform or in an app stores. If exclusivity becomes the standard, developers will need to decide how to best monetize existing and future games.

In other words, do you want your latest game featured in, say, Apple Arcade, which means that only players who pay Apple a subscription fee can play it? Or would you prefer to offer it in the App Stores, where it can be free to all players and supported by ads and in-app purchases? I see this as a potential dilemma for publishers: What do you bet on, subscriptions or advertising and IAP?

If you bet on a subscription, you’re essentially betting on Apple and Google. Let’s be clear about what that bet entails: you’re turning control over your game — along with your most important customers — to one of these companies. All businesses seek to maintain relationships with their best customers. In addition to their loyalty, the biggest spenders provide insight into the types of products and services they’d like to see from the brand. In the case of game developers, IAP whales are the best customers, so in a sense, a subscription model means turning over your direct relationships with them to Apple or Google.

Second, we can note that whales are just one part of the monetization strategy, as most use ads. But the whales are pretty important to the developers.

Third, we can add that in any business, the best customers are important. In this case, the IAP whales are the game developer’s best customers, so in a sense, a subscription model means turning over your best customers.

That raises another question: The general feedback we’ve heard from companies we work with is that Apple will offer developers a one-time fee for their games. If true, will those developers stay motivated to improve gameplay on a continuous basis to keep users engaged as they are now? Will publishers even care about user engagement and retention once they’ve turned over their games to a subscription provider and they’ve made all the money they can for their effort? Will the subscription services step up to that role?

At this point, we don’t have a clear insight into the criteria for game acceptance into Google Stadia and Apple Arcade, which means publishers may have a difficult time deciding how or where to sell their games.

Where does the gameplayer fit in all of this? If the services require exclusivity, how many will spring for multiple subscriptions? I suspect that in the end, consumers will be the ones who drive how this all plays out. If Apple, Google, and others all build services that no one subscribes to, game developers will stick with the App Stores.

Finally, what becomes of advertising, which actually offers many (though perhaps non-intuitive) benefits? Let’s start with game economics. In my opinion, some consumers who won’t buy in-app have plenty of ways to access the gems, gold coins, tickets or whatever virtual currency they need to advance in a game. If those incentives go away, are they just as invested in the game? If you remove all barriers to gameplay, is it as fun?  Some may like it, some may not.

Another question concerns advertisers. In most cases, it’s other developers who advertise in mobile games, which means players are constantly exposed to new options. This cycle keeps the entire ecosystem fresh and vibrant. Will that be lost should all games move to a subscription service?

Finally, there’s a question for the larger ad-tech sector that currently supports the game developer’s advertising: What happens to all that expertise and investments that have gone into advertising and game optimization? Over the past decade we’ve seen hundreds of mobile ad networks, mediation platforms, agencies and tech companies come into being with the express purpose of helping game developers find new users. Will that expertise fall by the wayside or be redeployed somewhere else?

In short, the subscriptions offer many obvious benefits to developers and gamers, but there is the potential for some unexpected outcomes that they’ll need to think about.