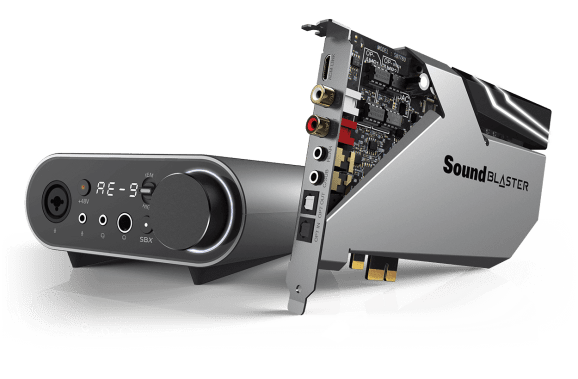 The Sound Blaster AE-9 and its breakout box.

Sound cards are not a component that most people think about when building or upgrading a PC. You settle for your motherboard’s built-in sound card because you can get HDMI sound out of a video card or USB sound from a dedicated headset. But for anyone who wants the absolute best possible audio from their PC, the discrete Sound Blaster AE-9 from Creative is an excellent choice.

The AE-9 is shipping now from Creative for $350. That’s a lot of money, but it comes packed with features to justify that price. And as someone who makes videos, it’s also turned into one of my most useful tools.

The first reason to get a Sound Blaster AE-9 card is your love of audio. This device includes an ESS Technology digital-to-analog converter with a 129Db dynamic range. It supports up to 32-bit audio and encoders like Dolby Audio and DTS Connect. Creative also included its own Xamp that sends a separate power signal to the left and right headphone channels.

Unsurprisingly, all these gizmos help create sound that is loud and full with little-to-no distortion. The AE-9 is going to get the absolute best out of any decent headphones or speakers. On a track like Massive Attack’s “Angel,” the bass will boom and rumble without rattling like a subwoofer in the back of a cheap Camry. But that bass won’t overwhelm the popping cracks of the percussion.

That translates into gaming where intense combat sequences can often muddy the sound of headphones and speakers. Creative’s AE-9 has the power the accuracy to distinguish between every weapon and voice during a firefight. And then in quiet moments, you get every little detail and subtlety of the sound design. In a level like Sigil in Hitman 2, even the quiet can feel overwhelming with the blowing ocean breeze, crashing waves, and large murmuring crowds.

Along with the top-notch hardware, you also get Creative’s excellent sound-processing software. The company has spent years improving its tech, and you can take full advantage of that with the press of a button or in the Sound Blaster Commander software. While everything sounds great in “Direct mode” with no processing, you can boost some lower-quality audio sources with this SBX feature. I like it for YouTube, in particular, which is never better than an over-compressed stereo signal. SBX can give make music and other content on YouTube sound more robust and alive.

Regardless of what you’re listening to, the AE-9 has the capability to blow you away. It’s wiping the interior walls of my cranium with my brain’s gray matter right now, and I love it.

One of the big reasons that the AE-9 is going to end up easily worth $350 for many people is because of its breakout box. This device connects directly to the internal sound card and provides you with an easy way to control your audio.

It has a big knob to easily adjust your volume level. You can also long-press the volume knob to switch between headphones and speakers. The breakout box also has a switch for headphone impedance. You can switch between IEM (in-ear monitors), Normal (headphones), and High (high-impedance headphones). This helps you quickly ensure you are getting the most from your headphones without having to go into software to ensure you don’t blow out their speakers.

The box also has the previously mentioned SBX button as well as a +48V Phantom power button. Again, these are about quickly empowering you to turn features on and off without having to go into the Commander app. With SBX, you can activate or deactivate your current sound profile. The +48V option enables you to give power to an XLR microphone.

Speaking of XLR, that’s just one of the many extra ports on the breakout box and the card itself. I love having the XLR port because it enables me to plug a mic like the AT2020 from Audio Technica without also requiring an additional, dedicated audio interface.

Audio professionals are likely still going to want their interfaces for recording, but the AE-9 is enough for me when I want to create podcasts or YouTube videos. And it’s significantly better than any of the USB microphones I’ve used. Having XLR is such a huge benefit for anyone who is thinking about upping their audio quality for online content.

But the breakout box also has inputs for 6.35mm and 3.5mm microphone and headphone jacks. Then on the card itself, you also have optical in/out and then all of the connectors for a surround-sound speaker system.

The biggest issue I encountered with the AE-9 was the installation. The breakout box requires extra power, so you need to connect a 6-pin power cable to the card. But chances are that if you are buying a $350 sound card, you probably also have a power hungry GPU as well. You may not have an extra 6-pin laying around.

I used a Molex-to-6-pin adapter, which connects two Molex power connectors to one 6-pin. I asked Creative, and it said this will work fine. But the point is that you are likely going to have to figure out a way to get another 6-pin from your PSU up to your sound card. And for many people, that could prove difficult.

The only other issue is that the AE-9 doesn’t have any internal mic monitoring. This feels like a major oversight, but it’s also something I’ve grown frustrated with across the board when it comes to PC microphones. I like monitoring because I want to hear my voice as I’m speaking to ensure that everything sounds decent. At the same time, I don’t want any noticeable delay because the echo makes it difficult to concentrate on what you’re saying.

Unfortunately, the AE-9 only has a “listen to this mic” feature which introduces enough of a lag that I could never use it when actually trying to create audio content. But it’s not like other microphones get this right. Even mics with latency-free monitors have issues with connecting gain and volume to your monitoring level so it’s impossible to hear yourself while also ensuring that your game sound won’t blow your ears off your head.

The AE-9 is an all-around great device, and you can what you pay for. Many of you probably don’t need a $350 sound card, but it’s definitely something I would consider if you are looking to improve the immersive quality of your gaming and media. And it’s especially worth the price if you want to upgrade from a USB mic like the Blue Yeti to an XLR mic instead.

I highly and enthusiastically recommend it. It’s one of those devices that is great at what it’s trying to do while also solving problems and eliminating the need for other devices.

Creative Sound Blaster AE-9 is available now for $350. Creative provided a sample unit to GamesBeat for the purpose of this review.