Last fall, Blizzard Entertainment announced the beginning of open qualification tournaments for its popular digital card game. No longer is grinding up to Legend rank and beyond the only way to get into Hearthstone esports; now anyone can compete in online Masters Qualifiers from anywhere, and if they do well, advance to three major in-person Masters Tour events. The first was in Las Vegas this June; the second is August 16 to August 18 in Seoul (local time).

Grandmasters, the best 16 players in the world in each region, got automatic invites to those events and other online-only competitions with each other, requiring less travel and giving them more opportunities to focus on their own streaming and brands. (Francisco “PNC” Leimontas, Kim “Surrender” Jung-soo, and Chris “Fenomeno” Tsakopoulos took home the top prizes in the Americas, Asia-Pacific and European regions this past Sunday for Grandmasters Season 1.)

On May 15, Blizzard changed course again, tweaking how Masters Qualifiers would work. Qualifiers moved to happening half as often and qualifying twice as many people, and some of the tournaments moved from Swiss style to single-elimination. Players who never win, but consistently place in the top eight, now get an invite to the major in-person events.

As a result, hundreds of tournaments seeded tens of thousands of players into Masters Tour competition.

GamesBeat talked with Sam Braithwaite, senior global esports franchise lead for Hearthstone, who explained the reasons for the changes — and why more are on the way. This is an edited transcript of our interviews. 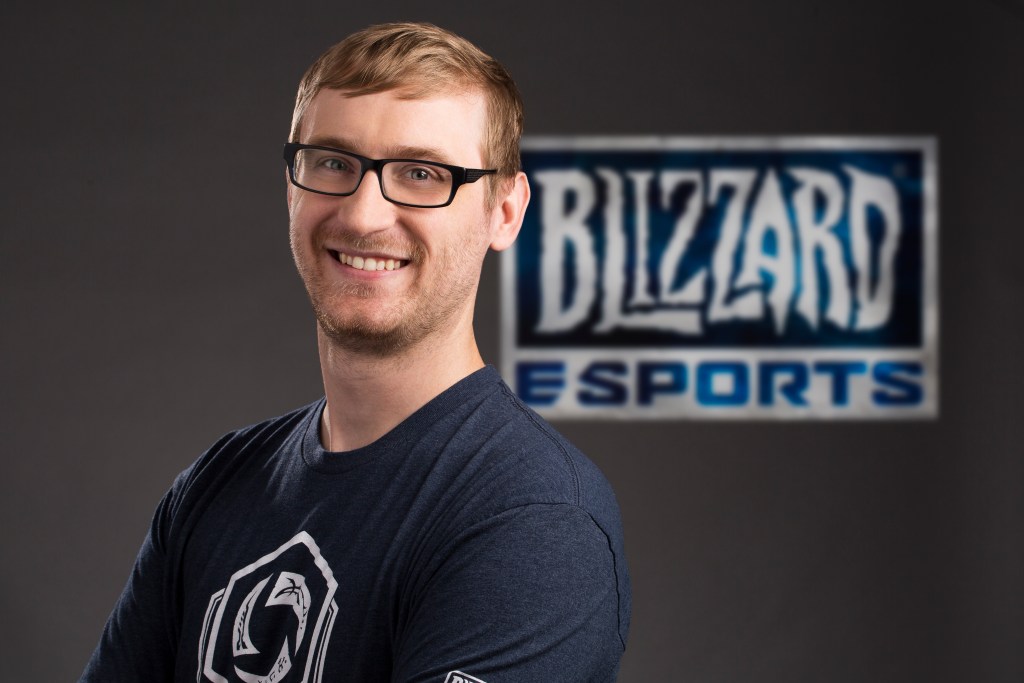 Above: Sam Braithwaite is lead for global esports for Hearthstone.

GamesBeat: What were some of the problems you saw in the Masters system?

Sam Braithwaite: We’ve gotten some criticisms that with the Specialist format we’re starting to see some really long series and some really long games. With the launch of the new expansion, Rise of Shadows, we see with the Control Warrior matchup, our internal round times significantly increased. There are specific match ups in a Swiss online tournament that will make it so that everybody else is sitting around and waiting. And that’s unfortunate.

GamesBeat: Why tweak tournaments rather than ban match-lengthening cards like Archivist Elysiana?

Braithwaite: We wouldn’t be banning cards in competitive play. I think there’s one card that’s banned, that’s Whizbang, and the reason why is because it puts you at a competitive disadvantage not knowing what the cards are in your opponent’s deck.

This issue is exacerbated by the fact that it [was] Swiss, to where if you have 200 people that are competing, everybody else finishes their game, but you and I are playing Control warrior, we all have to sit and wait for our round to finish so that everybody can start the next round of competition.

GamesBeat: What solutions have you considered?

Braithwaite: Reducing the amount of people in the tournament. Changing it from Swiss to single elimination. Those are the types of things that we look at as possible solutions, but our hope [was] that this is something that is just going to be fixed organically through people figuring out how to beat it.

GamesBeat: Why switch to Specialist format from the old three-deck, any-hero-goes style?

Braithwaite: We made the change from Conquest to Specialist for two major reasons. The first is, Conquest and Last Hero Standing as formats are very daunting and hard to approach as somebody that is an average player. The reality is that you have to have four to five competitively viable decks from four to five different classes. That is very expensive to do to compete at the highest level of Hearthstone. That made it very nearly impossible for a lot of players to be able to compete in a lot of these tournaments.

By moving to the Specialist format, we basically wanted to open the floodgates and said anybody can compete in competitive Hearthstone. Yet the format still allows people to express creativity, deck building, adaptation and changing from game to game.

With all of this in mind, we want to make sure that not only is the format accessible, but it is fun to play and watch. We may make changes and evolve the format to ensure we are providing the best experience for our players and the community.

Getting into the queue

GamesBeat: How has attendance been for the new online qualifiers?

Braithwaite: What we’ve seen is that every single Masters Qualifier, with the exception of one to two on really weird time zones, has reached maximum capacity — and not only that, but we have a waitlist of somewhere between 100 to 400 people for each of these tournaments.

A massive amount of people are competing in these tournaments on a regular basis. And that’s awesome. And that’s what we hope to achieve with all of this. 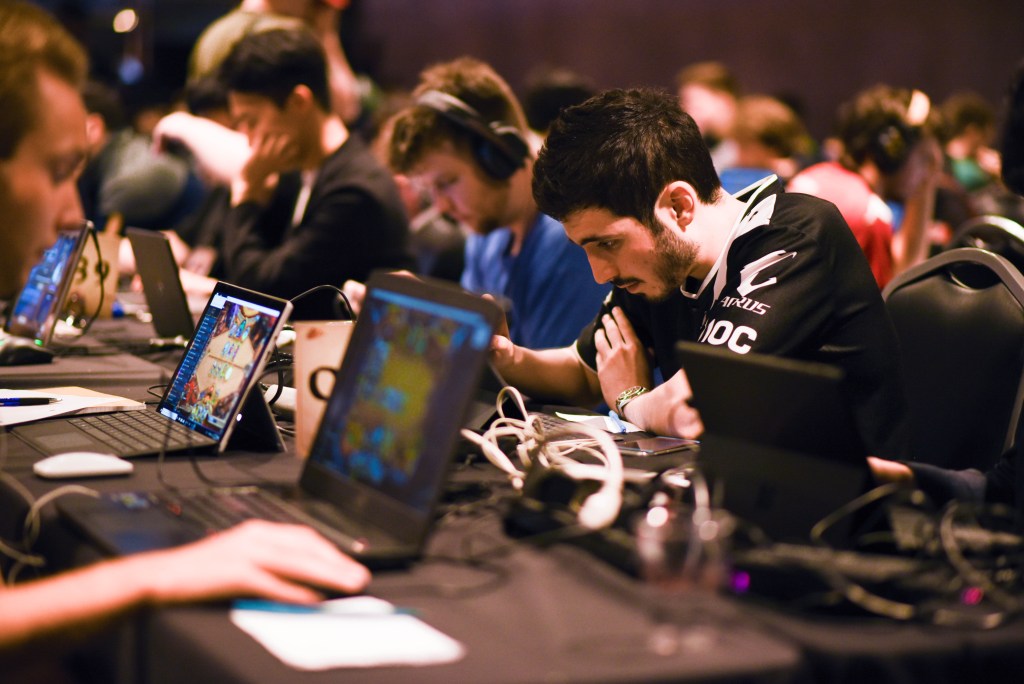 Above: Competitors duke it out in the hectic early rounds of the Masters Tournament in Las Vegas.

GamesBeat: How does the increased participation in the qualifiers help the game?

GamesBeat: How many players in the tournaments are repeats?

GamesBeat: Are most players 1-and-done, or do most repeat?

Braithwaite: It is more likely that somebody plays in more than one tournament then stops after their first tournament.

So people are enjoying these. They’re having a good time. There’s actually this really cool community that’s actually being built around them in Discord with all of our player qualifiers. And people are starting to have all these practice partners, they’re starting to experiment with their decks together, with the Specialist format. And it’s building this cool community, which we really like.

GamesBeat: Are additional folks participating as a result of this structure?

Braithwaite: We already have more people participating in Masters Qualifiers than participated in HCT.

Braithwaite: The majority of all of our tournaments are online. Some criticism we get regarding them is accessibility for people around the world. If we look at our first Masters Tour event, it takes place in Las Vegas, which is awesome and easy for people living in the United States of America.

But what if you live in Brazil? What if you live in Australia? Or Russia? That creates this burden to where, “Yeah, I qualified, but now I’ve got to spend $1,500 in order to get there. And if I lose in the first round of the tournament, then I’ve actually lost money going to this event.”

GamesBeat: How do you solve that problem?

Braithwaite: People have to understand that going into it. And you have to hedge your odds, and you have to bet against yourself and whether or not you think you’re going to do it. But there’s this ideal world which we’re building to as a team, which is strong collaborations with third parties.

But now with the new Master Tour events, we have something that we can offer third parties, which is, “Here’s an invitation to our Masters Tour event.”

Braithwaite: So if I’m a tournament organizer in Brazil, and I want to do a tournament in Brazil for local fans in a live onsite thing, they can then reach out to us. We say, “Yeah, of course we’ll give you guys a Master Tour invite, but players have to have a flight and hotel provided to them.”

So then, now we’re creating opportunities for people all around the world. People are now hosting and creating Hearthstone tournaments, which we of course want because they’re engaging with our fans. And now our fans have an opportunity to fly and compete without it being at cost to them.

[For an example, see the Battleriff Pro Legends Summer Series, which will seed players into the Masters Tour in finals competition in September; Season 5 competition starts next week. –Ed.]

That’s the direction that we want to go. And we think that that creates a really cool ecosystem. Because obviously we can’t cover 350 flights and hotels for everybody. We’re already doing the production, the prize pool, it’s a lot. GamesBeat: You had the Hearthstone Masters Bundle on sale this summer that raised funds for Masters competition …

Braithwaite: Yeah. But that’s actually the second prong of our approach. Right? So it’s great that you brought that up. If the issue is these things are hard to get to, our first answer is going to be, “Okay, collaboration with third parties.” Now the second option is, “Well, if there’s more money in the prize pool and the prize pool spread is distributed a little bit more equally, then the amount of money that’s at risk by you is no longer that dramatic.”

GamesBeat: So you’re a little bit more likely to make your travel expenses back.

Braithwaite: Yeah. And so our goal would be if you make it through the first day, 50% of the competition, that you’ve already made your money back and it’s just profit at that point.

Braithwaite: Our focus on that event [was] not audience-facing spectacle. If we look at our seasonal championships, world championship, there’s a live audience, it’s a spectator interface. But there’s a new reality that we’re facing which is rather than 16 players, we have 350 people in a giant ballroom.

GamesBeat: I was just waiting for “Sarah from Poughkeepsie” to knock Muzzy out of competition …

GamesBeat: Watch out, everyone.

Braithwaite: That’s the dream. I would love that. I would absolutely love that.