Four months after the Khronos Group debuted a provisional OpenXR specification for AR and VR platforms, seeking industry input, it’s kicking off Siggraph today with the official release of OpenXR 1.0 — an open, royalty-free, cross-platform standard supported by major hardware and software companies. The specification will enable extended reality applications to run with less device-specific customized code across multiple platforms, including those from Epic Games, Microsoft, Oculus, and Varjo, while enjoying the benefits of hardware acceleration.

Since the provisional standard was released in March, the group improved OpenXR’s input subsystem, game engine editor support, and loader based on developer feedback. Finalizing the specification means that all future releases of OpenXR will guarantee backward compatibility from the new version, enabling software developers and hardware makers to rely on a firm foundation of features. 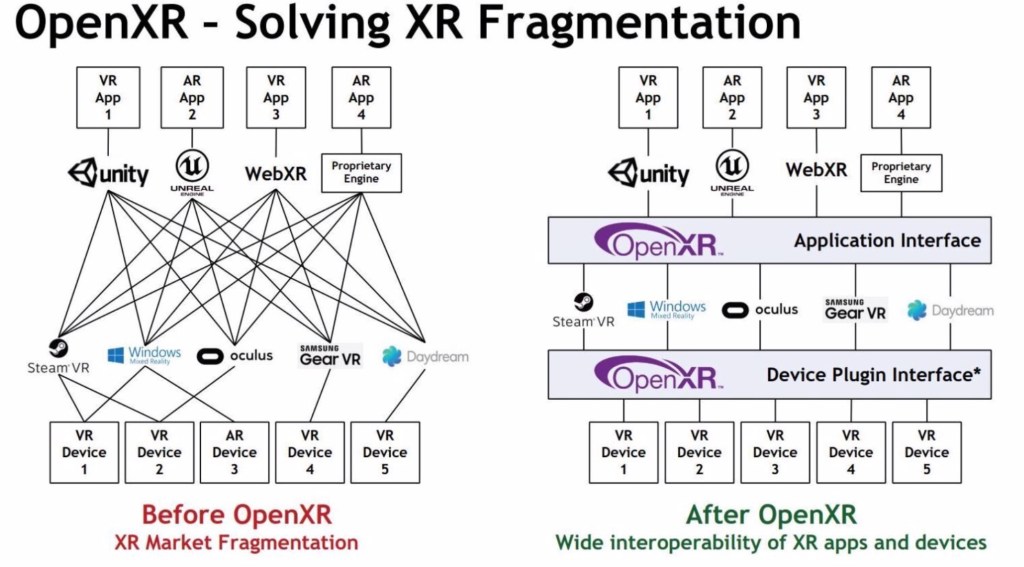 “Our work continues as we now finalize a comprehensive test suite, integrate key game engine support, and plan the next set of features to evolve a truly vibrant, cross-platform standard for XR platforms and devices,” said OpenXR working group chair and lead Intel XR architect Brent Insko. “Now is the time for software developers to start putting OpenXR to work.”

On the hardware side, Microsoft is supporting OpenXR for Windows Mixed Reality headsets, Oculus will back it on both the Rift and Quest platforms, and Varjo will support it on its high-resolution headset. Epic will be including OpenXR 1.0 support in Unreal Engine, while Collabora will have an OpenXR open source implementation. Other supporters of the initiative include AMD, ARM, HTC, Nvidia, Tobii, and Valve.

Developers interested in checking out OpenXR 1.0 can find the specification today on Khronos’ website and on GitHub. Epic, Microsoft, and Varjo will be demonstrating XR applications across various platforms using the new standard at Siggraph.