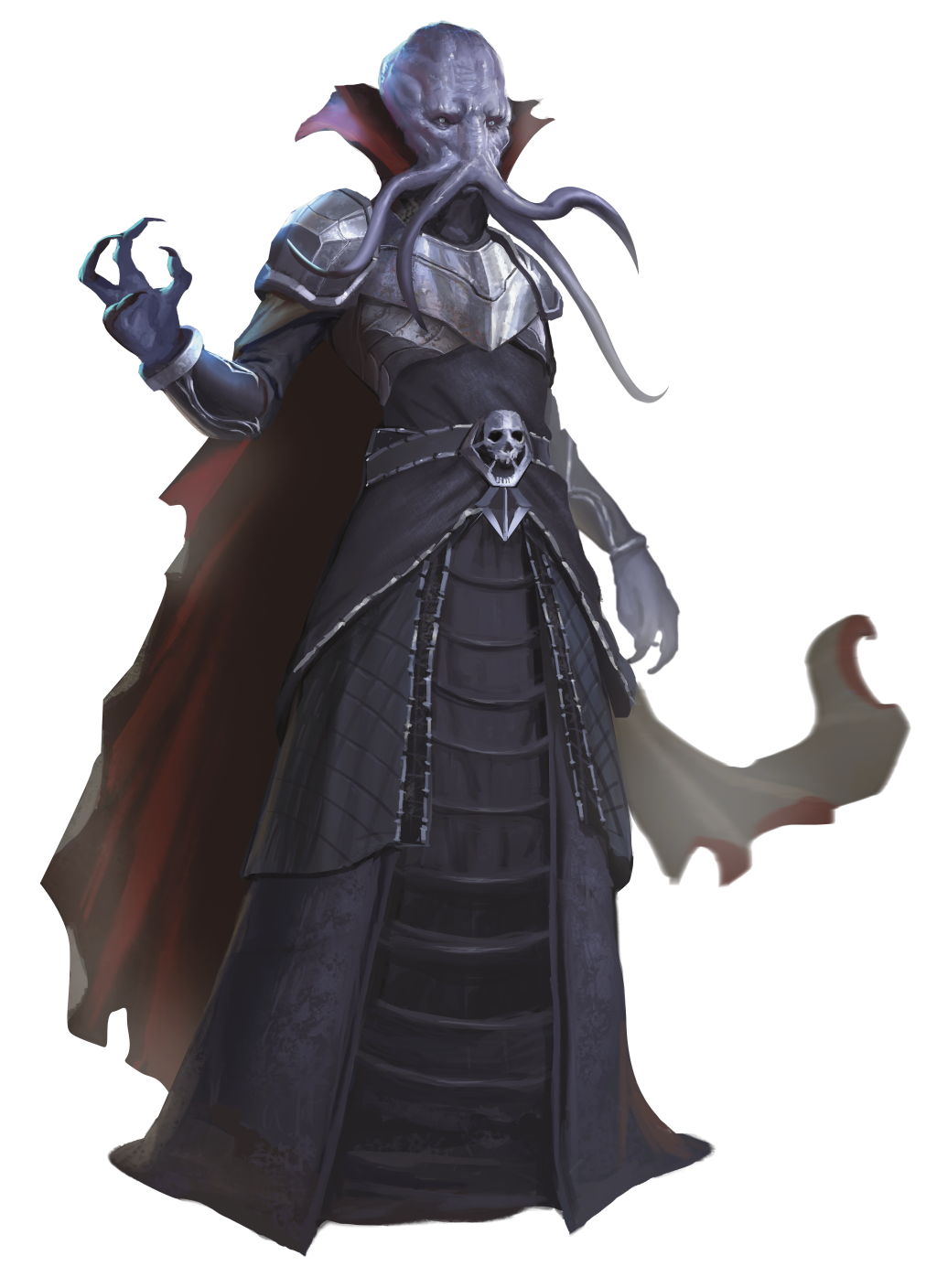 GamesBeat: While mind flayers do have gods, they don’t really “pray” or “worship” these beings, right?

Perkins: Mind flayer “gods” exist. What they are exactly remains ambiguous. They might be elder evils lurking in the far-flung corners of the multiverse, or they might be Far Realm entities reaching out to mind flayers through some sort of psychic connection. You’re right, though: Mind flayers don’t pray to gods or worship them.

Perkins: In Fifth Edition, we make no mention of illithid creeds as discussed in The Illithiad, partly because mind flayers already have an organizational structure based around colonies. That doesn’t mean the creed concept won’t resurface at some point.

GamesBeat: Do mind flayers still seek to extinguish the sun as a way to take over the surface?

Perkins: Volo’s Guide to Monsters describes the objectives of the mind flayers. Beyond their own preservation, mind flayers aim to rebuild their lost empire. This is referred to as the Grand Design, and it has subgoals (including the annihilation of those who would hinder the effort, in particular the Githyanki and Githzerai). Part of the Grand Design also involves transforming worlds into hospitable places for illithids to inhabit. Extinguishing a world’s sun is a great way to further this goal, as doing so snuffs out most other life on the planet and makes conquering that world easier for the illithids.

GamesBeat: Do mind flayers on the Sword Coast have an overarching goal, or do they seek a number of more individual agendas?

Perkins: The elder brain that oversees each colony has the Grand Design baked into its psyche, but also has an ego that feeds its desires and fears. Thus, an elder brain (and, by extension, the mind flayer colony around it) can have objectives beyond the desire to rebuild an empire.

First and foremost, the mind flayers of the Sword Coast seek to survive and protect themselves. One way of doing so is to infiltrate humanoid cities on the surface and enslave their leadership, thereby discouraging attacks on illithid outposts in the Underdark while also ensuring steady deliveries of humanoid brains.

Above: The elder brain dominates a mind flayer community.

GamesBeat: Is the realm of Bluetspear in Ravenloft the epitome of what a world or realm would look like under mind flayer dominance?

GamesBeat: Why do mind flayers enjoy experimenting with mortals so much? Is it out of seeking knowledge, or is it because they view humanoids as chattel?

Perkins: The horrifying truth about mind flayers is that we don’t fully understand their motives. Why are some humanoids turned into thralls, while others become hosts for illithid tadpoles? Ask yourself this: Why do human scientists experiment on small animals? What are their motives? Answer that question, and you get one step closer to understanding the illithid mindset.

One thing we know for certain is that mind flayers are far more intelligent than most humans, which makes them nigh inscrutable. Couple that intelligence with malevolence, and you can begin to comprehend what consumes a mind flayer’s waking thoughts.

GamesBeat: Why are the mind flayers of Ryxyg more peaceful than others? Why don’t they actively seek out slaves, as others do?

Perkins: You’ll have to ask the folks at Larian. Perhaps the mind flayers have eaten a few too many halfling brains, or maybe the mind flayers of Ryxyg realized that keeping slaves is a lot of work and might draw unwanted attention to themselves.

GamesBeat: Is Methhil El-Viddenvelp the most notorious mind flayer in the Sword Coast?

Perkins: Insofar as this mind flayer figures prominently in the Drizzt saga. However, most inhabitants of the Sword Coast wouldn’t know El-Viddenvelp (aka Methil), and that’s probably for the best.

Perkins: Not as a rule. Even a mind flayer that’s subservient to an elder brain has a brain of its own and is capable of forming opinions about other mind flayers, but it’s rare for a mind flayer to give much thought to creatures beyond its sphere of influence.

That said, almost every mind flayer considers itself to be more intelligent than most, if not all of, its so-called peers.

GamesBeat: Do mind flayers create things, or do they have their thralls do the work?

Perkins: Mind flayers are creative in their rather dark way, devising new inventions and horrors to unleash upon the world. However, they deplore “grunt work.” That, they leave to thralls and slaves.

GamesBeat: Can nautiloids, the spelljamming ships that illithids use to sail the stars, plane shift into the astral and other planes?

Perkins: According to Volo’s Guide to Monsters, illithid nautiloids can travel from the Astral Plane to the Material Plane and back again. One can presume it’s no harder for the vessel to travel to other planes of existence as well.

We might circle back around to this topic in an upcoming D&D product, though it’s too soon to talk details.