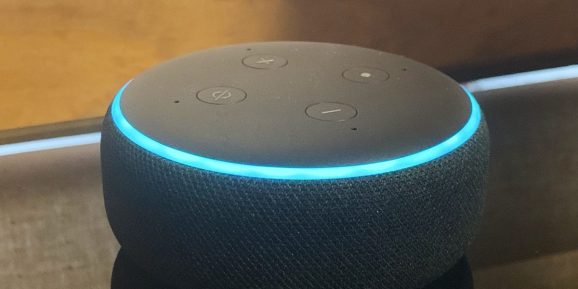 Not since the advent of the smartphone has a tech device been adopted as quickly as the smart speaker. In the U.S, ownership of smart speakers has been growing at a compound annual growth rate of 47.9%. Even more impressive, the global install base is expected to increase by 82.4% to 207.9 million by the end of 2019.

In real terms, 41% of homes in North America now own at least one voice-activated speaker, almost on par with the ownership of games consoles which can be found in 48% of homes. This is incredible when you consider that Amazon, which controls 70% of the market, only released the Echo three years ago. In contrast, games consoles have been around for almost 40 years.

According to the Voicebot Smart Speaker Consumer Adoption Report, more people used their smart speaker to play games than to research products, send messages, access their calendars and even listen to the news.

But voice-activated speakers aren’t just destined for the home. The technology is set to be integrated into everything from cars to earbuds over the coming months, which will surely put the install base for this nascent technology far beyond that of consoles. So what does this really mean for the games industry? The short answer – everything.

Much of the game industry’s recent growth has been driven not by “traditional gamers,” but by the billions of casual gamers and mobile users who have started playing games because they have finally become more accessible. Back in the day, gaming used to be a fairly niche activity requiring dexterous digits, expensive hardware, and a base understanding of how games work. As a result, video games went significantly more mainstream when the emergence of new devices and platforms started to break those barriers down and make gaming more accessible.

The release of the Nintendo Wii in 2006 was a key milestone in this evolution. It’s unique motion-based control system and range of simple fun games made the console a huge hit with audiences far beyond the traditional gamers. A year later Apple released the iPhone and the App Store. Together with the free-to-play model and the new breed of casual and touchscreen games made video games accessible to everyone and changed the direction of the industry.

Talking about an audio revolution

Compared to the 2.5 billion smartphones in operation globally, the smart speaker movement is currently just a blip on the radar. However, the rapid rate of adoption does suggest that voice-activated games could have a big future. The ease of access of voice-activated games will play a key role in achieving this. For example, playing games with Amazon Echo is as simple as asking Alexa to play a game and following the prompts. Games can also be accessed and activated through the Alexa app or through Amazon website, by searching through the growing library of game skills available and clicking to enable your selected content.

While many games are free-to-play or beta versions, some voice-activated games such as the Ellen Degeneres Heads-up! card game offer additional add-on content packs, which can be purchased via in-game voice prompts and billed through the users Amazon account. Already there are already over a thousand games available through Amazon’s Alexa. These include familiar names like Call of Duty, Skyrim, and Destiny 2, alongside a slew of indie titles like Earplay and The Magic Door. With Amazon aggressively investing in content partnerships with the world’s most recognized developers and IP owners, the number of games on the platform is expected to double over the next twelve months.

Because of the limitations of smart speakers, most audio games are either standalone interactive stories, or complementary content apps for existing digital games, movies, or books — like Fortnite Dropper Skill. For Google, Amazon and the audio game developers, the planets appear to be aligning at just the right time. Demand for audio-based content is soaring, with podcasts and audiobook usage continues to grow year on year, with smart speakers in prime position to benefit from our changing consumption habits.

The audio games sector is still in its infancy and despite the increasing availability of new content, a lot of that content is of a questionable standard. Discovering the good stuff can be challenging. This will change in time as the good games receive more positive reviews and the bad games get exposed.

Right now, the audio games space feels a lot like the early days of the free-to-play mobile games. Following the initial rush to get games out onto the smart speaker platforms, audio game developers are now beginning to look more seriously at how to make their games more engaging.

As with the early days of F2P, we’re now seeing audio developers look more seriously at how sophisticated engagement can help to optimize the player experience from day one of the design process. Developers are now using funnels and player segmentation to understand why players churn and how to prevent it. In addition, they are using analytics to understand which elements of the game content are popular with players, so that development resource can be focused on expanding the most appealing elements of the game.

While the monetization model in voice-activated games is currently unclear, we know from F2P that if you get player engagement right, then you create a solid foundation for good monetization.

New technology devices like the Wii and the smartphone made it easier for non-gamers to find and experience games. By using natural language, smart speaker games offer a nearly-universally understood and friction-free interface. With the financial clout of Amazon laser-focused on making a voice-activated future a reality, the prospects for the audio games sector sound extremely promising.

Mark Robinson is CEO of deep data analytics and real-time player marketing platform DeltaDNA, based in San Francisco and Edinburgh.