In yet another example of machine learning algorithms besting teams of highly skilled players, an autonomous system devised by Tencent’s AI lab yesterday defeated a human team in a five-on-five Honor of Kings match. The Hong Kong tech giant says the win demonstrates its AI’s ability to “solve [difficult] challenges,” and that it represents “significant progress” in the company’s exploration of strategic and collaborative AI.

For the uninitiated, Tencent’s Honor of Kings — or Arena of Valor, depending on the region — occupies the video game subgenre known as multiplayer online battle arena games (MOBAs). It’s enormously popular — it grossed nearly $2 billion last year, making it the top-selling mobile game worldwide — but more importantly, it’s an incomplete information game. Players are unaware of the actions chosen by other players and are forced to learn, analyze, understand, reason, and make decisions in real time, tasks that are considered grand challenges in AI research. 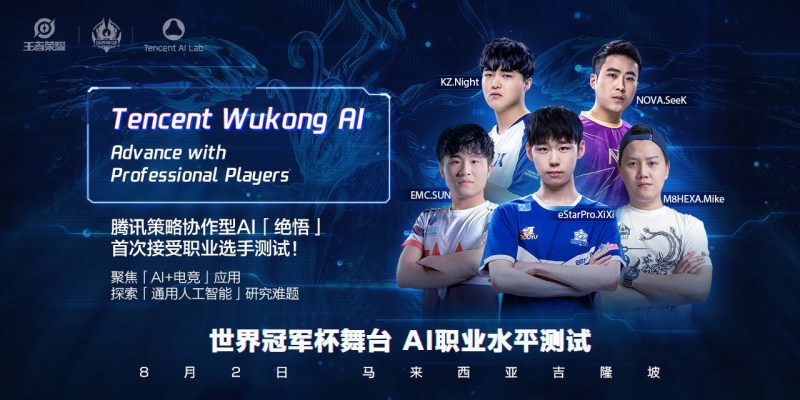 The AI in question — Wukong AI — faced off against human players during the semi-finals of the 2019 Honor of Kings World Champion Cup in Kuala Lumpur, Malaysia. Despite the complexity involved, the one-model system managed to skillfully plot out strategies as it selected hero characters and explored the game map.

Wukong AI’s several agents together beat the human team in just 30 minutes. And in a separate test at an event held in China, a Wukong AI model optimized for one-on-one matches achieved a 99.8% win rate playing games with the general public.

The key to Wukong AI’s success was practice. Lots of practice. According to Tencent, the system plays more than 400 years’ worth of games against itself per day, enabling it to learn basic enemy avoidance and damage-mitigation techniques over time.

Tencent expects esports will benefit from Wukong AI and systems like it, where they might aid in practice matches by providing real-time analysis and commentary on strategy. “Many AI researchers in the industry believe that the next AI milestone is likely to be born in a complex strategy game,” wrote the company in a press release. “AI … has the potential to be applied to [problems] with similar challenges.”