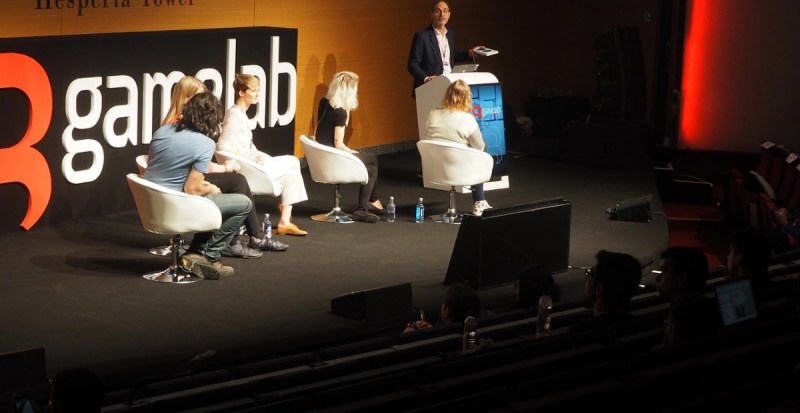 Ismail: That touches on an important part of this, which is having different ideas, different perspectives from the industry in a room is important for making good choices. It’s not just a thing that we do because it’s nice, or it looks good. It’s because it makes better games. It makes better products. It makes a better industry, a fair industry.

Are there any initiatives or pushes that you’re involved in that you think are things that people in this audience could learn from or implement things from? Obviously having those three examples is good thing for people to look at their own studios, their own companies, their own projects and say, “Here are some things we can improve.” Most of you here are independent developers? Raise your hand if you’re indie? Triple-A? Students? Cool.

Scott: The thing that’s worked the most for me — as you say, I work for a really big company. In fact, I worked on what I would consider to be all the most, you might say, masculine titles at EA? I worked on Battlefield, Medal of Honor, Need for Speed, and sports.

I’d say the thing that’s helped me the most and gotten the most traction is using questions as a way to lead to someone feeling like they’re not being attacked for what they’ve done with their decision-making. Instead of, “This character is crap, I don’t believe this character is authentic, and we need to do something with this,” I would say, “What have you done to ensure this character is authentic?” If the answer is, “Well, nothing,” they have that realization themselves. I don’t have to push in a negative way.

I talked about psychological safety being something important. Using questions as a way to educate has been a really soft and comfortable way to pursue this area.

Reading and learning are also really important. Every time I talk to students — I’m talking to a few of you now — ask questions of senior developers. Never be shy. Just ask. “Hey, how much money do you earn after how many years of experience?” Trying to have data about how the industry is doing right now, because the industry changes so fast, all the time. What was true last year, most of that isn’t true now. Always be curious about changes and trying to understand where the industry is going. 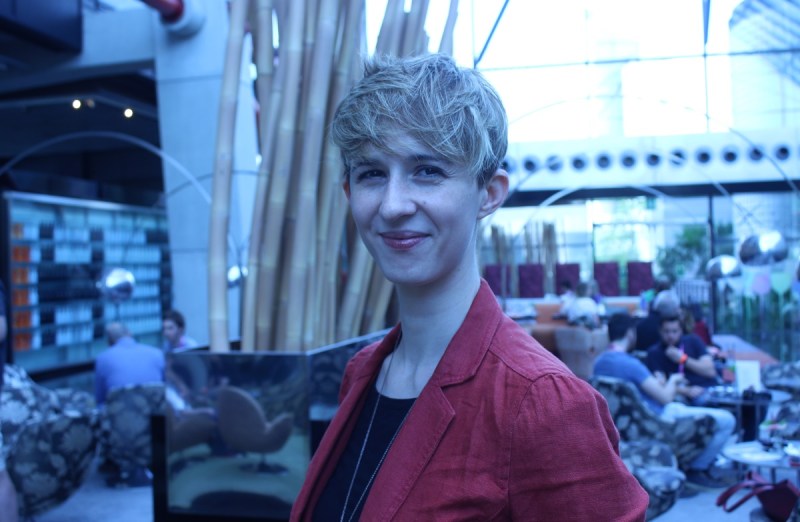 Above: Sarah Elmaleh is a voice actress in video games and co-organizer of GameDev.World.

Elmaleh: There’s this theme of curiosity, that empathy comes out of a genuine belief that someone else has something interesting and exciting to share with you and add to your game. I saw a lot of students. Be sensitive to the fact that great ideas from a game can come from anywhere and anyone, whether that’s on your team, or people in your life, or people who do other kinds of things. Especially in university, working with people in your theater department, working with people in architecture — games contain all of these disciplines, which is what makes them so exciting. See everyone, everywhere as a source for something that could be really exciting to you as an artist.

As a motivation, that keeps the impulse really clear and really exciting. It’s not just an obligation anymore. People who do different kinds of work, people who come from different backgrounds, everyone plays games. Your audience is very big now, and all the things you say will have an ear. Coming from that place of curiosity is an exciting way to engage with this initiative, across the board.

Edwards: A couple of things that I would add, from two different angles. The first thing is to recognize that everyone in this room is biased. We’re human beings, therefore we have a bias. We’re born with it. We grow up with it. We’re taught bias. We adopt bias based on where we’re from, the culture, the geography, everything about it. I see bias all the time, showing up in game design. I see it in the hiring practices in the industry. I see it in all kinds of manifestations.

The key is we have to be very conscious of our own bias. Really look in the mirror and be introspective about what kind of beliefs we hold that hold us back from accepting this person, that person, that viewpoint, from being open-minded. Not only just in our game design — for example, I demonstrate better diversity and inclusion in my game characters if the narrative warrants that – but also in the makeup of your company, the makeup of the people you hang out with. All of that informs your creative energy. When you surround yourself with diverse people, you definitely surround yourself with different viewpoints. All of that informs.

For anyone who’s an artist, for example, you probably — if you went to school for art, you took art history classes. I did at one point, back in my past. The whole point of art history class is to show you the diversity of human art from across the entire globe, and inform you about all these different styles that have taken place. In the same way, we have to recognize the fact that we might have a set way of looking at things, but it may not be the right way to look at things. That’s why a lot of companies like Facebook and Google and others in the tech sector in recent years have focused on the issue of unconscious bias in their company, in their hiring practices, because it’s become a really big issue as it affects inclusion.

The other part I would mention more from an advocacy standpoint to the point about Game Workers Unite and labor issues, there is a sense of justice in this industry that is coming. Everybody who is going into this industry or who is in it now needs to recognize that there is a wave of change that’s inevitable. Whether it’s implemented by Game Workers Unite or other initiatives or the legal defense fund I’m trying to get off the ground by game developers, there is a sense that’s time to change the way we manage production.

My advice is essentially, if you’re in an indie company, or even in a larger company, do the right thing. Remember that evil triumphs when good people do nothing. Don’t do nothing. Think about how you can be an agent of change, no matter where you are.

Ismail: Obviously there are a lot of things that people can do when they want to change things. For the audience, if there’s somebody in the audience that comes across something that is unjust, that is wrong, or that they feel excluded by, are there any tips that you’d have for how to deal with that? It’s a common problem, obviously. People run into these walls whether they’re women, whether they’re non-white, whether they’re not straight, whether they’re dealing with being a Spanish-speaking country in an English-speaking industry. There are ways people are excluded. What do you recommend if you’re feeling excluded yourself?

Edwards: One thing I would just briefly is that you should learn to be constructively blunt. You should say something. Don’t be silent. That’s number one. But if you do speak up, make sure you’re constructive, but be blunt. Be honest about how this is making you feel. Be honest about the effect of this on you or people you know. But you have to be constructive. Most people, we hear negative feedback or people calling us idiots on Twitter or whatever, and we don’t listen to that. People don’t listen to negative feedback.

You have to be constructive. “Hey, I love your game, but here are some things that bother me, and I’d recommend you do this instead.” Give that kind of constructive feedback. People are much more apt to listen.

Elmaleh: That’s the key thing. No one wants to feel like they’re not a nice person. It’s a very uncomfortable feeling to feel — look, I’ve grown up this way. I’m consistent with this value system. How can you tell me I’m a terrible person? I know myself to be nice. I know myself to be caring. And so then that delicate thing of saying, “Hey, look, you may not have been able to see this, but this behavior affects people in this way, and it might even be more consistent with your value of being nice if you add this layer to include people in your community more safely.”

Being aware that many people do see themselves as nice and allowing them to have that feeling, and then to find a way to work together to feel like you’re on the same page, I think that’s a place to start from. Having good faith, I think, is a good part of it, but setting the boundary really clearly. Because the loss is real. I come back to the right motivation for doing things. Human loss from the space is creative loss from your game, a loss of your audience. What we lose when labor conditions are bad or when people are feeling excluded is games. We’re losing games. If you care about games and being inspired by games or making them or having them played, that’s the kind of purity of why you try to extend yourself and put yourself into uncomfortable situations to include more people.