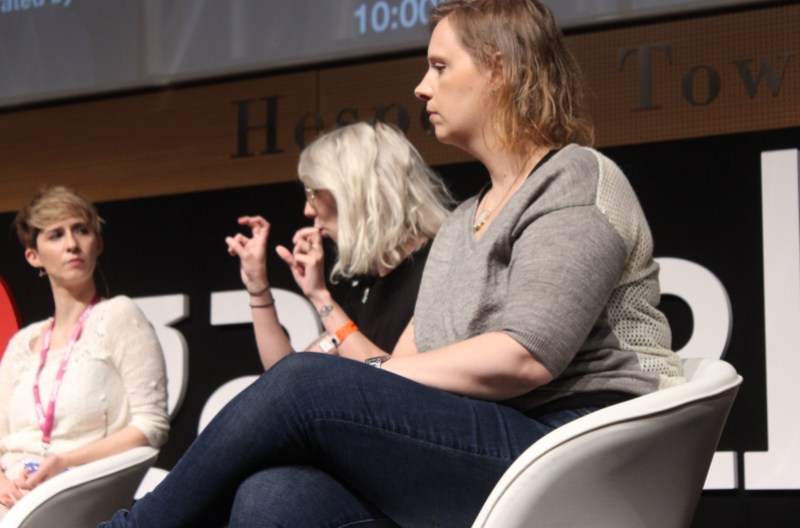 Above: Katie Scott spoke on a panel at Gamelab on inclusivity.

Scott: This is a long game. We’re at the beginning. This is the dawn of this recognition within our industry. If you always stay on the side of what you know is right and what you know is going to help other people, you’re going to take your lumps. There will be times when you’re going to softly confront someone about what they’ve said or what they’ve done, and you’re not going to get the response you want.

It may even lead to your career not doing what you want it to do because people think of you as a shit disturber, which is a fear that I have, and I have had. Kate and I were speaking last night about some things that occur in my workplace. I’ll come into work and think, “Today is going to be the day that you’re not going to send a ranty email.” [laughs] You’re going to be quiet and mature. And by lunchtime, I’m already writing it all down.

Ultimately you have to be real. You have to be yourself. You have to know what you believe is right and you have to pursue it. It will turn out in the end, because our journeys are obviously not these amazing — it’s not here to here and it goes really well.

Lachapelle: To your point, Sarah, about the way we use games — I wanted to push further around, it’s important to fight for what we think is right, because at the end, we’re losing games, but we’re also losing people who make games. The longest that someone is in the game industry on average these days is what, five years? People burn out. People get tired of overworking themselves.

I’ve been learning — again, by talking to students – that crunch starts at school. They’re overworked at school because when you’re a student you probably have to have a part-time job while you’re going to class full time. You learn from the industry because this is how the industry is. You have to work 80 hours a week to make a game. And that’s just not true. If you have a teacher telling you that you have to work 80 hours to make a game possible, because that shows you’re passionate, that’s bullshit.

If you want to fight, you have to fight for yourself, but also for your peers. We’re all in this together. We all want to have justice. We all want to make the industry as a whole better for everyone. I know that the work I’m doing right now with Game Workers Unite, I’ll probably not be the one who benefits from it. I’m already deep in the game industry. I’m old. [laughs] But I know that all of work will benefit the next generation and the generation after. I feel like I’m not really fighting for myself. I’m fighting for everyone else.

You mentioned being blunt about what you think is right. I gave that advice to a few people back in Montreal. If you want to go talk to your boss about something, always have paper trails behind what you’re talking about with your manager or other people. Try to have a buddy with you in meetings. It’s hard to fight by yourself, having a one-on-one fight with management. Having someone that’s with you, that can be accountable for you and help you — a lot of the time, when you have one-on-one meetings with your boss, they can try to gaslight you. “No, that never happened. I never told you you’d have a raise.” Always try to keep solidarity. 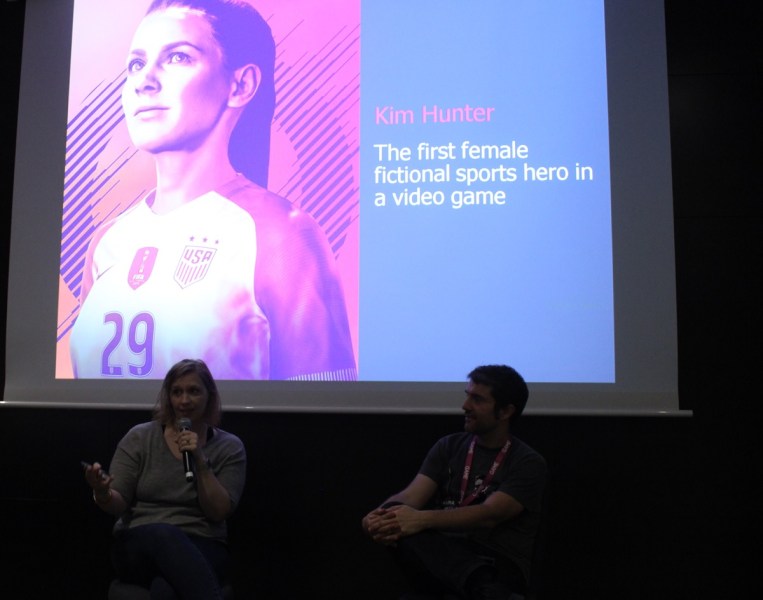 Above: Katie Scott (left) speaks at Gamelab about female characters in soccer games.

Elmaleh: Solidarity helps reinforce your courage. This takes a lot of courage. It takes courage to speak out and it takes courage to receive correction, in both directions. Feeling that sense of community around you and deepening your conviction — I think that conviction comes before courage. You have courage on the basis of believing this is important and true, no matter how many stumbles you take to get there. The best way to do that is to feel a sense of community and alliance with your fellow creatives and your fellow teammates, or other people who believe this is an urgent thing to do.

Ismail: In your answers, I heard the words “fight” and “courage” a lot. These are not easy things, as Myriame just pointed out. Obviously, for a lot of people in the audience, and for myself, we want to do things right. Katie touched on the safety to be able to try things. These are difficult things. It’s not always easy. It’s not always going to go right. Is there any encouragement you want to give people before we wrap up? Why this matters and why they should fight.

Edwards: From my perspective, when I give talks related to these issues around advocacy, I often use the term “righteous rage” as far as describing my feeling. It’s not enough to be angry. A lot of us get angry about a lot of stuff. You just have to look at Twitter to find angry people about all kinds of things. But anger without direction is worthless. There’s nothing wrong with anger, but anger needs to be focused. It needs to be focused in a direction of a solution.

That’s why I talk about righteous rage. Yeah, sometimes maybe that’s not the right term to use, but it resonates with me because I know that I do believe that certain things are always right or always wrong. It’s always wrong for a publisher to screw an indie on a contract. It’s always wrong for management to force people to crunch ridiculous hours. It’s wrong when companies purposefully try not to be diverse and inclusive in their content and in their workplace. These things, to me, are always wrong.

I know that part of what drives me is taking on this idea of being a creator advocate, not some kind of warrior poet. You’re not just creating games. You’re also advocating for a whole new future because games are the current evolution of human narrative. That’s what you do right now. It’s not an insignificant thing. We take that seriously and we take on this idea that I’m not just creator. I’m also a creator advocate. I know that certain things I’m doing are right.