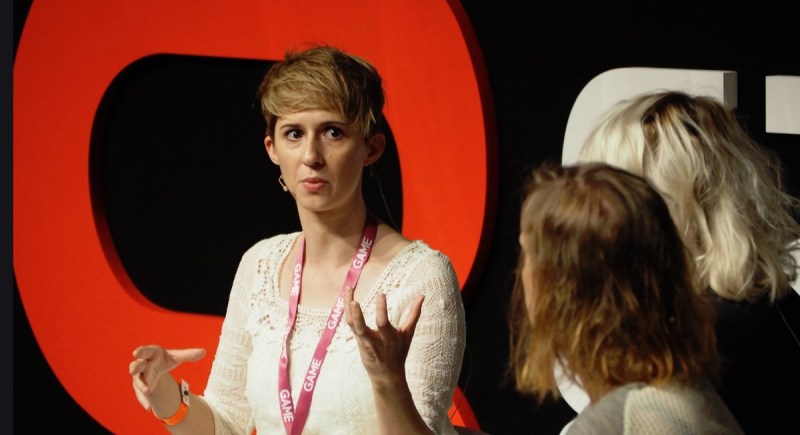 Above: Sarah Elmaleh has been the voice of characters in games like Gone Home and Anthem.

Elmaleh: It’s so funny that you talk about righteous rage because I feel there’s a distinct split in my personality. For advocacy, I tend to be extremely soft and take everyone in the best possible faith and believe that we both have the same goal. We’re just going to talk it out and figure out how to get there. But in games, I always get cast for righteous rage. [laughs] I feel like maybe I just put that part of my feeling into games and kept it separate. The Viking raider in For Honor is all about righteous rage. That’s funny.

But I do think there’s room for both styles. Sometimes you need people to heal and to be patient, and sometimes you need people to rail and be firm. Find which one speaks to you that comes to you more naturally. Pair with other people, so that every context has the right person to do the job. When someone says, “Hey, no, you’re acting in bad faith, and I need a warrior now,” you have a warrior now. When someone is saying, “I’m trying really hard, I’m just making mistakes, and I feel really isolated because no one’s being patient with me,” be that person. I really do think it takes all kinds of people to move this forward. Different contexts call for different things.

Scott: Recognize the maturity of whatever entity you’re dealing with. If your company or your school or wherever you’re working is not super-woke on this topic, you can start a little bit smaller. You can start with something that’s an easier change, instead of going straight for the throat, because obviously, all you’re going to get is pushback.

Lachapelle: Starting small, slowly building the trust that collectively we can change things. What about free coffee? And then going further. What about a raise for everyone? It’s a good point, starting small and building on that.

I’m not sure if I’m answering your question correctly, but I’m very open to talking about mental health in games. We don’t take care of ourselves. Everyone in this room is bad at taking care of themselves. [laughs] Fighting, just being angry, it’s very tiring. It’s important in those fights to know about how to take of ourselves. You will get tired. You will get overwhelmed. You’ll cry and be angry — at yourself, at other people. It’s important to take a step back sometimes and let others take the fight for you. Recharge. Read more about whatever the issue is. The more — not relaxed, but the more rested you are, the better you can fight after that. Then someone else can step down and take a rest and then go back and fight with you. It’s very important to take care of yourselves. 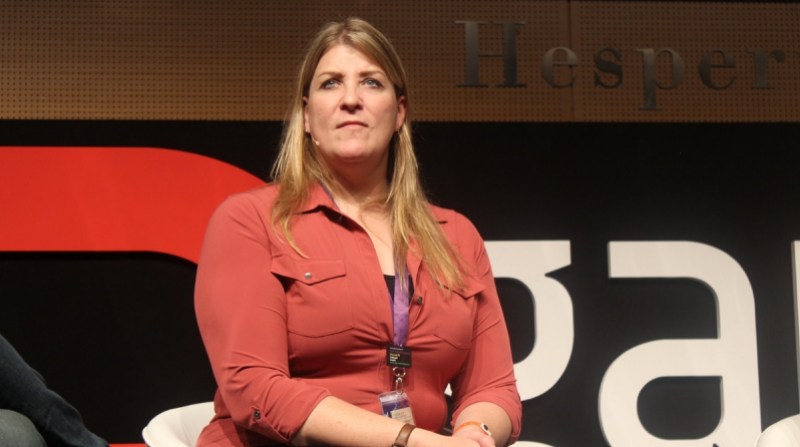 Above: Kate Edwards of Geogrify.

Elmaleh: Talking about it is how you attract people to see each other and feel that sense of community. If you feel these things, start talking, and you’ll find each other. Pay attention to who’s saying these things and connect with them. Feeling seen is the first step to building that community that gives you the collective resource to do good works.

Scott: Your question was about encouragement. When I started on this journey, I couldn’t have even imagined where it would take me. I mentioned last night that being involved in this space is a privilege. It’s a privilege to pioneer something that’s never been done before. Most people in their lives will not get the opportunity to change something for the better, for humanity. I encourage you to get involved in this because it’s been such an amazing thing for me. The reason I’m here on this stage is because I decided I would get involved.

This topic is ripe for your involvement, especially if you don’t actually feel underrepresented. I’m desperately waiting to encounter someone who is actually on the side of this and is approaching it through empathy, rather than their own personal experience. Those people especially can make this a really big deal. It’s fun. It’s cool. Come with us.

Ismail: For all of you, just from me personally — our medium right now is probably the most important medium on the planet. I don’t know if you remember when you first started playing games, but there must be that one game or that one thing that connected with you, that made you feel like, “Oh, I could make this. I can do this. I can be part of this.”

I think what all of us are talking about is making sure that for everyone, there is that game. But then also, when they look at our industry, they see somebody that looks like them, that sounds like them, that thinks like them. Not only do they see a game and wonder, “Can I be part of this?” but they see the game, take one look at the game industry, and they know they can be part of this. For the future, we’ll have all types of games from all types of people.