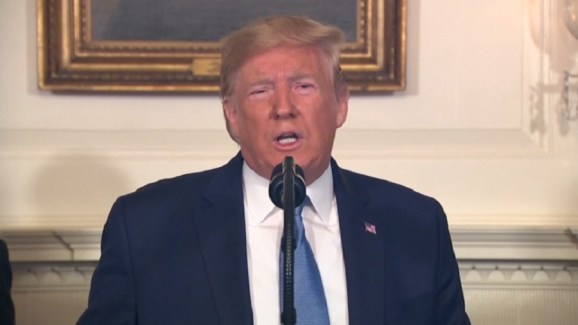 U.S. President Donald Trump condemned the role that video games play in creating a culture of “the glorification of violence in our society” and said it has to stop during a White House briefing today.

He did not offer further details on actions to take regarding violence in games. The comments were part of a broader call to react to the mass shootings over the weekend that left more than 80 people dead and wounded in Dayton, Ohio, and El Paso, Texas. Those two shootings were part of 249 mass shootings involving four or more injuries since the start of the year in the U.S, according to the Gun Violence Archive.

During his speech, Trump said, “We must stop the glorification of violence in our society. This includes the gruesome and grisly video games that are now commonplace. It is too easy today for troubled youth to surround themselves with a culture that celebrates violence. We must stop and substantially reduce this and it has to begin immediately. Cultural change is hard but each of us can choose to build a culture that celebrates the inherent worth and dignity of every human life. That’s what we have to do.”

At the outset, he called for detection of early warning signs about possible shooters, including calling on social media to detect those warning signs. He also called upon treatment of mental illness. He called for “red flag laws,” or extreme risk detection that allows for the seizure of weapons. He blamed the internet for stoking hatred and condemned both white supremacy and racism.

“Mental health and hatred pulls the trigger, not the gun,” he said.

In response, the Entertainment Software Association said in a statement, “As we shared at the White House video game meeting in March 2018, numerous scientific studies have established that there is no causal connection between video games and violence. More than 165 million Americans enjoy video games, and billions of people play video games worldwide. Yet other societies, where video games are played as avidly, do not contend with the tragic levels of violence that occur in the U.S.”

The ESA added, “Video games contribute to society, from new medical therapies and advancements, educational tools, business innovation, and more. Video games help players connect with family and friends, relieve stress, and have fun. We encourage parents who have concerns about age-appropriate video game content to visit ParentalTools.org to learn more how to control what games are played in their homes.”

And on Sunday, Nika Nour and Renee Gittins, the leaders of the IGDA Foundation and the International Game Developers Association (respectively), said in a joint statement, “Our deepest condolences and hearts go out to the victims and families affected by the tragic events in Dayton, Ohio and El Paso, Texas. Society has endured too many senseless acts of violence and horrific mass shootings. Blaming video games distracts from the broader issues at hand. There is an overwhelming amount of research that finds there is no evidence linking video games to violence. Video games do not cause violence, and we support efforts to discontinue this misguided information.”

The game industry has long pointed out that the easy availability of guns in the U.S. is likely a bigger problem than violence in games, noting that the U.S. is the only nation that has been suffering mass shootings on a daily basis, even though citizens in other countries are big consumers of video games. The National Rifle Association has deflected that criticism and blamed violent video games and other media for the cause of violence. There’s a long history of partisanship over blaming violence video games for real-world violence.

“Trump blaming video games for the ‘glorification of violence’ is classic projection,” said Max Schaefer, a video game creator and CEO of Echtra. “He openly encourages and promotes violence and hatred at his rallies. Every country has video games, every country has mental health issues. But only the USA has these mass shootings.”

“The game industry continues to fail to advocate for itself, time and time again. Rather than proactively refuting these arguments, we sit back and wait for another incident to speak up, release our statements of sympathy, and then go back to the status quo,” said Kate Edwards, founder of Geogrify and former executive director of the IGDA. “Games are a massive cultural and economic force, but we as an industry fail to live up to the responsibility that comes with that. The evidence against the games and gun violence correlation is clear, but when are we ever going to address it more proactively and publicly (i.e., take our case to the game playing public and the voters)? Until we find the courage to do so, and to speak up as individual game creators and not just as associations, we are doomed to repeat this blame cycle over and over again.”

Stephen Kleckner, freelance game writer and artist, said, “I like to think that, in 2019, the majority of America’s parents come from generations that were raised heavily around video games, and that the average adult is a lot more ‘game literate’ than perhaps our Baby Boomer parents and grandparents were. So maybe this incredibly played out blame shift won’t gain legs with the majority of adults like it did in previous decades? But even if we live in a world where every single American rolled their eyes at the ‘blame games game,’ this scapegoating has bought politicians half-a-day’s worth of distraction from discussing real solutions to our home-grown domestic terrorism problems.”