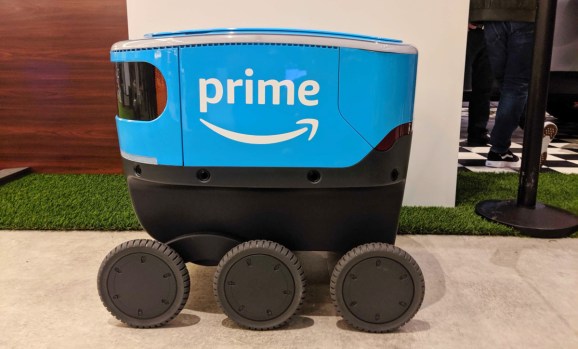 It won’t be long before Scout, Amazon’s autonomous delivery robot, starts roaming the streets and sidewalks of neighborhoods across the country. Amazon announced that its driverless rovers will begin ferrying packages to select customers’ doorsteps in portions of Irvine, California this week.

“While in the Pacific Northwest, Scout has experienced all of the region’s weather — from the expected rain shower to the infrequent sun, and even the biggest snowstorm the area’s seen in the last decade,” wrote vice president of Amazon Scout Sean Scott in a blog post. “It’s now time for Scout to experience a little more sunshine.”

Initially, a “small number” of Scout devices will transport packages Monday through Friday during daylight hours, according to Amazon. Shoppers can order as they normally would, with delivery options including same-day and one-day service for Prime members, and packages will be delivered either by one of the company’s carrier partners or by a Scout robot accompanied by a human minder.

For the uninitiated, Scout is a watertight, six-wheeled, cooler-sized drone that was developed, built, assembled, and programmed in-house by Amazon engineers. It’s designed to be robust, with wheels made of material firm enough to survive the rigors of daily sidewalk driving, and it packs cameras, ultrasonic sensors, and other sensors that enable it to detect and maneuver around obstacles in real time.

Amazon has been piloting a fleet of six Scout units just outside its headquarters in Washington state for the better part of months, transporting them in a van they are return to after they’ve dropped off a customer’s package. In addition to real-world testing, the Scout team is experimenting with simulated sidewalks built in the lab and training the AI models that guide the robots down suburban streets with a pipeline that generates virtual environments that mimick neighborhoods.

“We’re constantly thinking through how our Scout devices will integrate into the neighborhood and delight customers. It’s the reason we developed Scout from the ground up with safety and convenience in mind,” wrote Scott. “We’re still in field test mode, and our expansion to the Irvine area is just another in the many steps forward for this new delivery system. The future is right around the corner, and we couldn’t be more excited.”

It’s worth noting that Amazon is far from the only company vying for a slice of the lucrative autonomous delivery market, which is filled with well-funded startups like Marble, Starship Technologies, Nuro, Robomart, Boxbot, Dispatch, and Robby, not to mention FedEx and Postmates.

That’s all to say that it will likely be a while before Scout starts making deliveries nationwide (or even in more than a handful of cities), and when it does, it won’t be the only delivery drone on the block.